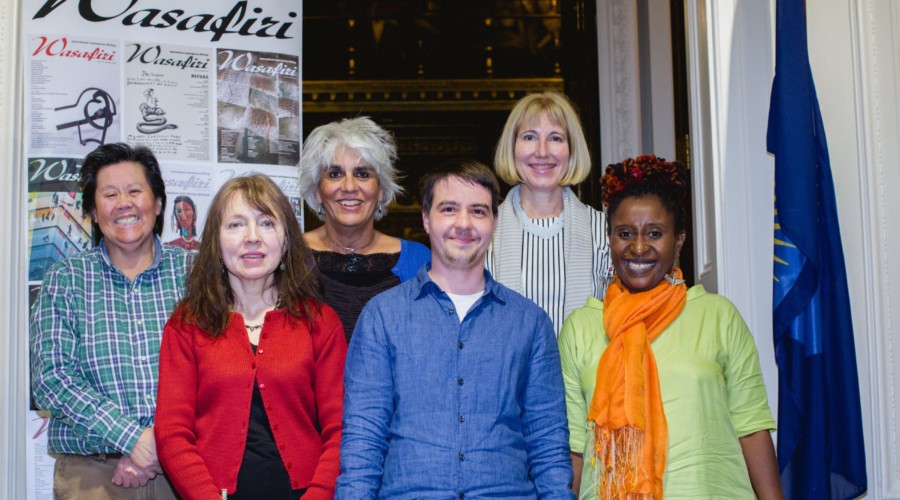 The 2018 Wasafiri New Writing Prize winners are announced with winners in the following categories: Fiction: ‘Plunder’ by Deirdre Shanahan; Poetry: ‘In the Garden Where the Gorgons Live’ by Daniella Shokoohi; Life Writing: ‘Diary of a Teenage Boy’ by Len Lukowski.

The three winners will be published in print by Wasafiri and receive a cash prize. They will also be offered the Chapter and Verse or Free Reads mentoring scheme in partnership with The Literary Consultancy, dependent on eligibility.

The judges of this year’s prize are Kerry Young (Fiction), Malika Booker (Poetry) and Elleke Boehmer (Life Writing). Each entry was judged blind and the winners for each category were decided by all three judges and the founding editor of Wasafiri and Chair of Judges, Susheila Nasta. Speaking on the prize this year, Susheila Nasta said, ‘representing fresh perspectives from around the world, this year’s entries were both innovative and ambitious, passionately engaging with subjects that are key to contemporary life and the conflicts of our times.’

The winning Poetry entry ‘is a mesmerizing poem that renders a beauty even while describing pain. From the first line you’re caught and taken on a journey. It’s a strong lyrical poem, but also experimenting and pushing,’ as described by judge Malika Booker.

Kerry Young said of the winning Fiction entry, “‘Plunder’ was original and fluently written with meticulous observation. It was engaging and poignant.”

On judging the winning Life Writing entry, Elleke Boehmer said, ‘The judges were impressed at the sensitivity and economy of this story. In particular, they commended how the story took us into the central character’s world and perspective, and shared its dilemmas over fallible memory and shifting identity in fresh, illuminating ways.’

This year’s prize event took place at The Blenheim Saloon within Marlborough House, with thanks to Routledge, Queen Mary University of London, Arts Council England and Commonwealth Writers, the cultural initiative of the Commonwealth Foundation. Testimonies from last year’s winners Julie Abrams-Humphries and Mehran Waheed about the impact of Wasafiri’s New Writing Prize on their careers were played to the audience, before each judge announced the winning entry in their category.

Now in its ninth year, the Wasafiri New Writing Prize was launched to support new writers, with no limits on age, gender, nationality or background. With a list of high profile judges over the years including Brian Chikwava, Colin Grant, Maya Jaggi, Jackie Kay, Tabish Khair, Toby Litt and Blake Morrison, the Wasafiri New Writing Prize has boosted the confidence of writers in competitive times. The 2018 prize attracted entries from nearly one third of the countries in the world, with entries from a total of sixty countries.