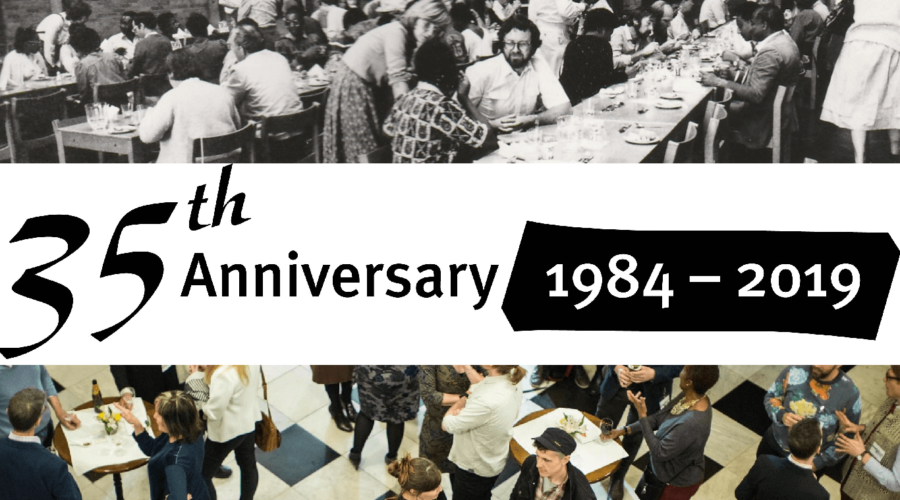 You may have seen it lurking at the edges of articles, hashtagged at the end of tweets or cited in wider references to Wasafiri. It’s been stated, but adjacent, the guiding principle of all our activities over the past several months, but, perhaps, sometimes, a little bit quiet: 2019 is our 35th anniversary year.

I write this as an election result that everyone expected has arrived but feels, for many, no less shocking for its long anticipation. Outside the window things continue as they did: the sun’s high, buses roll, and passersby stroll along the Mile End Road; but on screen everything’s activity, excitement, anger, action, disappointment.

Wasafiri launched in 1984 into what was both a very different and very familiar world. The magazine began as the journal for the Association for the Teaching of African, Caribbean, Asian and Associated Literatures (ATCAL). Then only six years old, and already near the end of its life, ATCAL aimed to advocate the works of writers from its focus regions to be included on school and university curricula. The organisation fought to assert the value and importance of these works at a time when black and Asian people in particular had their allegiance to Britain, and simple identification as ‘British’, regularly questioned; the esteem granted to writers from these and other non-white communities often fleeting, and usually tenuous.

ATCAL’s interest was the literature of diasporic peoples and what it called ‘our own Black British artists’. By championing these works, the organisation championed these communities – as important, unique contributors to national and global cultures. Wasafiri was, at its start, an extension of this advocacy. When ATCAL closed due to a lack of funding shortly after Wasafiri’s launch, the magazine continued its work, consistently making a place for writers marginalised in Britain’s literary mainstream, year after year widening its scope to include steadily more of the world’s writers working in English and, eventually, in translation.

On screen it can feel like the mid-1980s have been reborn but remixed. Funding for the Arts is continually cut. Far-right governments are merrily driving wedges between communities — often between people living side by side. Economic uncertainty extends endlessly. An emerging Anglo-American alliance, built not on desires to increase opportunities for all, but on a commitment to cementing privilege, seems anxious to take the stage.

Yet still, many things have changed – not least the power and the volume of the voices of those that ATCAL first and Wasafiri later sought to amplify. The literary world has morphed; its boundaries have flexed. Critical idioms have developed to better assess writing and writers who, back then, could be easily dismissed. In Wasafiri our content has moved from stating that marginalised voices – in particular those marginalised by ethnic origin or country of birth – belong on syllabi, to demonstrating ways they may be approached, thought with, critiqued, and celebrated, while taking for granted that they matter.

An Island Full of Voices

Still, as remains clear, for all advancements on ‘diversity’, for all the switches in terminology and alterations in acronyms, the change we’ve seen often feels belated, inadequate, fragile.

2019 is Wasafiri’s anniversary year. And for the months that remain we’ll be actively engaging with all above – from our founding mission to the needs of our current communities  – considering artistic, social and political developments internationally from 1984 to 2019. Turning to our contributors and our readers across the globe, we’ll be working to use reflection on the past as a staging ground for the consideration of better futures through a number of special activities and events.

From this month, our website will feature a Writing Britain Now series that highlights new works from across the country that are thinking through the complexities of life in the contemporary UK. We’ll also be opening up our archive, offering free access to author interviews from our back issues – one for each of our 35 years – in order to circulate the thoughts of some of the world’s leading authors of the past three decades.

On the 6 and 8 of October, we’ll be hosting two events, ‘Making Writing Work’ and ‘Writing in Exile’ at the Birmingham Literature Festival, which will, respectively, consider how to break into and stay within the literary world, and how exile status shapes reception and content and creates the potential to challenge orthodoxy.

On 15 October, with London’s Free Word Centre, we’ll be running a special event called ‘Writing Our Way Home’ on how literature can foster belonging, and create and restore communities.

In November, Susheila Nasta, our Editor in Chief, will launch her new anthology with Myriad Editions, Brave New Words: The Power of Writing Now, which features leading contemporary writers experimenting with the personal essay to consider the conjunction of writing and politics.

We’ll also launch our landmark 100th issue, ‘An Island Full of Voices: Writing Britain Now’. The issue invites over 40 contributors, including Maya Jaggi, Jackie Kay, Ngũgĩ wa Thiong’o, Diana Evans, Winnie M Li, and many many more, to think about the possibilities and obstacles within contemporary Britain for the kind of innovative writing from global voices that Wasafiri has long promoted.

And to connect everything, we have two major events to premiere Wasafiri 100 and Brave New Words. The first, ‘Reimagining Britain’, on 8 November, is a one-day symposium at Queen Mary, University of London, on the current climate for artistic and cultural production in Britain; the second event, ‘An Island Full of Voices: Writing Britain Now’ at the British Library, on 9 November, will announce the winners of our tenth New Writing Prize and bring together a wide range of contemporary writers, including Caryl Phillips, Bernardine Evaristo, and Nikesh Shukla, for a half-day festival of workshops, readings, talks, debates and discussions around the theme of our anniversary year: ‘Writing Britain Now’.

At Wasafiri we have been and remain committed to discovering, promoting and supporting the best new writing, in all genres, from across the globe. It’s been a turbulent 35 years, but throughout we have advanced and fought for ideas that have only sometimes been in vogue: the need to broaden the boundaries of local and national identities, the role the arts can play in creating new ways of seeing, and the value, if not necessity, of crossing borders and cultural travelling through the written word.

This year, we’re excited for you to join us in looking back so we can all move forward.