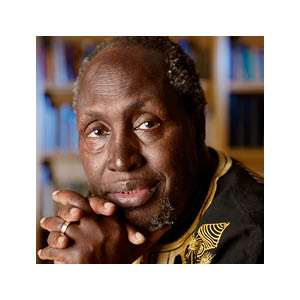 Ngugi wa Thiong’o is one of Kenya’s best known novelists and activists who campaigns for ‘cultural decolonisation’ in Africa’s educational institutions and the promotion of African languages — the subject of many of his essays including those that appear in Decolonising the Mind (1986) and Moving the Centre (1993).

His first novel, Weep Not Child was published in 1964. This was followed by The River Between (1965), A Grain of Wheat (1967) and later Petals of Blood (1977). His insistence on writing in his native language, Gikuyu, led to his imprisonment in 1977 when he produced a Gikuyu play at the Kamiriithu Community and Education Centre, an activity deemed subversive by the Kenyatta-Moi regime.

During his year-long detention in a maximum security prison he wrote Devil on the Cross. Ngugi’s latest epic novel, Wizard of the Crow was published in 2006. He has received many awards including the 2001 Nonino International Prize for Literature and several honorary doctorates.

Ngugi has been on the Advisory Board since 1996 and is currently at the University of California, Irvine.

Visit his site at www.ngugiwathiongo.com.