Indian silent movie featuring a ‘passionate kiss’ to be restored 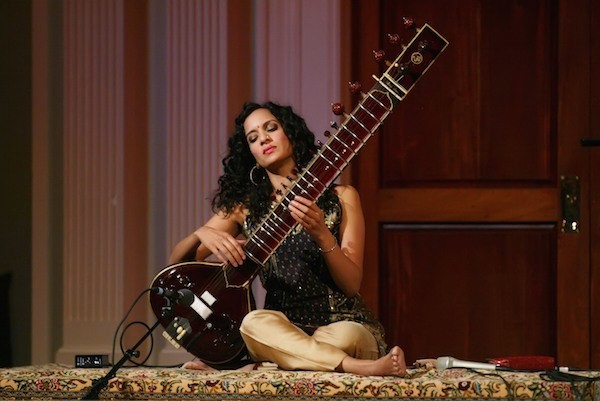 Shiraz, a silent-era Indian film which features an early on-screen kiss, is set to be restored by the British Film Institute with a score composed and performed live by Anoushka Shankar. The film, which will be screened in London and Agra, India, later this year, is among the highlights of the UK/India 2017 Year of Culture programme, announced by the British Council, the Indian High Commission and the BFI.

The film is a historical romance set in the Mughal Empire, and is based on the life of Empress Mumtaz Mahal, for whom the Taj Mahal was built. It was made in 1929 and starred the actor-producer Himansu Rai. Shankar said was looking forward to writing her first film score: “Shiraz is a beautiful love story, and the love story that instigated the building of the Taj Mahal. It spans the rural to the majestic, with intimate village scenes and also epic palaces. There is so much scope to play with those scales as a musician.”

Shankar added that she was surprised by the on-screen passion in such an early Indian film, although she was aware of the eroticism inserted to films of the same generation that were made in the West: “For me, the kiss was fascinating. An old Indian film where there is a passionate kiss literally made me gasp. It’s not what I’m used to seeing. I’m used to seeing that in the West but not in Indian films [of that time]. I wonder how to play with that musically.”

Shiraz was a British, Indian and German co-production, photographed entirely on historical sites in the subcontinent with an all-Indian cast and a mostly German film crew. Rai, its star and also its producer, made both Shiraz and The Light of Asia (1926) specifically for export to international markets. Rai became one of the major influences in Indian filmmaking with the formation of Bombay Talkies in 1934.

Shankar also spoke of her father’s seminal film score for Satyajit Rai’s Apu Trilogy, and revealed how her father produced the entire score for Pather Panchali (the first in the trilogy) in under a day, watching a scene and composing its music on his second viewing of it. “As a composer he was very intuitive. He composed the whole first film in eight hours.”

Among the other highlights for the cultural exchange programme between Britain and India is the digitisation of film reels and home movies that stretch back to 1899 and include startling, poignant and never-before viewed scenes of ordinary, pre-Partition life. Archive material includes scenes of women at work in Rajesthan from 1920, a cavalcade of ceremonial elephants carrying maharajas from 1922, dancers in Kerala from 1946, a goat-herder on the streets of West Bengal in 1913, and families in the Hunza Valley in now-Pakistan in 1937.

Robin Baker, the BFI’s head curator, said that alongside this digitalised archive, and premieres of major Bollywood productions, they would also screen the work of edgy film-makers grappling with issues around caste, homosexuality and feminism, and showcase the work of a new generation of filmmakers “who are playing such a wonderful role in changing the Indian film industry and showing how the trauma of Partition has also changed Indian cinema.”

The British Library will host the Jaipur Literature Festival in May.

The Science Museum will open a series of exhibitions and events in September.

The British Museum will stage a landmark exhibition – India and the World: A History in Nine Stories.