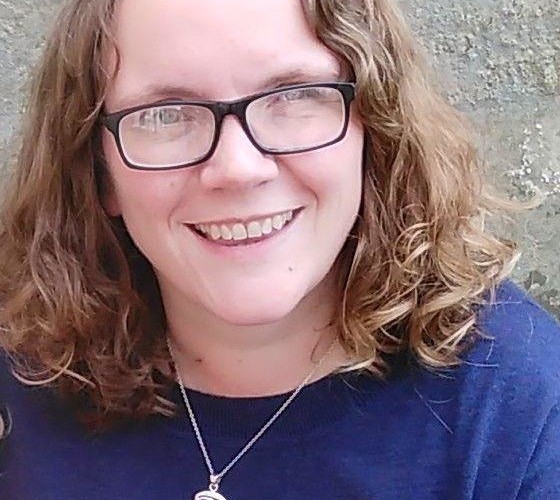 Alice Curham lives by the sea in Kent with her partner and son and three goldfish. She has had poetry published in Dream Catcher and Red Pepper magazines and been shortlisted in the Gladstone’s Library Short Story competition and longlisted for the Plough Prize.

The fair-haired girl took her for her first shower. She didn’t know her name or what she did, but she knew she was kind: when they had to take the drains out of her stomach (And we just pull them – pop! – like that. No need for pain relief.) the nurses had all crowded round the bottom of the bed but the fair-haired girl had headed towards her and held her hand.

And so she was kind in the shower: shampooing her hair deftly to avoid the line that hung like some crazy 1980s chandelier earring, only out of her neck, not her ear. Letting her soap herself and all the while chatting easily. There was no discomfort, only pain.

If I hadn’t done this I wanted to be a hairdresser, the fair-haired girl confides, wheeling her back to the ward clean and dry and in a fresh nightie. You want me to blow dry your hair?

She is usually awake for morning handover, could hear them outside the door telling her story. Always ending with:  and she has a three month old baby boy.

But this morning they came in to do it and she is grateful; she’d been feeling sick since she woke up and it was getting worse.

They hand her one of those cardboard bowls that look exactly like a hat and sure enough. Once. Twice.

It’s bile, the nurse says. That means your stomach has gone to sleep since the op.

Nice, she thinks. Like an animal curled up somewhere warm and dark, dozing.

A plastic tube in her nose and down the back of her throat. She swallows plastic and feels it inside her. They clip a bag to the end that comes out of her nose and she watches it fill up with bile, slowly.

When the bag is gone but they’re not sure if her stomach is awake yet (she no longer thinks kindly of its sleep) they tape the end of her tube to her nightie. One nurse tapes it wrongly and all day she can’t quite lift her head. Another nurse complains and she wants to say, I don’t want to lift it anyway.

The morphine makes her weird. A little while after they’ve given it she closes her eyes and sees them again. The morphine men.  Small, dark silhouettes rushing towards her.

Over them she hears her mother’s voice, reading. And in her hand she can feel her son’s hand. It feels soft as she strokes it.

Her mother, her partner and her baby visit every day. They lay the baby on her bed – she can’t hold him any more – and she watches him kicking, trying to roll.

She worries he will forget her; it had only been three months, after all, and surely she wasn’t recognisable now? Too many tubes and the smell of hospital in her skin.

One day he started to cry so she began to sing a song they’d learnt at one of the baby groups they went to. He stopped crying immediately and stared straight at her. She couldn’t carry on.

The first time she went to theatre it was for the main operation. All day the pain inside her had built until a nurse said, she can’t take it anymore. I’m ringing them up.

They changed her into a gown with no sleeves that tied at the back. A porter came and wheeled her down in the bed.

At the door to the theatre the plump Indian doctor appeared. It’s gone too far. We can’t do keyhole, we have to go straight in.

Then a man said, breathe this for me. It’s oxygen. She knew it was anaesthetic and wondered why he lied but she breathed it in anyway.

In Recovery she woke up to a man asking her where her partner worked. There was an oxygen mask on her face and alarms and bleeps echoed in her head.

Second time in theatre, having the line put in her neck, and the young doctor chatted throughout, even as he turned her head to one side and covered it with a plastic sheet to keep everything sterile.

Somehow it came out that today was her birthday. The usual jokes and commiserations were made – she’d been hearing them all day. No use crying now. Once the procedure was finished the doctor disappeared. And reappeared, clutching a bar of Fruit and Nut. I’ve always wanted to do this for a patient on their birthday, he said.

When she had the nasal tube in all she craved was Rice Krispies with fresh, cold milk. And when they took it out (pop! like the drains) she had a bowl, but they were soggy and the milk was warm.

Her body is new to her now:

Bruises on both hands and up both arms where they’d struggled to get a line in and vein after vein had collapsed.

A scar on her neck like three points of a triangle from where they’d removed the line.

Two small scabs on either side of her abdomen, the drain sites healing over.

And a cut about four inches long through her belly, cutting her belly button in half. The middle was shiny pink and both ends scabbed over, occasionally bleeding through the dressings.

Her mother stays the latest every day. Reads to her, sees her into bed. And every day as her mother leaves she wants to cry, please don’t go. I’m afraid. The nights were full of terror, like a child without a light.