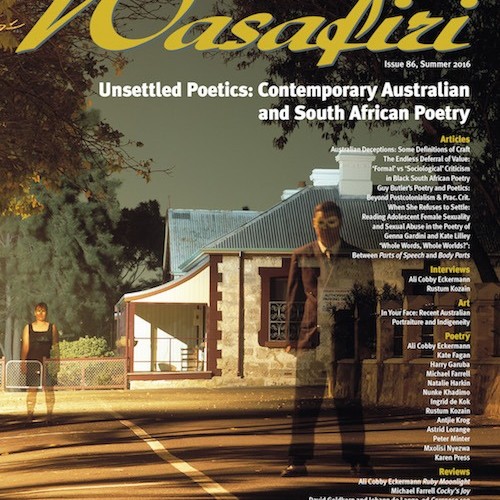 Wasafiri is a major platform for international writing, and this is the first time it has featured either Australian or South African poetry. This special issue includes new work by thirteen Australian and South African poets, including Ali Cobby Eckermann, Kate Fagan, Antjie Krog, Michael Farrell, Natalie Harkin, Rustum Kozain, Ingrid de Kok and Mxolisi Nyezwa, as well as essays, interviews and reviews, bringing together 24 contributors from both countries. Together they explore the way in which poetic craft inhabits and unsettles the process of colonial conquest and its aftermath in their respective countries.

Paul Carter will launch the issue, Ben Etherington, the editor, will give an overview, followed by readings from Kate Fagan, Michael Farrell, Fiona Hile, Gig Ryan, and Ann Vickery.