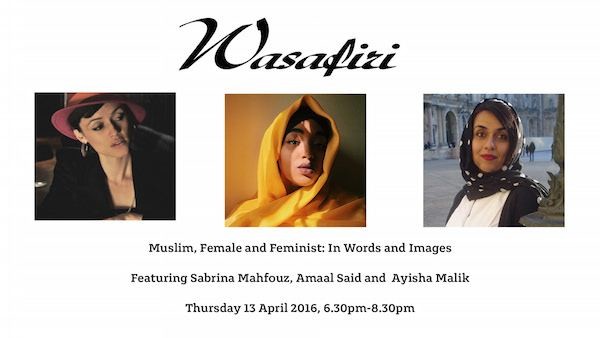 What does it mean to be Young, Muslim and feminist today? Is the West obsessed by the way Muslim women look? Can we look beyond the veil to women’s relationship to faith, faithlessness, fashion and liberation? Join us for readings and a panel discussion on Muslim identities, photography and literature in this event hosted by Wasafiri Magazine and chaired by its deputy editor, Arifa Akbar.

Sabrina Mahfouz is a British Egyptian poet, playwright, librettist and TV screenwriter from London. Her poetry collection is called How You Might Know Me. She has won a Sky Arts Academy Poetry Award and has been an Associate Playwright at the Bush Theatre. Her play, Chef, won a 2014 Fringe First Award and her essay, ‘Wearing Where You’re At: Immigration and UK Fashion’ featured in the award-winning 2016 anthology, The Good Immigrant. She has edited the short stories anthology, The Things I Would Tell You: British Muslim Women Write, published in April 2017, with contributions from leading writers, and will be on sale at this event. Other work includes With a Little Bit of Luck, Clean, Battleface and the love i feel is red.

Amaal Said is a Danish-born Somali photographer and poet based in London. Her photographs have been featured in Vogue, The Guardian and The New Yorker. She is concerned with storytelling and how best she can connect with people to document their stories. She is a member of the Burn After Reading poetry Collective as well as the Octavia Collective, and she is a Barbican Young Poet. She won Wasafiri Magazine’s New Writing Prize for poetry in 2015.

Ayisha Malik holds a BA in English Literature and Sociology, and a First Class MA in Creative Writing. She worked at Penguin Random House before moving to Cornerstones where she was managing editor for five years. Her debut novel, Sofia Khan is Not Obliged, was a WHSmith Fresh Talent pick in 2016. The book has also been optioned for TV. The sequel, The Other Half of Happiness, is out April 2017. Ayisha is the ghost writer for Great British Bake Off winner, Nadiya Hussain’s book,The Secret Lives of the Amir Sisters. She is working on her third novel, as well as Nadiya’s second book.

Free but you must reserve a ticket.

To reserve a place at the event, visit our Eventbrite page.