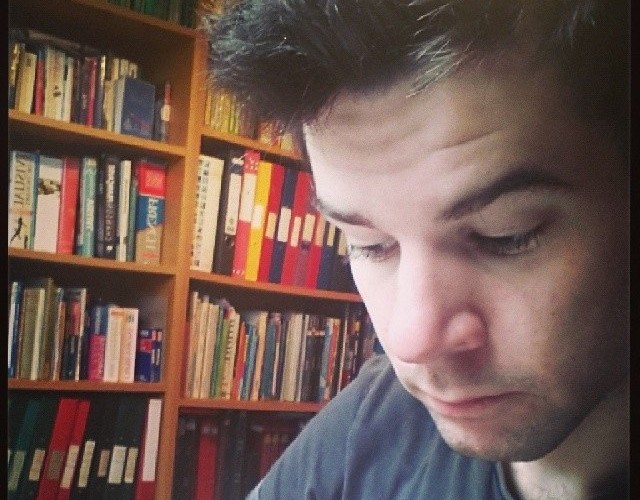 Robin Ganderton has already outlived John Keats and is on course to do the same with Percy Bysshe Shelley. Last year he won the Terry Hetherington Award for Welsh Writers Under Thirty and has just been selected to receive a Literature Wales bursary to work on his novel in progress. You can follow him on Twitter @impropaganda.

Past a certain time, all phone calls are bad. Eleven thirty can be someone who just forgot to check the clock; even half one can be a beery friend screaming through the noise of a bar. But get past three am and a call cannot ever, ever be good.

I’m talking about the dreamsplitter.

My grandmother is in the kitchen, making sandwiches for no one. Corned beef, cheese, ham and chutney; great piles of crusty triangles that will sit in the pantry until they are stale and flirting with mould.

Since my grandfather died, going out with the century, she has lived on her own. Yet since the mini-stroke three years ago, she has cooked and cleaned for thousands. Friends, family, treasured guests. Whenever I visit, she remarks on how quiet I am when I stay overnight, how silently I slip in and out of the house, even when I bring all my friends. I have given up correcting her.

Every day she gets up early and lays the breakfast table for six.

I’m talking about how it’s hard to deal with death when you’ve never dealt with death. My family is small, loose-knit. My dad never knew his granddad, just like his dad never knew his granddad, just like I never knew mine. My nana passed away while we were on holiday, and my parents left me with friends while they raced back up through the Chunnel for the funeral. All told, three out of my four grandparents died before I was born or before I was old enough to understand. And in twenty-first century life, with modern medicine snatching bone after bone from a cowering reaper, death seems further away than ever.

I jerk upright in bed and stare at the phone. The digital clock reads4:09 am.

For the first time in her life, my mother is speaking to the owner of a kebab shop. My grandmother has been waiting at the bus stop outside his premises, her hand wrapped tightly around a little travel case. Much later, when this case is unpacked, it is found to contain nothing but tights, towels, and a few pieces of my grandmother’s wedding china. After the fourth or fifth hour, the shop owner grew concerned enough to go out and talk to her, to ask her if she was okay, why she wasn’t getting on any of the buses. When he found out she was miles from home, he kindly and patiently drew out the number of her closest relative and hurried back inside to call.

The owner’s accent comes thick but clear down the line. ‘She says, madam, that she is going to London to stay with her son.’

‘My brother emigrated to New Zealand seven years ago,’ says my mother, a tinge of bitterness catching at her throat. ‘Can you make sure she doesn’t go anywhere? I’ll be there in twenty minutes.’

The kebab shop owner keeps my grandmother in the fat-fryer warmth of his shop while they wait and sends her home with a bag of chips and a box of chicken nuggets for her tea.

My grandmother puts them in the pantry, in case the guests get hungry.

Our house is five minutes from the only crematorium in town and when someone under the age of thirty, forty, fifty dies the streets around are sardined with cars. Once, after a local Welsh Guard stepped on an IED in Afghanistan, three coachloads of soldiers were bussed up in full combat fatigues and a brace of RAF fighters performed a flyover.

I’m talking about how I’m scared that when my grandmother dies, no one will show up.

Who is there to attend? All her friends, dead. All her siblings, dead. Two children gave her one grandchild. Me. I imagine the church gaping and hollow, devoid of life, full of death, the vicar’s voice getting louder and louder in a desperate attempt to fill the empty space. Then I think of all the other old women, husbands and friends long gone, the last of their set, cleaning empty homes, watching programmes they no longer understand. All the old, lonely ladies past their die-by-date.

My grandmother still lives where she has lived for fifty years. Care homes are over-expensive and understaffed and, without her housework, her little bit of gardening, what would she do? She has no hobbies, no interests. Her life was a by-the-numbers struggle up a steep and winding hill, to raise two children and look after her husband and, now those things have gone, she has nothing.

The phone is still shrieking, and it is still 4:09 am.

With blurry hands I raise it to my ear, fear already gurgling in the pit of my gut. A voice informs me that my grandmother has pushed her emergency buzzer. Through the cirrus of sleep I ask what I should do.

My parents are on a coach tour of West Coast America and I’m housesitting, which is why I’m answering the phone in the first place. No car. Too far to walk. I dial her number. No answer. My mind a glut of horror, I cradle the handset. Stare at the keypad. Swallow. Press three slow numbers.

After half a decade, the guests are finally leaving. My grandmother still sets the table for breakfast each morning, but distractedly, sometimes with just a bowl of sugar and an empty jar of marmalade. She no longer makes sandwiches for no one. She no longer makes any food at all. The gas cooker was disconnected because she kept leaving it on and now social services bring her ready-heated meals in foil boxes for lunch and for dinner. NHS carers visit three times a day, filling a black record book with the large, loopy handwriting of the young and enthusiastic.

Evelyn getting ready for bed when I arrived. Told her it was lunchtime and helped her into her clothes.

Evelyn upstairs, arguing with someone. Checked all rooms. No one in house.

Evelyn arranging tights on the bed, muttering angrily because some different lengths to others. Helped her downstairs and sat with her while she drank a cup of tea.

Each time my mother goes to visit, she reads the book with a blank expression then shuts it slowly and replaces it. She is all cried out.

I’m talking about how the landline has changed; I’m talking about how it’s morphed into an instrument of dread. All the personal, informal calls, all the calls you look forward to getting, nowadays, all those calls come to your mobile. These days, the only time the landline rings, it’s a telemarketer with exciting information about the thousands in PPI repayments you’re owed … or it’s someone official with a tone soaked in the sympathetic politeness only bad news can bring.

After ordering the ambulance, there is nothing to do but wait. What if she’s fallen and shattered her hip? What if she’s suffered a massive cardiac arrest? Should I tell my parents, thousands of miles away across the Atlantic? Ruin the only break they get from all this? Or wait till they come home and give them the news as I help with their bags, watching their suntans fade to white? That choice is no choice. I will have to tell them immediately, and I can already hear my mother’s distraught voice cracking over the long-distance line. With my grandmother’s clear and present deterioration, they know, have known for a while, that it is only a matter of time. Yet already knowing will not make it any easier.

The digital clock reads 4:28. The emergency services lady took my number and told me they would call back as soon as they had any news, but I cannot stand the waiting. Can’t stand it. I snatch up the phone to call a taxi and as I do so it shrills itself into life.

My mouth is so dry I can barely force out a questioning hello.

It’s the same lady, the lady from before. Her voice sympathetic as honey, she informs me that the ambulance team has arrived, that my grandmother seems unharmed, that she is denying ever pressing the alarm buzzer at all.

I’m talking about how it can only ever be temporary.

I’m talking about how if it’s not this phone call, it could be the next.