Maria Cristina Fumagalli is Professor in Literature at the University of Essex and she is currently the recipient of a Leverhulme Major Research Fellowship (2016-2019) to work on a new interdisciplinary monograph entitled Derek Walcott’s Painters which will focus on Walcott’s ongoing engagement with the visual arts. She is the author of On the Edge: Writing the Border between Haiti and the Dominican Republic (Liverpool University Press, 2015), Caribbean Perspectives on Modernity: Returning Medusa's Gaze (University of Virginia Press, 2009), The Flight of the Vernacular: Seamus Heaney, Derek Walcott and the Impress of Dante (Rodopi, 2001) and has published numerous articles and book chapters on different aspects of Caribbean literature and culture. She is also the editor of Agenda: Special Issue on Derek Walcott (2002-2003) and co-editor of The Cross-Dressed Caribbean: Writing, Politics, Sexualities (University of Virginia Press, 2013) and Surveying the American Tropics: A Literary Geography from New York to Rio (Liverpool University Press, 2013). Her research has been supported by the AHRC (2006-2011), by a Leverhulme Research Fellowship (2012- 2013) and by the ESRC (2016). 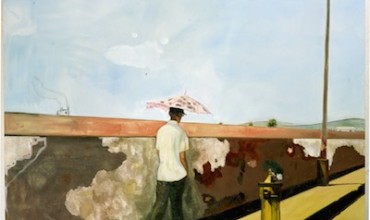 On Walcott and Doig by Maria Cristina Fumagalli

There was an old gardener in my village in Italy, about twenty-five years ago, who after his wife’s death, decided to go around wearing her necklaces and brooches. They had been together for more than sixty years and, as he once whispered to me in his deep, guttural dialect, this was his way to feel her close to his heart and to feel himself again. Someone should write about this, I remember thinking, someone who could pay homage to the deep humanity of this gesture, to the simple world it sprang from and to the authenticity of this love.