At the speed of light, squared by AKaiser 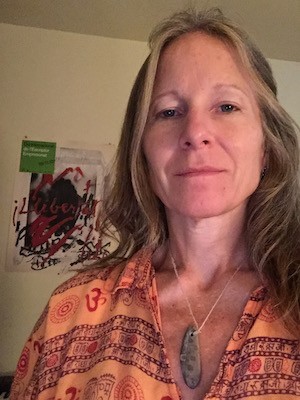 AKaiser’s poems have recently appeared in Amsterdam Quarterly, Temenos Journal and Coldnoon: Travel Poetics. This past spring, she was a resident at JIWAR, Spain. She is a translator, currently working on the writings of Cebrià de Montoliu, the first translator of Walt Whitman’s Leaves of Grass into Catalan.

There are scientists who have done experiments

on a mother’s connection

to her child across boundaries of body and space.

Across the globe, they have measured mothers

feeling – not the joy – but the pain

of her child though separated by far miles and zones

of time. They surmised that they are reality, these

apart, that they can be registered at the speed of light,

squared. I thought of this while we waited for the

acupuncturist, your foot so badly

black and blued from kicking a stone stair with all

your might, not realising the friend had already pulled

the ball away. Her office all soft

We go through the healing we had tried to accelerate

since our last visit. Changes

in pain, swelling become inert – despite the massages

and the Chinese ointment we mixed with good faith,

water then wine. It thought how

immoveable stone that afternoon of extra recess me

working a mere. 5 miles away?

How is it that I did not feel that, if, when she grabbed

your foot and bent it in the direction you had explained

crowned your head through me to this outside world?