Writing Britain Now: The Books of Sheffield and Newcastle 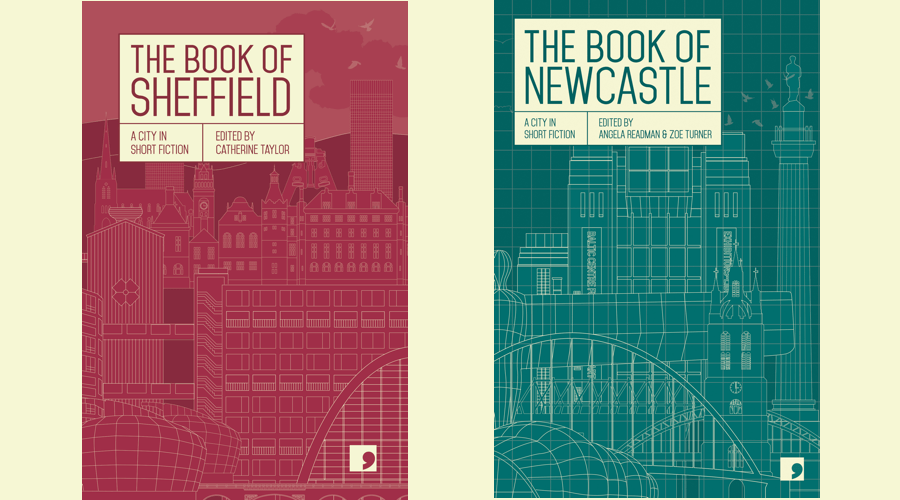 By Wasafiri Editor on December 16, 2019 in Articles

Comma Press’s ‘Reading the City’ series has been traversing the globe since 2006, sourcing a selection of ten authors from specific cities to collate ten short stories that depict the social, historical or political essence of their contemporary city. From The Book of Tbilisi to The Book of Tokyo, and The Book of Dhaka to The Book of Khartoum – and this year alone they’ve covered both Tehran and Cairo – the Manchester-based not-for-profit press has no plans to stop showcasing the literary landscape of Britain’s cities either—with the The Book of Sheffield as their final release of this year, and The Book of Newcastle being their first 2020 publication.

Both The Book of Sheffield and The Book of Newcastle are ‘Writing the North of Britain Now’. They are writing stories of persistence in the face of underinvestment and post-industrial decline, and they are writing stories of the hearts that beat between the widening class divide under Tory austerity. In The Book of Sheffield, the characters grapple with themes as wide-ranging as the city’s erasure of its own Black History, its growing community of refugees and its student radicals, while in The Book of Newcastle, the characters we meet are all in search of something, a new reality, perhaps, in which to rediscover themselves, as might be expected of the people who occupy a city that has undergone such dramatic transition.

At a time when Britain’s most powerful voices still represent the country on all our behalf from their seats in London, while we continue to live such wildly different lives elsewhere, writing Britain now needs to mean writing Britain everywhere, and listening to the words of all of those who too often go unheard.

The Book of Sheffield

Sheffield is a city of contrasts: starkly drawn in the 1970s and 80s, with the affluent western suburbs (praised by the poet John Betjeman as ‘the prettiest’ in the country) and imposing civic buildings belying the grimmer image of a dour steel- and cutlery-making centre and the sprawl of post-war high-rise to the east. Today, Sheffield looks forward to a post-post-industrial future. A new generation of Little Mesters – artists and artisans – have workspaces in former factories; the Park Hill estate is Grade 11 listed and used for everything from the filming of the Dr Who television series to conceptual art installations. Yet it remains a city of divisions and protest – from the early Chartist movement of the 1830s to the 1984-85 miners’ strike and the recent campaign to stop the felling of thousands of its street trees, to the most hotly debated topic of recent years—Brexit. The decision of Sheffield to vote Leave (the only major northern city to do so) in the 2016 referendum – by 52 to 48%, the same margin as the UK overall – laid bare the understandable feelings of decades of disappointment and neglect wielded by governments perceived as uncaring and elitist. Despite all the lottery funding and investment from overseas there are parts of the city that look the same as when I was a child in the 1970s; even some that Orwell would recognise from the late 1930s. People talk of the north/south divide, but that fracture exists in this city, too

Sheffield certainly provides rich pickings for writers, as is clear from the ten wonderfully different stories which make up this book. The cemetery is the evocative backdrop for ‘Born on Sunday, Silent’, Désirée Reynolds’s powerful story of the unmarked grave of an African child dating from the early 1900s, and the city’s shameful collusion in a racist and imperial past.

Margaret Drabble, who was born in Sheffield just before the outbreak of the Second World War, while reflecting on family and loss in ‘The Avenue’ also places the concerns of the current #MeToo movement in an ambiguous moment at the Crucible Theatre in the 1970s. Karl Riordan’s ‘Scrap’, about the exploits of a pair of inept petty thieves, set during the desperation of the 1980s’ recession, is both funny and poignant. Naomi Frisby writes of regret and resilience in ‘The Time is Now’, her story of the break-up of both a band and a love affair. Told retrospectively, it contains Angela Carter-esqe elements of surprise. Ghosts seep into Gregory Norminton’s elegiac tale of ecology, migrancy and longing, ‘How to Love What Dies’, and Geoff Nicholson’s unsettling ‘The Father Figure’, where a man repeatedly encounters the recently dead father about whom he had felt deeply ambivalent in life.

The eve of the millennium and an evening’s clubbing which may or may not be a disaster in the making is the background to Johny Pitts’s winning, effervescent ‘Like a Night Out in Sheffield’; Philip Hensher gives us a wickedly funny and dark account of a sixteen-year-old just coming to terms with his sexuality while involved with a questionable political group in an extract from his forthcoming novel A Small Revolution in Germany; Tim Etchells, in a breath-taking piece of metafiction, examines an alternative dystopian England – Endland – with Sheffield at its centre, in ‘Long Fainting/Try Saving Again’; and Helen Mort brings her poet’s eye to the superb ‘Weaning’ which maps the terrain of the city and its environs onto the landscape of the body of a woman after the birth of her child. Ten stories and ten look-out points from which to gaze down at the ever-changing Steel City in all its manifestations.

The Book of Newcastle

Each city holds a whole library of stories—with some that are yet to be told. When it comes to Newcastle upon Tyne, the structure of the city seems to tell us a story about the people who have lived here throughout time. The stones of the city walls tell us tales of medieval fears of invasion, while the city centre tells more recent, optimistic stories of prosperity. Frequently voted one of the most attractive streets in the country, the architecture of John Dobson Street reflects the city’s former aspirations and status as an industrial powerhouse of engineering, shipbuilding, and export, including coal. In thinking about Newcastle, coal remains the story people are most familiar with. There’s no denying the devastating impact the loss of industry had on the region, or the long-term effects of unemployment, yet we must be cautious our history doesn’t prevent us from seeing the city around us now.

If Newcastle itself could tell only one story it would be one of adaptation. It has responded to the challenges of deindustrialisation and decades of government under-investment by aspiring to become a centre of learning, the arts, and tourism. Looking around the quayside alone, it appears to be thriving. The landscape is vastly different from how it was in previous decades. The sites of former industry have been redeveloped into prestigious hotels, restaurants and luxury apartments. The area has never looked so good. Yet looks can be deceptive. Within an economy largely dependent on retail and the leisure industry, underemployment has become a problem. Under austerity, the demand for food banks has soared within the region – 20 per cent within the last year alone – with zero-hour contracts and benefit delays being cited as the source.

But this isn’t to say the city lacks hope.  Newcastle is stronger than the blows it has been dealt. This is what we wanted to reflect in The Book of Newcastle. It is difficult to imagine now, with recent projects born both in and outside of the area (including Kit De Waal’s Common People anthology, And Other Stories’ Northern Book Prize, Dead Ink’s Test Signal Kickstarter and the Northern Fiction Alliance) striving to acknowledge working-class writers and northern voices, but the idea of writing stories about the north still seemed unusual when this project initially began as Newcastle Stories. Within the context of an industry largely based in London, many writers felt discouraged from writing about where they were from. To write about the north was often to be marginalised, with some agents and publishers advising their clients to lose any accents in their work and write more upwardly mobile characters. Though it was seldom spoken out loud, to write about Newcastle was usually to write about being working class. There has never been a better time to write about where we come from. Not only socially or geographically, but in terms of how those places shape us, and who we are because of them.

Though literature may not be most people’s first thought when considering Newcastle, the city has a proud literary history. Julia Darling and Chrissie Glazebrook’s work felt like an important part of Newcastle’s literary legacy, and we wanted to continue to celebrate it alongside the city’s contemporary writers. At a time when much of the industry seemed reluctant to embrace stories about Newcastle or the north more generally, their writing gave others permission to use their regional voices and acknowledge the city.

There is no more we can ask of any story, but for it to take us on a journey to a whole other place. We hope you enjoy your stay in Newcastle.