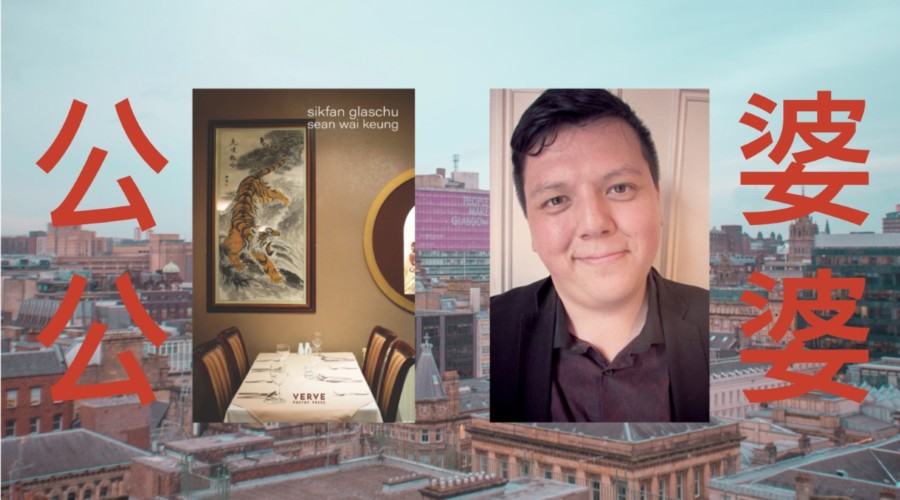 The history of migration in the UK is also a history of food. And the history of British food is also a history of its cities. My maternal grandparents, my 公公 and my 婆婆 as I’ve always called them, migrated to Liverpool in the 1950s. From there, they traveled to different places opening restaurants and takeaways in a wide range of cities and towns throughout the North of England. They, and others of their generation, helped introduce local taste buds to a more globalised idea of food. It may not have been ‘authentic’ in the sense of direct translations of Hong Kong recipes, but it was still through their ability to adapt and cater to locally available ingredients and wallets that they were able to survive and flourish.

By using Glaswegian takeaways and restaurants as the starting point for some of the poems in sikfan glaschu, I hope to highlight this culinary-based migration history, as well as others, while also remaining true to my own experiences and identity.

this place was built by migrants

therefore it is ours

they came from the gàidhealtachd

they came from the ghalltachd

sometimes i wonder what my 公公 would have thought

had he been given the chance to visit

he had lived in other cities built by migrants

he would have liked it

but who can know for sure

when he first arrived in the uk i dont know

the year after i was born

years after he died

this place was built by migrants

and we have been eating here ever since

‘Chinatown’ is named after the first restaurant in Glasgow where I ate Chinese food. I moved here in 2016, and since then I’ve been fascinated by the way this city wears its migratory history on its sleeve. It’s a place that has for centuries been a magnet for those looking for new lives and opportunities, and this is evident in the restaurants here. ‘Chinatown’ tries to encompass a small part of this narrative, as well as my own place within it, by starting with the setting of the Chinatown restaurant and then, with the lines ‘they came from the gàidhealtachd/they came from the ghalltachd’, going all the way back to migration into Glasgow from other parts of Scotland (‘Gàidhealtachd’ being the Scots Gaelic term for the Highlands, and ‘Ghalltachd’ being a term for the Lowlands, or as a more literal translation, ‘place of foreigners’).

the sound of helicopters above becomes overwhelmingly

present in the street as i walk down towards the park

between the bins thinking about food or something else

non-essential but does that still count as a going out

what if the helicopter is filled with officials with telescopes

monitoring how often people go out what if people are

no longer allowed in the communal gardens behind their tenements

what if its some new government thing i havent heard about

something declared during the time it took me from leaving

‘Wing Rush’, named after a local chicken wing takeaway shop, is based on an early experience of the first lockdown in Glasgow, a time characterised by governmental confusion over local restrictions. It also plays on a very real fear, which I share, of the government using lockdowns as an opportunity to extend their powers under the disguise of public health and safety. Like many people of my generation with migration in their recent histories, I have learned that all too often those in power are not my allies.

Beyond those fears, these lockdowns also marked the longest period of time in which I haven’t seen my family, most of whom live a five-hour train journey away, in Yorkshire. In my adult life I’ve never been one to spend a huge amount of time with my relatives, but no longer being able to visit them last year was more stressful than anticipated. During the year my 婆婆 was diagnosed with stomach cancer. My mum had to deal with most of her care needs. I was (and still am) struggling with feelings of guilt over my inability to be there to try to support them. ‘tomb-sweeping day 2020 glaschu’ was written during this time, named after the Ching Ming festival, a day observed by many Sinosphere cultures, reserved for remembrance and paying respect to our ancestors.

i tried to imagine once what it would be like

living over half your life without being fluent

in the local language – how much more intelligent

you would have to become at things such as social

incorrectly – if you failed then the consequences could be

atlas looking up faraway places and think about what

if there would be anyone there who looked like me

meanwhile down the road at the front desk of the spring

bamboo they would sit together at the same time everyday

in a calm silence

but doing so in 客家話

and there would be no need for words

from the circle diagram to the one-line diagram

the front door together before flipping the plastic sign

from the red side reading closed

to the blue one reading open

In the process of editing the poems in sikfan glaschu, my 婆婆 passed away. After travelling down for her socially-distanced funeral, in lieu of a proper Chinese wake, my family all bought fish and chips from her favourite local chippy, and then we ate together in the garden. Afterwards, I took the train back up to the city I now call home.

When I got to my front door, following the traditional Hong Kong Hakka customs that still meant so much to my 婆婆, I tied a red thread around the handle in order to keep the spirits away. The future of living and writing in the UK still scares me. There’s a lot of uncertainty, and some days it feels like the bad news will never end. But I also have faith in my ability to adapt, to carve space out for myself here, just like my ancestors did before me.

Sean Wai Keung is a poetry, performance and food maker based in Glasgow. His work often uses food as a starting point for explorations of identity and migration. He has published work about fried rice, chilli oil and munchy boxes, for organisations including the National Library of Scotland, GENERATORprojects Dundee, SPOONFEED zine and Vittles. His first full length poetry collection, sikfan glaschu, was published by Verve Poetry Press in April 2021, and uses Glaswegian restaurants, takeaways and cafes as a window to wider identity topics.