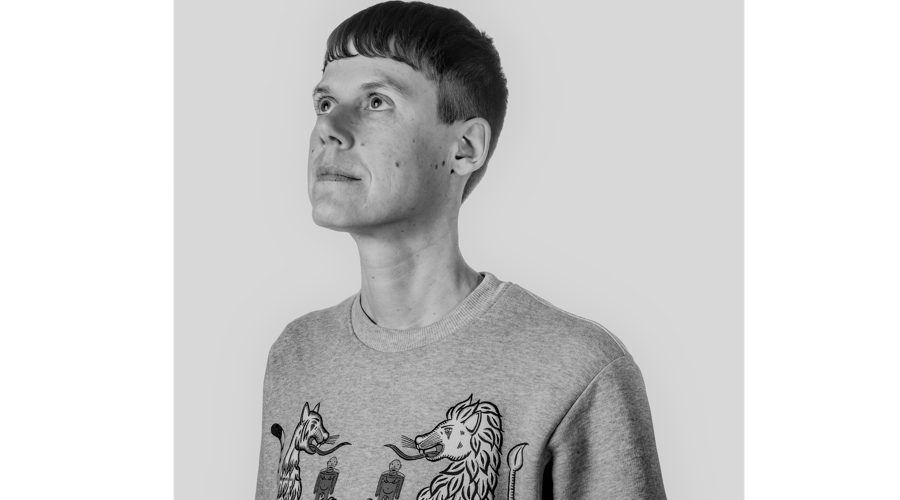 By Wasafiri Editor on February 26, 2020 in Fiction

Isabel Waidner is a writer and critical theorist. Their novel We Are Made Of Diamond Stuff (2019) was shortlisted for the 2019 Goldsmiths Prize and is currently shortlisted for this year’s Republic of Consciousness Prize. Waidner has written for journals including AQNB, The Happy Hypocrite, Frieze, and Tripwire. They are a co-founder of the event series Queers Read This at the Institute of Contemporary Arts, and an academic at Roehampton University, London.

An extract from We Are Made of Diamond Stuff —

‘Rauschenberg and Brexit are Braving the Surf’

We have fighter planes rockets explosions on our sweaters, this is not Top Gun, this is not an haute couture fashion show. This is the Isle of Wight off the south coast of England, the beach outside Ryde. Shae is wearing their military green parka over their sweater, it’s parka weather in June. Black oversize joggers, white Reebok classic trainers. The Isle of Wight is home to the British space rocket industry and Her Majesty’s high security prison complex (HMP Parkhurst). There’s Ryde Arena (the boarded-up ice rink) and Sandown Zoo. Yes, and British beaches. Shae is looking for their parent, apparently. Their mother, their father, it’s all relative. As far as Shae can tell, their parent is not on the beach. They think that their parent is more likely in HMP Parkhurst than on the beach. Unless there’s an Aldi in Ryde? (Aldi alcohol is Shae’s parent’s food, apparently.) (Affordable bubbly—.)

Robert Rauschenberg’s Mud Muse (1968-71) is a 12ft by 9ft glass and aluminium tank with bubbling bentonite clay inside. The tank is equipped with microphones and a tape machine recording the bubbling, which in turn (in play mode) triggers a system of pumps inciting new bentonite (benny) activity. Rauschenberg’s piece is in a museum in London, what’s it got to do with Isle of Wight beach life. The tide is low, the ground is wet, the terrain is launching bentonite missiles, that’s what.

The local MP is delighted with the EU referendum result. The Isle of Wight voted 62% in favour of leaving the European Union. (‘We have done it—voted to Leave—, and that is all we can do.’) Bullet rain from the terrain upwards, is this a natural event or a case of national politics? WHAM! BAM! A projectile hits Shae on the shoulder. We retaliate, FIGHTER PLANES ROCKETS EXPLOSIONS ARE GOING OFF, THEY REALLY ARE GOING OFF NOW, WE ARE NOT WEARING OUR SWEATERS FOR NO REASON. As if connected via a hidden tape machine, benny activity on the ground is increasing proportionally.

Over there, I say. Is it your parent? Stuck in a black and white car tyre, Rauschenberg’s taxidermy merino sheep (Monogram, 1955-59), like us, is dodging bentonite bullets. Shae isn’t sure about this one, they are going to have to take a closer look. On inspection, Monogram (Money) is reminding Shae not of their parent, but the Isle of Wight’s Brexit-done, Brexit-doing MP. The way it’s stuck in its black and white tyre—. But Shae, I say. It’s got rainbow coloured acrylics all over its face. Money is gay (flying the rainbow face). Still, Shae says. Rainbow or not, they aren’t convinced of Money’s pro-European orientation. They think we might be dealing with a representative of the UKIP or English Defence League LGBTQI+ divisions. The rise of the UKIP or English Defence League LGBTQI+ divisions is not a joke, it is very serious. Shae thinks we should leave Money on the beach where we found it on the grounds of its potential links to right wing LGBTQI+ organisations.

Benny missiles are flying, they are airborne like starlings, I’ve hated the intimation of paintballing from the beginning. WHAMBAM! Another hit, echoing Shae’s t-shirt with the pink-mouthed shark, black and white stripy flashes and blood dripping from the hem upwards. WHAMBAM! it says on said t-shirt which Shae isn’t wearing, not under their sweater, and never with their black oversize joggers. The pink-mouthed shark rises from the sea surfing a tidal wave. What if this part of the beach were about to get flooded. (This isn’t an haute couture fashion show and this isn’t a surfer’s paradise.) Already the water is rising, Shae’s Reeboks are drenched. Let’s go, I say. Hang on—. Shae just wants to make sure their parent isn’t over there. Where? There—! The pink-mouthed shark releases a black and white stripy lightning bolt from its eye. The lightning bolt travels across the left-hand side of the t-shirt including the sleeve, creating a zebraesque dreamworld. It’s raining, I complain. But Shae will not be slowed down by the rain, this is England, Shae is British (second gen).

In the 1950s and ’60s, the British space rocket programme saw the Isle of Wight’s Needles Headland transformed into a real-life double-o seven film. British space rockets were assembled in underground workshops, apparently, then launched into the atmosphere from the Needles rocket testing site (like fireworks). I want an astronaut who is not Tim Peake (Mae Jemison, or Helen Sharman). What’s that over there? I ask. (Shae’s parent? No.)

On the Esplanade, a demonstration is building momentum. Local party activists are flying the rainbow flag. Some are carrying placards: ‘Some gays vote UKIP. Get over it.’ ‘Don’t let bigots enter our country.’ ‘Britain First!’ The party activists are young working-class gays, twenty-somethings. They look just like Justin Bieber, only paler (white British). They own Staffies named Judo, or Karate. They are good gays, community-orientated gays. Like me, they advocate PrEP. Unlike me, they blame Muslims for anti-gay sentiment on the island. They think Muslim culture is inherently homophobic hence incompatible with Western ideas. They’re not racist (they say), they’re progressive. They’re caught up in the same eternal shitshow (‘discourse’) as the rest of us, positioning the ‘liberal’ West against the ‘primitive’ East (what Edward Said said, and, later, Jasbir Puar). This view originates in the upper spheres of British imperial society (NOT the white working classes), and it is currently peddled by the ultra-posh Tory government with renewed vigour.

Shae doesn’t smile, I don’t smile, we are migrants from North West London. We roll out the tanks on our sweaters and make straight for the Esplanade.

What if the earth were riddled with microphones. What if a tape machine were recording the tracks of our tanks, what if (on playback) a hole opened up under the Esplanade and swallowed the demonstration. What if a pink-mouthed shark rode in on a tidal wave, what if a b&w lightning bolt from its eye turned the scene into a zebraesque fantasy. This isn’t an art installation, this isn’t just a motif on a t-shirt. This is the Isle of Wight off the south coast of England, this is what we are faced with. 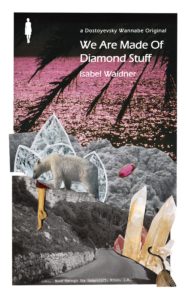 ‘We Are Made of Diamond Stuff’ by Isabel Waidner is published by Dostoyevsky Wannabe.

Wasafiri: Tell us about your novel.

Isabel Waidner: We Are Made Of Diamond Stuff is an innovative and critically ‘British’ novel, set on the Isle of Wight off the south coast of England. It collides literary aesthetics with contemporary working-class cultures and attitudes (B.S. Johnson and Reebok classics), works with themes of empire, embodiment and resistance, and interrogates autobiographical material especially the queer migrant experience. The novel’s protagonists, Shae and someone who looks like Eleven from the Netflix series Stranger Things but who’s actually 36, work in a run down hotel on the island. They’re up against it, but they survive, not just physically but spiritually as well.

This series is about new ways of representing Britain, how do you tackle that in the novel?

One of the strategies I adopted to re-imagine the novel form is to work across what traditionally counted as high and low cultural registers. There are various references to canonical avant-garde literature, for example I lifted one of my villains, House Mother Normal, straight from British avant-garde novelist BS Johnson’s eponymous novel from 1971. Simultaneously, the novel works with pop cultural references including Stranger Things and the indie film I, Tonya, about the North American ice skater Tonya Harding (a figure I have used to dispel the myth of meritocracy in a classed society). Also, We Are Made Of Diamond Stuff works across traditional distinctions between literary writing and critical theory, using for example Jasbir Puar’s notion of homonationalism to think through some pressing, current issues including anti-migrant sentiments in supposedly liberal LGBTQI communities; or I used British cultural theorist Paul Willis’s work on counter cultures in British secondary schools in the 1970s to think about class resistance today.

Why Isle of Wight?

The Isle of Wight lends itself as a setting to explore the discrepancies between a kind of English Riviera mythology that many of us have grown up with, and the actual reality of a dwindling tourist industry, chronic under-investment by consecutive Tory governments and class inequity. On top of this, We Are Made of Diamond Stuff interrogates how histories of empire and militarisation are embedded, not just in the British collective psyche, but our contemporary reality including the Isle of Wight’s actual infrastructure and landscape. With its proximity to Portsmouth harbour (home of the English navy since the Middle Ages), its role as a key site of defense in the Second World War, and the physical ruins of the actual British Space Rocket Programme left on some cliff, imperial violence is basically one with scenes of natural beauty on the Isle of Wight. Imperial violence is literally naturalised on the Isle of Wight, and the novel stages some of the tensions that come with this.

Given that most of the books that directly influenced Diamond Stuff are referenced in the novel itself, I thought I recommend some books by writers who shape the contemporary context I work within:

Finally I’m excited by Alison Rumfitt, WHO WILL SURVIVE AND WHAT WILL BE LEFT OF THEM (The 87 Press, forthcoming)