‘Writers grow out of communities’: Malachi McIntosh on Wasafiri’s Craft 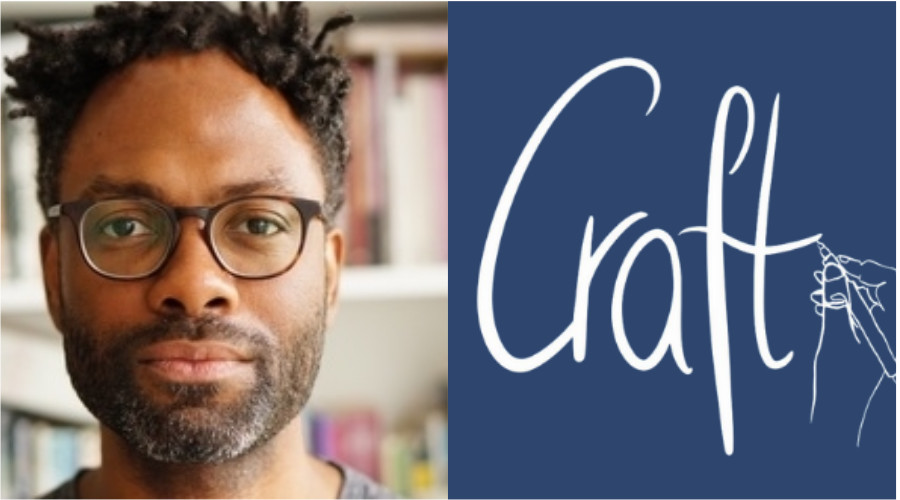 By Wasafiri Editor on October 29, 2021 in Interviews

Over the last year, Wasafiri’s Publishing Director, Malachi McIntosh (with support by members of the Wasafiri team) has been hard at work designing and recording Craft – a literary podcast featuring a range of international writers, including Daniel Mella, Chen Chen, Bernardine Evaristo, and Raymond Antrobus. Craft removes the constraints of the interview form, allowing guests to explore their work and processes on their own terms, and creating an immersive and intimate experience for the listener. The first episode will be available on streaming platforms on November 3.

Here, Malachi articulates the motivation for starting Craft, what he’s learned from the process, and why it’s so important in today’s contemporary literary culture for writers of colour to be afforded the ability to shape the conversations around them and their work.

What drove you to start a podcast? What made it feel necessary?

It’s an idea that’s been bubbling in my head since 2018 when I discovered the podcast Song Exploder, which Craft is unapologetically modelled on. Song Exploder, for those who don’t know it, interviews one recording artist about one song and how it came together, and is edited in such a way that you don’t hear the interviewer’s voice, only the voice of the artist. It’s a really captivating format, and is an excellent way to get insight into how song recording works and how your favourite (or least favourite) musicians work. After listening to a few episodes, I thought ‘there should be something like this for literature’. I brought the idea with me to Wasafiri in 2019, pitched it to the team, and they thought it could work well. Then we started to seek funding.

On why it’s necessary: It’s been said again and again, and demonstrated again and again (not least by Yaa Gyasi in a wide-ranging piece in the Guardian) that writers of colour rarely have the chance to talk about the how of their works, which are most often analysed as autobiography or educational manuals. I wanted to provide space for folks to talk, at length, about the many decisions that go into creating and refining their work outside of the often anthropological lenses through which their writing is read. Craft isn’t just about platforming writers of colour – it’s about showcasing everyone whose work we’re excited about – but, like Wasafiri itself, it will provide a space where those marginalised in the literary field are centred.

What kind of insight do you think a conversation can provide, versus a more orthodox interview format?

I want to preface this by saying there are some excellent radio shows and podcasts that use a traditional interview format, and I find hearing a skilled interviewer at work pretty thrilling. That said, sometimes interviews can feel more about the interviewer than the interviewee and often I find myself just wanting to hear a given writer just … have space to explore and expand upon their ideas. From the first cut of the first episode, which we’re editing now for release on 3 November, I think the format just feels much more intimate. Also, by looking at just one work, always chosen by the author, I think there’s less pressure than the standard interview, which tends to focus on the most recent book released. That’s offered, so far, a space for distance and reflection, and less of a sense that it’s about driving interest in the newest thing.

How did you go about choosing guests, and deciding upon a roster?

Like everything at Wasafiri it’s been extremely collaborative. Our former Digital Editor, now Associate Editor, Sana Goyal, had a laundry list of people she felt we should approach and was instrumental in giving the thing a shape. The rest of the team, over the last twelve months, pitched in ideas. It’s only a pilot season so we’re running just nine episodes, and were keen to feature at least two writers from all the genres we run in Wasafiri: poetry, fiction, life writing, and criticism. We were also keen to have one UK-based writer and one writer based elsewhere for each genre, with a special single episode with a translator. So that kind of narrowed and narrowed who we could go for. And then I just pitched to people who I thought it would be interesting to listen to for twenty minutes to a half-hour from the list. Some people said no, a couple people I’m still refreshing my inbox to hear back from. The ones we have lined up so far I know will be excellent.

What appealed to you about the work and the craft of the writers you chose to talk to?

Everyone scheduled so far has a very singular style – a sort of fingerprint – and it was, and is, exciting to learn about how that works. I think ultimately, as someone who writes with varying success across genres myself, I’m just very keen to see how people do it. The most enjoyable conversations I have with writers are when they pull the curtain back on what they’re up to – what they’re working on, what’s working and not working with it, whatever bizarre new rituals they’ve invented to break blocks. I’m just super keen to get insight into what’s happened behind the scenes with some writers we really admire.

What differentiates Wasafiri’s approach to the literary podcast genre? What makes Craft unique?

It really is the single writer, a work they want to talk about, in a thirty minute format. I don’t know of anyone else doing that. Honestly, I don’t know if it will work and hold people’s attention, but I’m hopeful for it. I’m trying to ask all the questions people ask in the often-truncated Q&A sessions at author readings. Also – we’re getting the writers to read out their favourite sections of their pieces and comment on why they still feel they work. I guess … so far as it’s possible, we’re seeking to provide an in-depth perspective from a writer on their own writing. I think you get that sometimes on the topic of someone’s writing, but not so much on the writing process itself.

How has recording Craft led you to think about the act of writing differently?

So far (and we’ve really just started) it’s again made clear to me how collaborative writing often is. The image we have of the solitary genius in a garret, absorbing and then reframing the world, is widely inaccurate, although it still persists, including on some university English Literature courses. Writers grow out of communities – increasingly transnational communities – of support and influence. Editors have a big role to play … But again, things have just started. If asked again in a few months, after a few episodes, I might have a very different response.

Malachi McIntosh is Editor and Publishing director of Wasafiri. He previously co-led the Runnymede Trust’s award-winning Our Migration Story project and spent four years as a lecturer in postcolonial literature at the University of Cambridge. He is the author of Emigration and Caribbean Literature (2015) and the editor of Beyond Calypso: Re-Reading Samuel Selvon (2016). His fiction and non-fiction have been published widely, including in the Caribbean Review of Books, Flash: The International Short-Short Story Magazine, The Guardian, The Journal of Romance Studies, Research in African Literatures, andThe Cambridge Companion to British Black and Asian Literature.