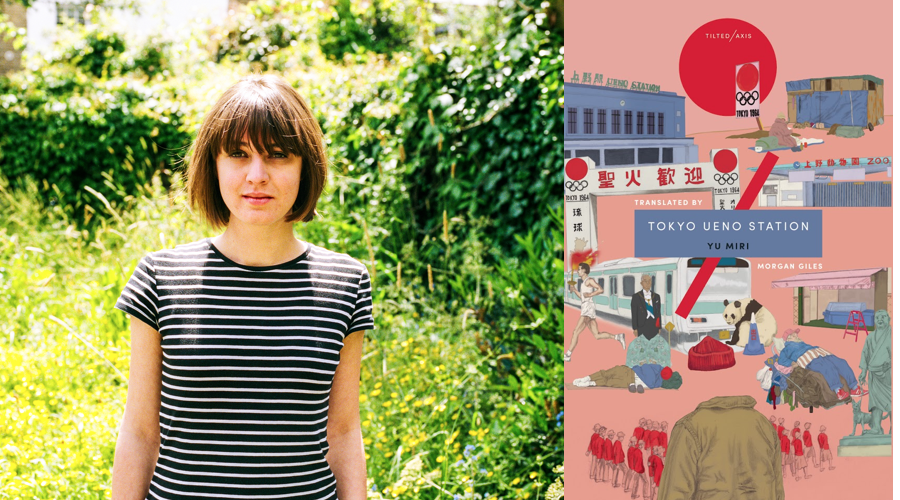 ‘I don’t believe any word is untranslatable, just that we haven’t been imaginative enough.’

Ever wondered which book your favourite translator would secretly love to translate? Or which book in translation they love that nobody’s heard of? Wasafiri Wonders is a series that asks these questions for you.

Born in the foothills of the Appalachian Mountains in Kentucky, Morgan Giles is a literary translator based in Tokyo. She graduated from Indiana University with a BA in Japanese Language and Linguistics in 2009 before moving to London. Her translation of the Naocola Yamazaki short story ‘Dad I Love You’ appeared in The Book of Tokyo (Comma Press). She won the TA First Translation Prize for her translation of Tokyo Ueno Station by Yu Miri.

Before I start, I read over the previous day’s work to get myself in the right frame of mind, and to remind me why I want to translate this text in the first place. Something we don’t talk about enough, with all the talk about how translation is a higher calling or whatever, is that it’s also work, it’s a job, one you can get bogged down in. Even if you aren’t trying to do it in the middle of a pandemic. But I am, and doing any work right now feels like trying to swim in molasses.

So after I read over the text, I try to take time to remind myself what I’m doing this for. And then, I’m not religious but I say something close to a prayer. Let me always remember my purpose. Let me do what I can today, no more, no less.

No! The last thing translation needs is more metaphors.

One of my professors during undergrad told me to be a good translator, you don’t need to know everything or have higher degrees – you need to live a full life and be in empathy with others. Obviously neither of those are small things. They’re everything. The day she said that was the day I understood that there is no such thing as an exact or literal translation, that every translation is the complex result of a text being filtered through an individual’s own experiences and ideas, and that that is more than ‘unavoidable’ or ‘OK’, it is how it must be because translation is a human act. So the work of a good translator is to be open to it all.

I translated a poem written by a woman who had killed herself so that it could be read at her funeral.

There are lots! I’m so interested in observing how my colleagues do what they do, so I find it absorbing to sit down with their translation of a book I know well and ‘watch’ them work. When I was starting out I did this with translations by Michael Emmerich, particularly Sayonara Gangsters by Gen’ichiro Takahashi and Manazuru by Hiromi Kawakami. Now I mainly look at translations from my ‘generation’ of translators, so most recently I’ve sat down with work by Polly Barton (Where the Wild Ladies Are by Aoko Matsuda) and David Boyd (The Factory by Hiroko Oyamada). The beauty of their solutions fills me with awe over what a mysterious and personal thing translation is.

I’m more interested, though, in reading translations of the same text. I’m endlessly fascinated by different translations of The Tale of Genji, the different aspects of the text and characters that each translator manages to bring out – my favorite is Royall Tyler’s translation, but the beauty of Arthur Waley’s is unsurpassed. (Side note: Helen McCullough translated excerpts of Genji but I’m still astonished that Genji, possibly the world’s most famous example of a woman writing exclusively for other women, hasn’t yet been translated in full in English by a woman.)

If you get me started I’ll never stop.

Fumiko Hayashi’s Diary of a Vagabond (‘Hourouki’) should be retranslated and published for a general audience, not an academic one. She’s the Japanese Jean Rhys, or maybe Colette’s Claudine if she were slumming it, down and out in the turbulence of 1920s Tokyo, bouncing from job to job and man to man, living on literature and little else beyond her sarcasm, impetuosity, bravery, and the force of her despair; this book has given me more succor than any other. (Please let me translate it.)

I don’t believe any word is untranslatable, just that we haven’t been imaginative enough.

Translation is an act of service to humanity through language. I don’t just mean literature but everything – safety manuals, assembly instructions, patent applications – all of it is created and translated for a reason: to keep people safe, to make our lives easier, to share knowledge. Literature is only a small part of translation and its purpose, to me, is to boost voices and perspectives that wouldn’t otherwise be listened to by the dominant culture.

I like what Wei Ting recently wrote. She said, ‘Translation is an act of selection, a personal choice as well as a subjective judgment that something is more worthy of becoming known by one’s home audience than everyone else.’ A translation, especially into English, can be a means for the powerful to understand the powerless. It can also be a means for one branch of a diaspora to have contact with its roots or its other branches. It can be so many things! But whatever it is, whoever it’s for, translation is a choice to connect.

Tokyo Ueno Station is such a quiet work – if it were music, I think it’d be something very minimalist with a high level of repetition. Like Erik Satie’s ‘Vexations’, maybe – a ‘short’ piece intended to be played 840 times in a row. When Miri and I sign copies of the novel together, she writes what I translate as: ‘Time does not pass, things do not end.’ What we glimpse of the narrator’s pain in Tokyo Ueno Station is only a snapshot; it will repeat for eternity.

Tokyo Ueno Station by Yu Miri – translated by Morgan Giles and published by Tilted Axis Press – was reviewed in Wasafiri 102, ‘Japan Literatures of Remembering’, which you can buy in our online shop.