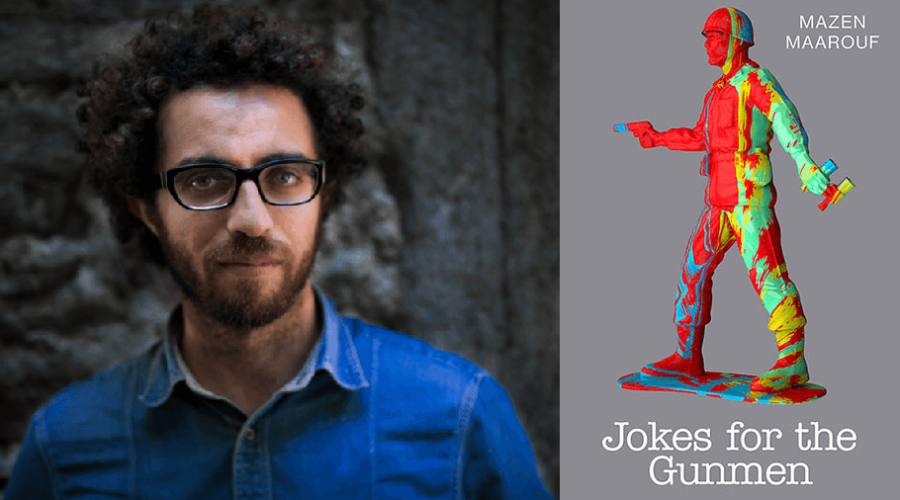 ‘Light cast on me should make others understand it’s better to not think of sharing the table with me.’

Mazen Maarouf is a Palestinian-Icelandic poet, writer, translator and journalist. His collection of short stories Jokes for the Gunmen won the 2016 Al-Multaqa Prize and in 2019 it was longlisted for the Man Booker International Prize with translator Jonathan Wright.

It’s like a jellyfish with one half turned into salt, trying to eat the other half which is fiercely resisting.

I usually work in a café, in the early hours of the morning when people merely show any sign of life. First of all, my shoes should be comfortable. But also, furniture around me must be vintage, partly damaged; wall paint not too white, better if scratched or peeled. No smell of food, incense or perfumes. Light cast on me should make others understand it’s better to not think of sharing the table with me. If all of this doesn’t work, I go to the toilet to pee even if I don’t need to. Peeing is a restart, sort of giving myself a second chance.

At the moment, turning my past memories that are dull and flat into something more of the grotesque and surreal, in a way that makes me believe I too had an interesting childhood.

It’s about a kid trying to earn the love of his father.

‘If the dog bit you, don’t bite him back instantly.’

6. What is your favourite book published in the past year and why?

Sabrina by Nick Drnaso. It’s a masterpiece graphic literary work that illustrates our modern times through a simple story. Though the book revolves around three characters (Sabrina, her boyfriend of Sabrina, and his best friend) it tells, through the loss of Sabrina, about the feelings and states that constitute many of us these days (frustration, fear, bewilderment, loss, outrage, emptiness, manipulation), and how our paranoia becomes greater as the world around us, seemingly getting larger, becomes in fact more abstract and ambiguous.

Lord of the Flies by William Golding.

8. What is a book you love that no one else has heard of?

An anthology of Espano-American short stories in the 20th century. It was published in Arabic and translated from Spanish by Saleh Almani and most of the stories are written in the early period of twentieth century. A treasure of imagination. The book’s title is Hispanic Short Story in the 20th Century.

9. If your newest work were a music album, what would it be?

The Idler Wheel by Fiona Apple.

Ryszard Kapuściński, if he was still alive, and Svetlana Alexievich.