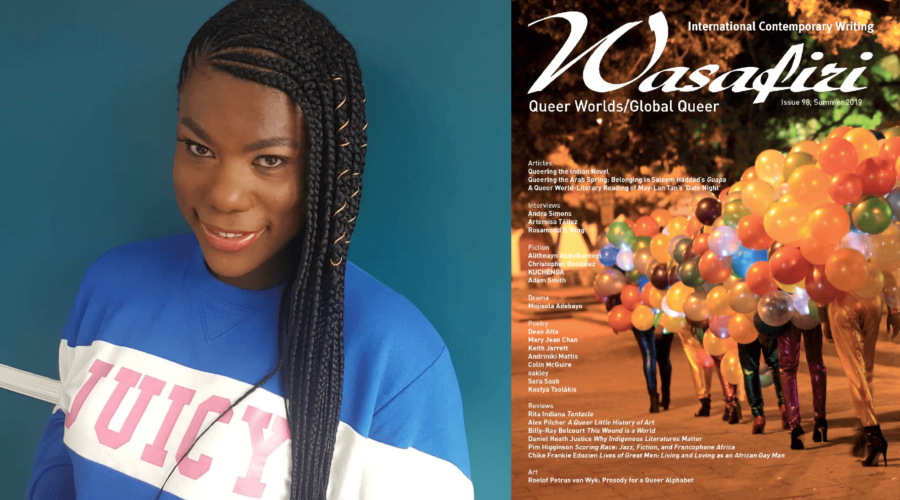 By Wasafiri Wonders on June 5, 2019 in Articles

‘First drafts are a pie where all the components have been cooked most of the way through, but you’ve gotta put it in the oven for it to become worthy of your guests.’

KUCHENGA is a writer, an agitator and avid consumer of all culture high and low. She is a black transsexual feminist whose work has been published in online magazines including Vogue, Harper’s Bazaar, gal-dem, Dazed, i-D and Broadly. Her short story ‘Saved’ is published in Wasafiri Special Issue 98: Queer Worlds/Global Queer.

First drafts are a pie where all the components have been cooked most of the way through, but you’ve gotta put it in the oven for it to become worthy of your guests.

I’m usually a morning writer. To roll over and let the first thing I do be picking up my pen is the best spiritual start to the day. If I get a decent strong coffee in me then I can power through to lunch with a light breakfast once I’ve gotten something significant down pat.

I can’t get back into writing if I allow social media into my mind. Scrolling makes my muses run away. They hate my phone. HATE IT! If I have f’d up my sleep schedule and wake up from a nap at 6pm, 9pm, midnight; then I can write something super spontaneous and random then. But generally it’s mornings. Regardless, it just feels like I am writing in my sleep and I have to channel it immediately onto a page or screen or it’s gone.

I have love affairs with all sorts of pens. I’m polyamorous. Uniball eye pen is my naughty toy boy. He makes my writing nice and wet. But I always come back to my yellow biros. We’ve built up many a notebook together. He’s a solid good guy. I have one night stands with other pens if I’m travelling. Not very fulfilling ones if I’m honest.

I listen to film soundtrack playlists on Spotify when I’m writing. Strictly instrumental, classical stuff. Watching films after I’ve absorbed the tones of the soundtrack is quite trippy because the scenes I’ve associated with the music aren’t always what I am watching.

Being a black transsexual woman means editors are always getting in touch to get me to respond to something gender or race related in the news: ‘We just really felt it would only be right for a trans woman of colour to write about…’

It used to piss me off. I always wanted to be seen as ‘a writer’ first and foremost. But as time has gone on and many have told me what something they’ve read has meant to them, and learning more about writing as a form of activism, I’ve become less bristly about it. I have a political responsibility to reflect the times we’re living in and my experiential knowledge of identities in my subject position means I have particularised perspectives that others cannot grasp as easily.

Nevertheless, when I get a chance to go to a writing group I love to write from different bodies. I’ve not published any of those experiments yet but… I think I would. I created a white Russian female character I fell in love with a couple years ago. That was so fun!

My first novel. A coming of age tale of a black trans girl; the Bildungsroman I needed growing up, I guess. Sex and drugs with builders and politicians. Reckoning with dysfunction and death. A heady mix of recovery and ambition. Oh, and an interesting historical connection to Horatio Nelson. It’s quite a fizzy story.

‘Just rip the lid off!’ I had a sexual relationship with a creative writing tutor who told me to just start enjoying myself. I felt the weight of not feeling like I would ever become a literary great. I couldn’t get anything sincere down whilst I had that pressure on me. I tell my internal critics to F off several times a day. They always come back because they’ve not got that much else to do.

The Leavers by Lisa Ko. I can go back to the world she gave me at any time. She just made my heart hurt. I felt truly ‘handled’ by her. She was so in charge of time and the details she gave a place were so easy for me to fill up with my own visions. I think I might be in love with the protagonist a bit, actually. He’s complex and sweet and filled with longing. I don’t want to fix him at all. I like how messy his mind is and I can sit with his pain quite comfortably.

I’ve actually not read ‘a classic’ in a long while. Being part of ‘Rewriting the Canon’, a gal-dem reading group run by Sharmaine Lovegrove, has compelled me to rethink what actually makes a book ‘a classic’. As black women readers we have our own literary cannon. My favourite jumper has their first names on it in a list:

So, currently, all my classics are by 20th century African-American women writers. In the future, I think I will be delving into more African classics from the continent that aren’t all based in Nigeria.

I read Gone With The Wind when I was seventeen. There’s so much about it that is just bloody atrocious. But, it is still a classic isn’t it? And I remember enjoying reading it immensely. I’m not sure if I would now.

In answering this question and musing on why I read so contemporaneously I think it’s because I read with a sense of urgency. I don’t make time for the classics because I’m trying to understand our world right now. Social media and Netflix have killed my concentration too. I don’t have the patience I used to have. I want big punches and emotional explosions. The poetry of the past that needs you to slow your mind down takes a lot of effort. So, I’m depending on documentaries and audio books for historical morsels I can digest really easily because the narrative voice is so simple. Why read War and Peace when I can get a YouTube video to give me the main thrust of what happened back then in a 10 minute video with some cartoons and graphics?

Good God, I feel awful realising this. I’m going to go to the library right now and give my brain a spanking. I promise I will be able to give you a more satisfying answer in a few months’ time! Tolstoy – please forgive me!

I read this cover to cover at university when many anthologies revealed to me that so many voices described to me as niche and narrow were anything but that. I knew nothing of the chicano movement and colourism in Latin America and the enduring impact of genocide. This book taught me so much about how you could live in the world as a thinking woman. I think, beforehand, I assumed that grappling with one’s intellectual ambitions meant you had to withdraw from the world. Who has time to contemplate one’s relationship with one’s mother, food and violence when there was so much philosophical thought to grapple with? I didn’t know you could be warm-hearted and intelligent and talk about your pain and the inherited trauma of being colonised. This book did that. It opened me all the way up. One day I’d love to swap the Atlantic for the Pacific and head off into other worlds with great women friends around me. I think this book planted that seed.

Soulful trip-hop I guess. A Beyoncé and Morcheeba collaboration. Summery and sun filled with a gospelly undercurrent.

If we are truly serious about saving humanity and living sustainably, there is only one. Woman on the Edge of Time by Marge Piercy. She lays out a future world that makes the most sense I have read. It feels really do-able. Particularly with regard to gender and the environment. It’s the only world I have read about where my life wouldn’t be consumed with defending myself all the time. In fact, it’s about giving us all the time we deserve to fully fulfil ourselves without pushing perpetual growth as the ultimate aim. In that book she makes the earth healthy again. I think that’s why I have so much hope. I’ve seen the other side and it’s beautiful. My sister gifted it to me. As a result, it reminded me of how pure our bond is as sisters. She gifted me with a whole new bounteous world. Quite priceless.