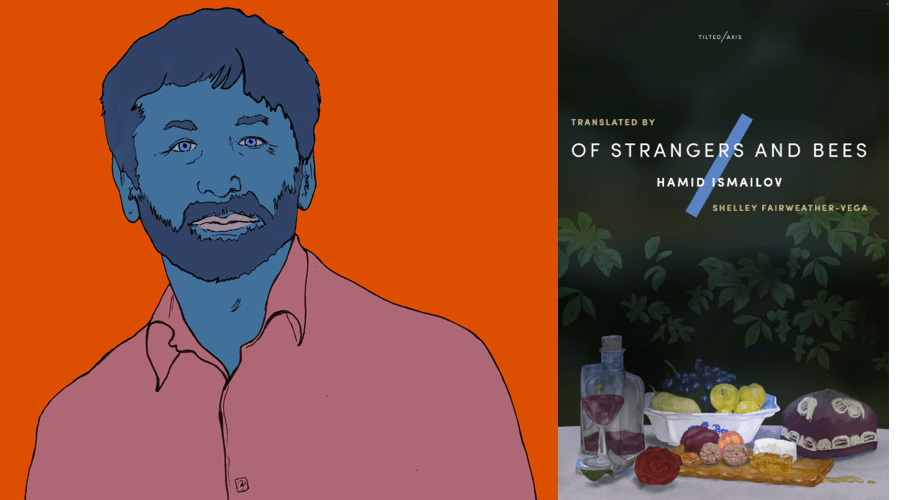 By Wasafiri Wonders on October 18, 2019 in Articles

‘The first draft is handwritten with a fountain-pen on A4 grid paper, then it’s typed and edited at the same time… When the typed draft is ready I print it out onto long sheets (2 m) and hang the whole novel on a wall to see and amend the overall composition’

Born in 1954 in Tokmok, Kyrgyzstan, Hamid Ismailov is an Uzbek journalist and writer who was forced to flee Uzbekistan in 1992 due to what the state dubbed ‘unacceptable democratic tendencies’. He came to the United Kingdom, where he took a job with the BBC World Service, where he worked for 25 years. Several of his Russian-original novels have been published in English translation, including The Railway, The Dead Lake, which was long-listed for the 2015 Independent Foreign Fiction Prize, and The Underground. The Devils’ Dance is the first of his Uzbek language novels to appear in English, and the translation by Donald Rayfield and John Farndon won the 2019 EBRD Literature Prize. His second book published by Tilted Axis Press is Of Strangers and Bees, about an Uzbek writer in exile who traces the fate of the medieval polymath Avicenna. His works are banned in Uzbekistan.

The same unreadable scribbles, but with one overarching rule: they shouldn’t remind me in any sense (tone, structure, plot, characters, etc.) of anything I have written before, otherwise it ends up in a bin.

The first draft is handwritten with a fountain-pen on A4 grid paper, then it’s typed and edited at the same time. Now I use dictation tools to type, so it helps me to choose the right tone and gives me an extra editing opportunity (while reading what’s been dictated). When the typed draft is ready I print it out onto long sheets (2 m) and hang the whole novel on a wall to see and amend the overall composition.

I don’t restrict myself, either in regards to the themes nor characters (see my books), but somehow they turn out to be about human beings as storytellers. For me, the main function of a human being is to tell their story either in words or through their own life decisions, work, feelings, etc.

Here I have to distinguish the newest translated/published work, and the newest written one.

As for my newest translated and published book, it’s called Of Strangers and Bees: A Hayy Ibn Yaqzan Tale. Here’s what my publisher, Tilted Axis Press, is saying about this book:

‘In the latest thrilling multi-stranded epic from the award-winning author of The Devils’ Dance, an Uzbek writer in exile traces the fate of the medieval polymath Avicenna, who shaped Islamic thought and science for centuries.

Waking from a portentous dream, Uzbek writer Sheikhov is convinced that the medieval polymath Avicenna lives on, condemned to roam the world. The novel follows Avicenna in various incarnations across the ages from Ottoman Turkey to medieval Germany and Renaissance Italy. Sheikhov plies the same route, though his troubles are distinctly modern as he endures the petty humiliations of exile.

Following the award-winning The Devils’ Dance, Hamid Ismailov has crafted another masterpiece, combining traditional oral storytelling with contemporary global fiction to create a modern Sufi parable about the search for truth and wisdom.’

As for my most recently written book, it’s called Amber, or Romance with Radio. It’s my English novel, which describes the last day in the life of an old and lonely lady, whose only anchor in this life was and is Radio 4, which as the Voice of the novel tells us, ‘was her effort and her calmness, her pet and her duty, her… quest and her fortune- teller… her fun… her resolve… her… mindfulness… loneliness… and.. present… and… and… death…’

It was not a piece of advice, but a tip, which I learned from the Uzbek writer Murad Muhammad Dost: to hang the last draft onto the wall and see the work in its entirety, so that I could balance the parts respectively.

Finally, two great books of two great Uzbek writers killed on the same day by the Stalinian NKVD in 1938 are out in the US: Days Gone By by Abdulla Qodiriy (translated by Mark Reese) and Night and Day by Abdulhamid Chulpon (translated by Christopher Fort). Both of these great writers are main characters of my novel The Devils’ Dance and therefore I’m twice happy that now people will be able to read them in English and even better understand the horrible tragedy we lived through as a nation, by losing these great talents at their so young age.

I’m at the age of re-reading classics, yet I read for the first time Confessions of St Augustine, and re-read the same of Jean-Jacques Rousseau and Protopope Avvakum.  Not because I’m preparing myself to confess, but just to re-check the looking perspectives of a certain age. What a read, I should confess!

I have mentioned this Uzbek book in several of my interviews, softly guiding translators of Uzbek literature to pay attention to it, but to no avail yet. I’m never tired of reading Kalvak Mahzum by Abdulla Qodiriy – the main character of my novel The Devils’ Dance. It’s a wonderful book. English spectators may be familiar with it via White, White, Black Stork, a play performed at the Tashkent-based Ilkhom theatre. Unfortunately, my late friend Mark Weil had taken a particular angle towards it; he over-romanticized it, when in fact, it is a wonderful comedy about a mullah who tries to adapt to the new time of the Bolsheviks. It is a hilarious book.

Once again, if I talk about the newest translated and published work Of Strangers and Bees then I can compare it maybe with Carl Orff’s ‘Carmina Burana’. If I talk about the newest written book Amber, then I can’t find an equivalent for it, but I can imagine one:  it’s something like Anoushka Shankar playing with Linkin Park while Drake is continuously rapping over it.

I’m not sure that it’ll change the leaders at all. Once upon a time two parents brought a child to the great oriental polymath Avicenna and asked his advice on how to bring him up correctly. Avicenna asked them: ‘How old is the child?’ ‘Three months’ the parents answered. ‘So you are already late for three months’ Avicenna answered. But ‘better late than never’ – I’d suggest Dostoevsky’s Demons. Maybe they could see themselves in those characters and ponder a bit.

Yet I have one particular book for one particular POTUS. For many years I’ve thought of sending my book The Underground to Barack Obama. It’s about a boy born in Moscow during the Olympic games of 1980, called Mbobo. Mbobo promised to become a new Pushkin of Russian literature, but tragically died at the age of 12 along with the Soviet Union. Readers have suggested to me that there seems to be space for us to make a juxtaposition between these two lives – the fictional of Mbobo and the real of Obama. It therefore seems to me that maybe this book could give some food for thought amongst some of the unexplained things in our modern life.

Hamid Ismailov is a contributor to Wasafiri 100. Read his story, ‘Michael, Whose Name was Sari’ (translated by Robin Munby), here. Buy a copy of Wasafiri 100 – our 35th anniversary issue – here.