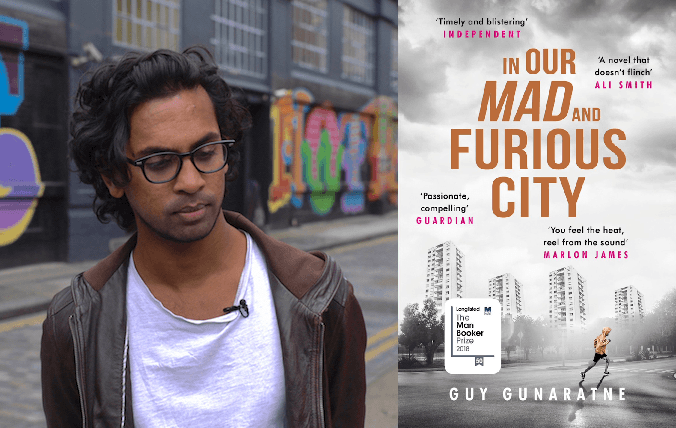 ‘A world leader who reads books at all is no longer a sure thing.‘

Guy Gunaratne is an author and documentary filmmaker covering stories of human rights in areas of post-conflict around the world. His novel In Our Mad and Furious City has been nominated for The Man Booker Prize, The Dylan Thomas Prize,  The Goldsmiths Prize, The Jhalak Prize, The Gordon Burn Prize, Writers Guild Awards and The Authors Club Best First Novel Award.

The results of slow accumulation containing great lumps of bad material, essential wrong turns, and the beginnings of (some) good concentrated passages.

Early mornings for the initial drafts, 5am to 9am. Strong black coffee. Ideally, this is in wintertime when the sun is not yet up and nothing in the world has happened yet.

I’m not sure how to answer the why question. I don’t think artists get to choose what they gravitate toward. I tend to be compelled by subjects that disturb me in some way. If I knew exactly why that is, I don’t think it would be necessary to write about it. It’s in the turning over in my mind as I’m writing that I can at least attempt an answer it. It feels like a confrontation of sorts, or an acceptance. I sit down and I go: ok – let’s have it out. Let’s have that conversation.

I’m working on my second novel. And I’m afraid I’ve been persuaded by higher powers against mentioning anything about it – not before it’s time. Good advice.

Paul Beatty once told me not to worry too much about the reception of my work, good or bad – ‘all that stuff passes’. And Ali Smith advised against listening to anyone except my wife. Both very wise.

6. What is your favourite book published in the past year and why?

I loved Will Eaves Murmur, a book that will last, and deserves to be read by everyone. Amy Sackville’s Painter To The King deserves far more attention than it received last year. And I recently enjoyed The Earlie King and the Kid In Yellow by Danny Denton.

I read Giorgio Bassani’s The Gold-Rimmed Spectacles recently. It’s translated by Jamie McKendrick. I’ve been on Bassani ever since.

8. What is a book you love that no one else has heard of?

Depends on who’s listening. Readers of Wasafiri have probably heard of The Secret Life of Saeed the Pessoptimist by Emile Habiby, a book that unfortunately isn’t as well-known as it should be. Add to that The Shutters by Ahmed Bouanani, translated beautifully by Emma Ramadan. And The Uncountry by Yanara Friedland.

9. If your newest work were a music album, what would it be?

The current book, maybe the album Never Were The Way She Was from saxophonist Colin Stetson and violinist and composer Sarah Neufeld.

Everyone seems to be reading Hannah Arendt lately. I think, usefully. I’d also encourage everyone to read Primo Levi. He reminds us that there are aspects essential to humanity that can never be extinguished – no matter how incentivised pessimism, cynicism and cruelty may be at any given moment. And a world leader who reads books at all is no longer a sure thing. If Jeremy Corbyn does become our Prime Minister, I’ll vow to send him a book a month.

In Our Mad and Furious City was reviewed in Issue 97 of Wasafiri which is available in both print and Kindle editions. It is published through Headline.