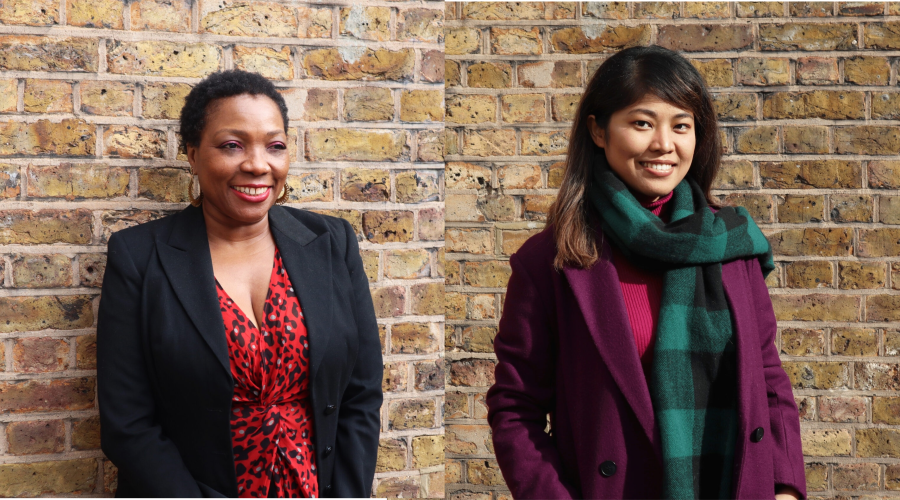 By Wasafiri Editor on November 10, 2021 in Interviews, Wasafiri Wonders

The Jerwood Compton Poetry Fellowships for 2021-2022 were announced on 2 November, with poets Dzifa Benson, Romalyn Ante, and Jamie Hale each receiving £15,000, and a year of mentoring support dedicated to developing their craft. The Fellowship supports poets whose practice encompasses poetry in the broadest artistic sense, – and aims to diversify and modernise the field. Prior recipients, including Raymond Antrobus, Jane Commane, and Anthony Joseph, have gone on to win the Ted Hughes Award, be shortlisted for the Forward Prize for Best First Collection, and more.

We warmly congratulate the three fellows, and spoke with friends of Wasafiri Dzifa and Romalyn. Dzifa is a regular book reviewer for both our online and print platforms, and Romalyn’s Antiemetic for Homesickness was the  subject of a review essay in Issue 107: Crisis/Recovery, described by reviewer Jennifer Wong as ‘imaginative’, ‘playful’, and ‘powerful’. Both poets work in ambitious and multi-disciplinary ways, oriented towards their communities as much as themselves.

Here, Dzifa and Romalyn answer questions on their practice and processes, allowing readers insight into the ways in which they work, read, and write.

Describe your first drafts in one sentence.

Dzifa Benson: It may sound a bit fanciful to put it like this, but my first drafts feel like an excavation of the soul and an exercise in faith because the ideas always feel so shy and nebulous, reluctant to come into the light and I have to trust in blind faith that what I want to say in my deepest soul will eventually emerge coherently.

Romalyn Ante: My first draft is like a cave: so dark and craggy but full of gems.

Tell us about your writing rituals.

DB: Rituals? I don’t think I have any! I’m not one of those writers who wakes up at 5am every day and has written 5,000 words by noon. Or one of those writers who must write to fulfil some kind of arbitrary daily word count. Maybe I should have some rituals? Would they make me a better, more disciplined writer? It’s debatable. I write any time of the day or night and most of the time that is dictated by need. More often than not, that’s the need to meet deadlines! Journalistic writing is my bread and butter so I just have to crack on and get it done because it’s extremely time-sensitive. When I’m doing theatre reviews, for instance, I’ll go and see a play in the evening and have to file my review by the next morning which is a very pressured way to write and often means writing into the small hours of the night, which is not ideal but okay because I’m a bit of a night owl. There’s no sense of the ritualistic with that kind of writing, I just have to get it done. It’s a different kind of writing headspace I occupy when I’m working on my own poems, plays, or stories. A lot of that time is spent daydreaming, testing words to see how they rub up against each other. If I have any kind of ritual that unites the different kinds of writing I do, it can be summed up in one word: research. I’m a research nerd, a knowledge hound. It makes me feel grounded. I do have a mantra that plays a constant refrain in my head, though, which is especially useful when I find writing particularly challenging: ‘Breathe….one word in front of the other…Breathe…one word in front of the other.’

RA: I do not really have any writing rituals. I used to write a poem at least once a day but it’s all changed since the pandemic and I have got so much work commitments. Sometimes, I write a finished poem in two minutes; most recently though, I’ve been wrestling with my work. I always have my Vicks or Tiger Balm. The scents relax me and put me in the mood for writing.

What themes do you gravitate towards and why

DB: I established very early on in my poetic practice that I was really interested in troubling the juncture between the dead, the living and the unborn. This is a result of transposing my Ghanaian, Ewe sensibilities into my writing in English. It has remained a constant and is so embedded in how I approach my writing that I don’t think about it consciously any more but is always there when I’m analysing what I’ve written. I’m also interested in mythology in general and Ewe cosmology in particular and how it informs a mythology of personhood and womanhood. I’m also really interested in connecting the historical precedents to the oppressions that happen in the twenty-first century.

RA: In my debut collection Antiemetic for Homesickness, I wrote about the human cost of migration, and the narratives of migrant nurses who are dehumanised and reduced to their functions. I write about family, womanhood, food, myths, pain, and healing. Because these are the things I always go back to in my darkest moments.

What’s the book you haven’t written yet, but want to be known for?

RA: Maybe I shouldn’t say what it is, just in case we jinx it.

What is the best writing advice you’ve ever received?

DB: Is it immodest to say that I follow my own writing advice? I was unable to write for a number of years following a traumatic event. The mantra, which I referred to above, was my path out of depression. I have found that just focusing on putting one word in front of the other eventually amasses into something meaningful. To put it another way: I try not to focus on the peak of the mountain I have to climb. Rather, I tackle the mountain, looking to just one foothill at a time.

RA: The whole world will convince you that writing isn’t important, and if you give in to that, then…

What is your favourite book or pamphlet published in the past year and why?

DB: Ooh, that is a tricky question. I review poetry, fiction, and non-fiction so I get to read many quality books all the time. They are all very different and all have their merits but if I had to choose a book that speaks to my poetic soul, that gives the feeling of I-want-to-write-like-that-when-I-grow-up, it would have to be Kayo Chingonyi’s A Blood Condition. Like me, Kayo is a dislocated African who, in that book, is trying to design a personal cosmology in the absence of proximity to his original, African one.

RA: I love Kostya Tsolakis’ Ephebos (ignition press) which explores what it means to come of age, and navigate one’s sexuality. It poses important questions about power –imbalance, the search for approval and a solid sense of self.

What is a classic you recently read for the first time?

DB: There are many classics on my bookshelves waiting their turn for my attention! My work as a critic dictates a lot of my reading habits so reading for pleasure has to be squeezed into a regrettably small window of time and when I do have time, I prefer to read more contemporary books.

What is a book or pamphlet you love that no one else has heard of?

DB: Machado de Assis’ Epitaph of a Small Winner which was published in 1881. It’s not exactly unheard of but it is unfamiliar to Anglocentric audiences – it’s got only one review of it on Goodreads and even that is in Russian! I hardly ever read the same book twice but have read it at least three times since I was eighteen.

RA: A lot of Filipinos know about this, but maybe the British landscape doesn’t: Noli Me Tángere by Philippine national hero, José Rizal. It was published during the Spanish colonisation of the Philippines, and its themes revolve around oppression, power, class, and education, and are beautifully tied by the tragic romantic narrative of Crisostomo Ibarra and Maria Clara.

If your newest work were a music album, what would it be and how would it sound?

DB: I got through the surrealism and inertia of the first pandemic lockdown in England by going on long daily walks fanning out in all directions from my home near the Thames in West London. All to a soundtrack of Afrobeats, pop music from Ghana and Nigeria. But I tend to like individual Afrobeats songs, rather than whole albums by artists like Burna Boy, Yemi Alade, Stonebwoy, Edem, Maleek Berry and DJ Tunez. I like all sorts of music and the play I’m currently drafting, featuring the classical musicians Joseph Bologne, Chevalier de Saint Georges, and Wolfgang Amadeus Mozart, asks the question: ‘Who owns music?’ So it’s difficult to settle on just one album, but if I must choose one which I return to again and again for inspiration, then it would be Cassandra Wilson’s Blue Light ‘Til Dawn.

RA: Acoustic rock. There’ll be a lot of group singing for the chorus, similar to my poem, ‘Tagay! [Drinking Lambanog with my Filipino Colleagues]’ (Antiemetic for Homesickness). There’ll be some solo finger-plucking arrangement too. Language, like music, has the power to create a sense of community and celebration.

Which books or authors are relevant reads in our political climate — or one you’d recommend to current world leaders?

DB: I recently reviewed lisa luxx’s debut poetry collection Fetch Your Mother’s Heart, a ferociously and vigorously politically engaged tract. The ‘mother’ in the title is a kind of summoning of a matriarchal spirit to offset patriarchy run amok.

RA: My grandparents would always tell me, ‘basahin mo ang puso mo’ which can be transliterated as ‘read your own heart’; I think they said this because they were illiterate. But I think it’s important to read ourselves first, because there is a lot of hatred, bitterness, and sheep-like behaviour, especially recently (understandably so; it’s been a tough year). Paulo Coelho said, ‘Everyone seems to have a clear idea of how other people should lead their lives, but none about his or her own’. We always bark at others to ‘do something’, but we do not know their own story or rationale for not doing that thing. We want them to think and act like us, and if they do not, we chastise them (inelegantly on Twitter sometimes). But everyone is struggling, and while there are so many important political topics and arguments in the world right now, I think we should be kind first, before anything else. Then, maybe you’ll know what kind of book you’ll have to find and read. Currently, I’m re-reading Earth Shattering, edited by Neil Astley, an anthology of ecopoems.

Dzifa Benson is a multi-disciplinary artist whose work intersects science, art, the body and ritual, which she explores through poetry, prose, theatre-making, performance, essays and criticism. She has performed nationally and internationally for Tate Britain, the Courtauld Institute of Art, BBC Africa Beyond and more, and she abridged the National Youth Theatre’s 2021 production of Othello in collaboration with Olivier award-winning director Miranda Cromwell. Dzifa Benson is a recipient of the 2021 Jerwood Compton Poetry Fellowship, a prize which champions the UK’s leading new poetry voices.

Romalyn Ante is an award-winning Filipino-born, Wolverhampton-based poet, translator, editor and essayist. She is co-founding editor of harana poetry, an online magazine for poets writing in English as a second or parallel language, and her accolades include the Poetry London Prize, Manchester Poetry Prize, Society of Author’s Foundation Award, Developing Your Creative Practice, Creative Future Literary Award, amongst others. Apart from being a writer, she also works full-time as a nurse practitioner, specialising in providing different psychotherapeutic treatments. Romalyn Ante is a recipient of the 2021 Jerwood Compton Poetry Fellowship, a prize which champions the UK’s leading new poetry voices.