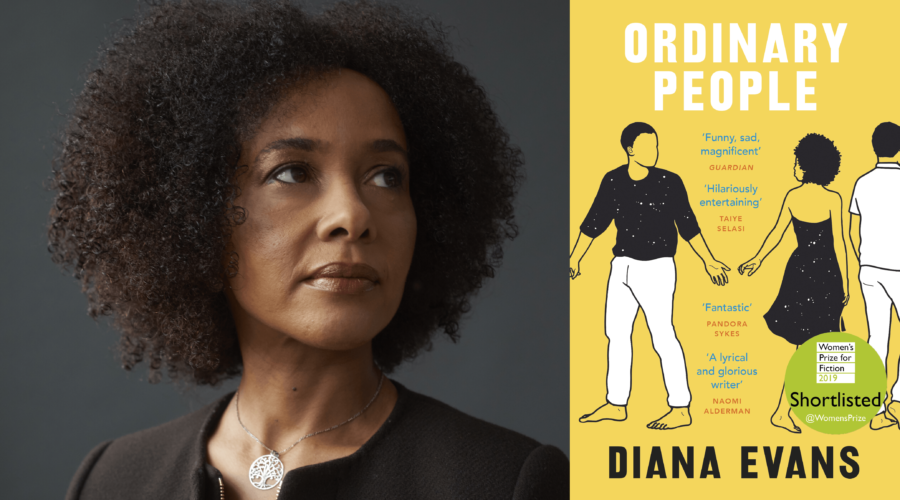 ‘Ordinary People is already a kind of music album in literary form and has its own playlist, downloadable from Spotify.’

Diana Evans is the author of Ordinary People, The Wonder and 26a. She has received many awards and nominations for her novels, including for the Women’s Prize for Fiction, the Andrew Carnegie Medals for Excellence in Fiction and the Guardian and Commonwealth first book awards. A former dancer, she also publishes essays and criticism.

They’re a very un-Virgo beast-like mess requiring almost complete overhaul and thus tiring; each time I must rise to the challenge.

A large breakfast before writing and peppermint tea throughout. I like to write most of all at my desk in the corner at the top of the house, surrounded by particular objects of special meaning or memory. The computer I write on has no internet connection.

Extreme mental states, grief and bereavement, family dynamics, complex fathers, women’s subjectivity and survival, sisterhood. These are the concerns I was led to think about during my childhood and early adult life and they continue to interest me. My instinct is my guide through my writing and I listen to it very closely.

Ordinary People is my most recent novel, about two couples struggling with relationships, parenthood and the onset of middle-age during one year in London.

‘Write a scene’. Bernardine Evaristo said this to me when I was struggling to write my first novel 26a, and it opened up the story for me, helped me see it as a dramatic entity rather than just an idea.

I love Ta-Nehisi Coates’s writing and have great hopes for his first novel The Water Dancer. Anna Burns’s Milkman is the best thing I’ve read in a while.

The House of Mirth by Edith Wharton.

A little book of Jean Rhys’s stories called Let Them Call It Jazz I’m very fond of, but I doubt I’m the only one.

Ordinary People is already a kind of music album in literary form and has its own playlist, downloadable from Spotify. Eclectic R&B, soul, reggae, jazz and pop, a lot of John Legend.

The poetry of Mary Oliver.

Ordinary People is published by Chatto & Windus and the novel recently won the South Bank Sky Arts Award for Literature.  Diana Evans work will be published in our special 100th issue ‘An Island Full of Voices: Writing Britain Now’ to commemorate 35 years of Wasafiri.