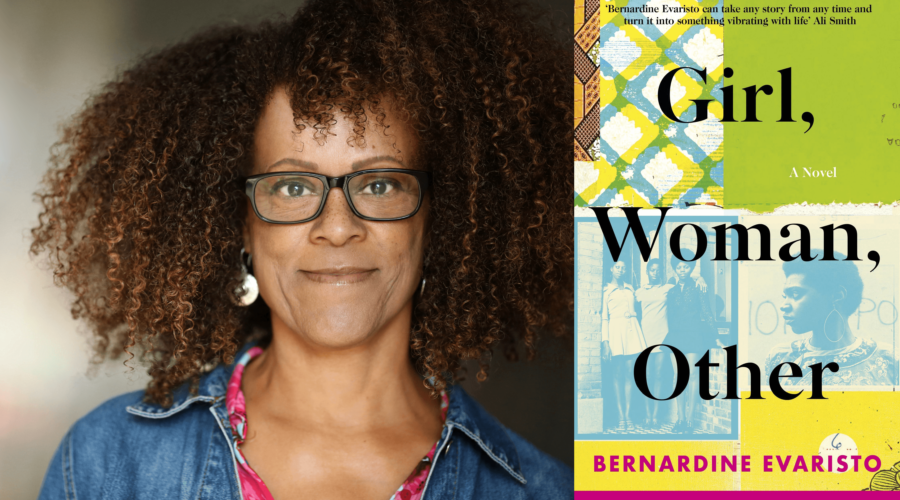 By Wasafiri Wonders on July 3, 2019 in Articles

‘My books explore the African diaspora: past, present, real, imagined. I’m always surprised when some people find the idea of this limiting.’

Bernardine Evaristo is the Anglo-Nigerian award-winning author of eight books of fiction that explore aspects of the African diaspora. She is Professor of Creative Writing at Brunel University London and Vice Chair of the Royal Society of Literature and a literary activist for inclusion. Her latest novel is Girl, Woman, Other.

A free-flowing waterfall within which a building is being constructed, brick by brick, as the water flows into it and over it.

I’m not sure I can separate my writing rituals from my life rituals. Sitting at my desk and typing into my computer for much of it is a necessity, although revising away from it is equally important. Food, drink and exercise are rituals built into my writing time, as is a siesta. Being distracted by the internet is a ritualistic habit I am always striving to break.

My books explore the African diaspora: past, present, real, imagined. I’m always surprised when some people find the idea of this limiting, encompassing as it does a continent of  54 countries and the rest of the world, and over a billion people, and all the grand themes relevant to the human race.

‘Girl, Woman, Other’ is a polyvocal novel about twelve primarily black British women and their intersecting narratives – capturing the essences of their lives, histories, dramas, complexities, careers, politics and relationships. The women, or rather womxn (one character is non-binary) are distinctly different, range in age from nineteen to ninety-three and are a mixture of classes, sexualities, occupations, cultural backgrounds and UK geographies. The novel is set today but spans over a century. I’ve coined the term ‘fusion fiction’ to best describe the novel’s form. Each woman has her own chapter, but she is also fused into the narratives of some of the other women (for eg, there are four mothers and daughters) mapping a series of interconnected relationships. I also employ a kind of poetic patterning and unorthodox punctuation to create a fluid segueing between the past and the present and with the character’s interiority and exterior reality. The form and the narratives coalesce into a ‘fusion fiction’.

To give my characters strong desires which I must then stop them from achieving. If you give people what they want straight away there is no tension, no drama, no story.

I’m asked this question a lot but there are so many great books and pamphlets being published at the moment that it’s hard to pick a single work. I tend to highlight books that are overlooked but I’ll make an exception in this case because I think all UK academics should read Taking Up Space: The Black Girls Manifesto for Change by two recent graduates, Chelsea Kwakye and Ore Ogunbiyi, about the experience of being black students in predominantly white universities. The book is deservedly receiving a lot of publicity because it’s the first time we’ve heard how discrimination manifests in our academic institutions – from the young people at the receiving end of it.

Barracoon: The Story of the Last Black ‘Cargo’ by Zora Neale Hurston. Technically not a classic in that it was first published in its entirety in 2018, but an ‘instant classic’ in terms of its historical origins, originality and significance. The book recounts the story of Cudjoe Lewis, arguably the last survivor of the Middle Passage from West Africa to America, as told to Hurston in 1927, and written using his vernacular. Hurston couldn’t find a publisher for it in her lifetime. It’s extraordinary to hear first-hand someone’s personal account of enslavement in his own voice, drawing us in and telling us about his experiences in the nineteenth century, before, during and after slavery.

I came across the exquisite and unique novella Venus as a Boy by Luke Sutherland some years ago and loved it. I teach it at Brunel and my students love it too. It’s probably not completely unknown but it’s certainly off the literary radar and needs to be acknowledged.

Very orchestral, choral, jazzy, global yet with some urban notes, a mixture of sounds – from Grime to Fela Kuti to classical European, acapella, powerful female singers, haunting melodies, dance music through the ages, some folk, lover’s rock, r n’ b – etc etc. In other words, I have no idea!

For European leaders in particular, I’ll recommend Afropean: Notes on Black Europe by Johny Pitts (Penguin 2019), a comprehensive account of his encounters with black people and communities across Europe. With today’s far-right encroachments across the continent, it’s crucial that we argue for the value of multiculturalism, inclusivity and equality of treatment and opportunity. Digging beneath the surface of white Europe to unearth its black history and explore its black communities is good place to start.

Girl, Woman, Other is out now. Bernardine Evaristo will be speaking at Africa Writes alongside Ayòbámi Adébáyò, Nadifa Mohamed, Namwali Serpell and Margaret Busby to celebrate and discuss the anthology New Daughters of Africa.