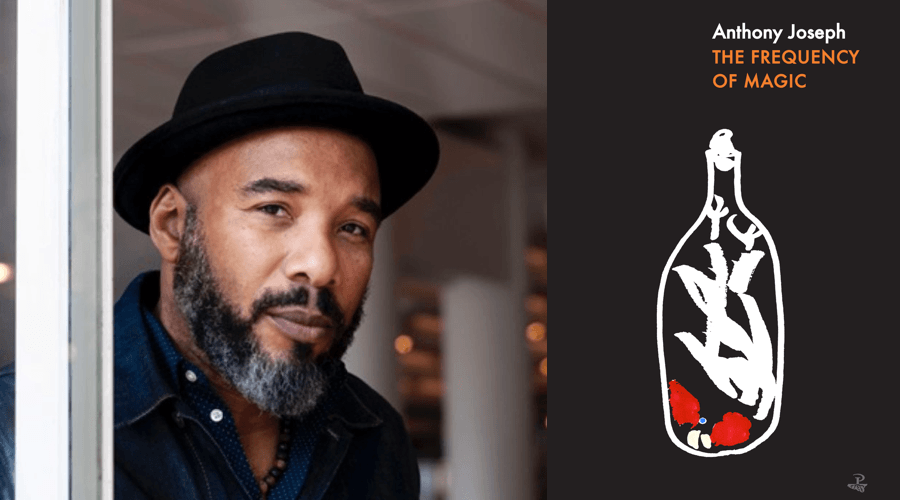 By Wasafiri Editor on December 5, 2019 in Articles

‘…I have become more Trinidadian away from Trinidad. It’s a liminal position, being a Caribbean writer in the UK. For me, it is a position of longing but also of transformation through longing.’

Anthony Joseph is a Trinidad-born poet, novelist, academic and musician who has been referred to as ‘the leader of the black avant garde in Britain.’ He is the author of four poetry collections, as well as Kitch: A Fictional Biography of a Calypso Icon (2018), which was shortlisted for the Republic of Consciousness Prize, and The Frequency of Magic (2019), his latest novel. He is a Jerwood Compton Poetry Fellow for 2019/20.

My fiction drafts are usually sketches free written/automatically, in one sitting, then gradually and delicately coloured with sound and verisimilitude. Poems have a similar process, though sometimes a poem, a line, or a melody may slip through a gap in language and arrive fully formed.

I (usually) create first drafts between two and five am when I’m sitting on my sofa. I use a computer as I like the propulsion of it. There is also something about the keyboard that reminds me of the keys of a piano and I play/write along with Rahsaan, Monk or Tyner, sometimes its jazz or soulful calypso, ’80s soul can write me into the sunrise. The music – its invocation, its nostalgia and its swing – invariably seeps into the text. At other times, a long train or plane journey is enough. I edit at a desk in the daylight, starting in the morning and working my way towards the completion of a draft by nightfall.

I came to the UK as a young adult, and so my life in Trinidad remains a rich source of inspiration and image: colours of the landscape, bird song, my parents, their life force, and our extended family with all its archetypes, the fervour of Port of Spain, adventures at carnival, calypso, steel pan, all these are my universe, and I have become more Trinidadian away from Trinidad. It’s a liminal position, being a Caribbean writer in the UK. For me, it is a position of longing but also of transformation through longing. I remember Walcott saying in an interview once that, ‘the tone of every poem is a tone of lament for loss.’ This is also true.

In my recent work, the images, characters, and landscapes align with universal motifs of decay and death. Powerfully elegiac and memorialised, they are not derivative but associative.

As a poet, I’m interested in the musical and beauteous potential of both creole and standard English. But I am also a surrealist – and at times an absurdist – and my writing is always searching for the things language has not yet said.

At its simplest, The Frequency of Magic is about a village butcher and would-be novelist, Raphael, who has been writing a novel for 41 years. The characters in the novel have become tired of what has become a tedious process. Some have died, some have found ways to escape the text and to enact volition in their own lives. Since Raphael does not revise what he writes, he does not realise that some characters have left the book. There are 100 chapters of 1,000 words each. The idea of narrative simultaneity, rather than the linear or causal trajectories of more western fiction, are at its core—and narratives interject and disrupt each other. I am, I think – as many postcolonial writers are – engaged in a battle against the grand narratives of colonialism and imperialism, and the literatures that accompany them. The Frequency, in that respect, is quite subversive. It is also a homage to Malick Village in Trinidad, where my father’s family have lived for generations, to my father, my great uncle Christo (on whom Raphael is based) as well as a paean to mortality and the decay of memory and familial mythologies.

I’ve been lucky. The best is hard to determine, but two come to mind—which were more philosophical than instructive: Lauri Scheyer at my residency at CSU, Los Angeles, convincing me to read from my journal by saying, ‘the personal is the universal.’ Earl Lovelace, at a party in Trinidad, telling me, ‘The story exists, plot is just how you tell it.’ Earl gave much, so much of what we call the ‘seppy’ in Trinidad, the secret knowledge.

New Daughters of Africa (2019) edited by Margaret Busby—possibly the most important anthology published in 2019, featuring some of the most incisive and visionary writing I’ve read in a long time. I can’t think of anything else I’ve read this year that matches this for its scope and beauty.

The Spaces Between Screams: A Collection of Urban Tragedies by Kemal Mulbocus (1997)

My friend Kemal’s debut, and sadly, only collection of stories. A visceral and impassioned writer, he died while working on an epic novel at thirty five.

From the Calabash: Poems and Woodcuts (1978) by Motshile wa Nthodi

Beautiful woodcuts in red and black accompanying moving and vibrant poems that celebrate the cycle of life in an Ndebele village in Zimbabwe. Published in 1978, long out of print.

It would be what my next album might sound like: a fierce, funky spiritual jazz quest with tinges of psychedelia and surrealist poetics.

10. Which books or authors are relevant reads in our political climate—or one you’d recommend to current world leaders?

An extract from The Frequency of Magic first appeared in Wasafiri 100, which you can read online, or buy from our shop.

Anthony Joseph’s The Frequency of Magic and Kitch: A Fictional Biography of a Calypso Icon are published by Peepal Tree Press.