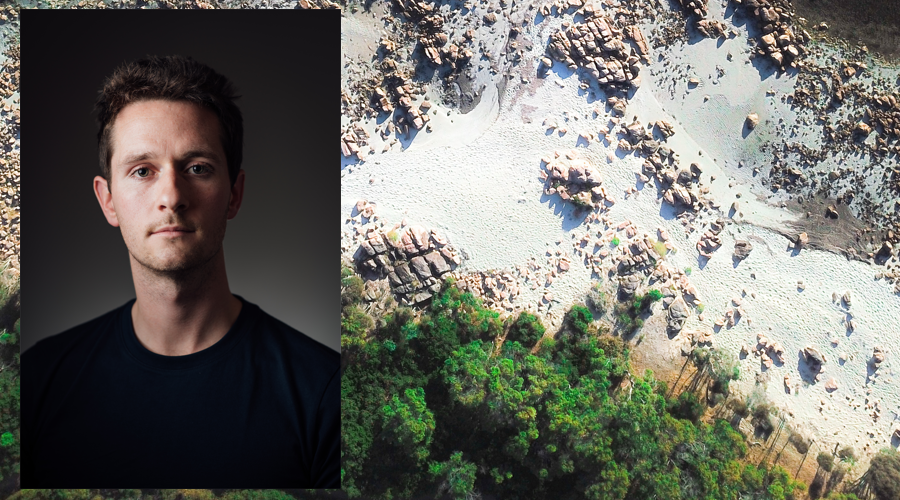 By Wasafiri Editor on March 16, 2021 in Articles, Global Dispatches

At least it’s good for the planet, we say to each other. At least there’s a silver lining. With fewer planes in the air, fewer cars on the roads, fewer cruise ships smouldering over the ocean, there has to be a positive effect on the environment. It makes so much intuitive sense: we’re all stuck at home, going nowhere, reducing our footprints, burning less carbon. From our windows the skies seem clearer, filled with a fresher breed of air. Smog appears to be hazing away. Oceans are probably cooling. Forests are surely flourishing. This pandemic, deadly and devastating as it is for the people part of our world, must be good news for the non-human elements we share it with.

Yet during this lockdown lowering of emissions, a rare and curious fish has quietly ceased to exist.

The smooth handfish (sympterichthys unipennis) was once found in the seas off Tasmania’s east coast. It was a strange, sluggish creature that stuck to the shallows, only moving when it had to. It gave birth to live young, was about six inches long, had a strange barb on its skull, and possessed armlike fins with fingerlike protrusions (hence the name­) that allowed it to walk across the sandy seafloors of its home. When Europeans first came to those waters, the species was reported as common. Shortly afterwards, it disappeared.

Covid-19 didn’t kill the smooth handfish. It’s likely that it had been gone for a while—it had been nearly two hundred years since the last recorded sighting, making the recent declaration of its extinction by the International Union for the Conservation of Nature somewhat of a formality. The fact that this announcement came during the pandemic is a coincidence; we can’t seriously blame a virus in 2020 for wiping out a fish that hadn’t been seen in two centuries.

And yet it is the first modern marine fish on record to go extinct. The very first, and like so many other creatures that no longer live on our planet, its disappearance is undoubtedly our fault. And as we wait out the lockdown indoors, consoling ourselves with the knowledge that we’re wafting less coal into the air, the effects of global warming continue to ravage our planet.

The smooth handfish lived so far south because it preferred cooler waters—waters that we have warmed. The temperature of the ocean off Tasmania’s east coast has risen by two degrees since 1900 – a rate of heating four times higher than the global average – which pushed the handfish further south, drastically reducing its range. And in these already uncomfortable waters, unwelcome invaders were drawn to the warmth—invaders like the long-spined sea urchin, a creature whose numbers have proliferated in the area, and whose insatiable appetite has turned large swathes of the seabed into a barren moonscape.

The smooth handfish’s dwindling habitat had already been damaged by scallop dredging, fishing, and the destruction of oyster reefs. With its glacially slow speed, its non-larval breeding process and its propensity to stay still, the species was always going to be vulnerable to changes to its environment. Yet of all the challenges it faced, it was the temperature that threatened it most. It needed cool, shallow seas. We took them away.

These warmer waters weren’t just bad news for handfish. Tasmania is famous for the uncommon beauty of its wilderness, but most people don’t know that, until recently, some of its most spectacular forests were underwater. Great stands of kelp once towered over the seabeds of our east coast; rich, vibrant habitats for vast and varied quantities of sea life. Like many aquatic life forms, kelp struggles to adapt to even a small change in temperature or environment. Coupled with the relentless hunger of the invading urchins, which nibbled through the fibres that tethered the kelp to rocky reefs, this proved devastating. Without the nutrients found in cooler water to sustain them, and without roots to anchor them firm, these once-mighty forests lost their strength and vitality, and wafted into the waves. To see them now is to visit piles of dead-brown vegetation, clumped on white beaches and ochre-orange rocks, rotting under a hard sun. Underwater, what were wondrous, shifting avenues through cities of kelp have become blank, watery fields. The colours are gone. The seas are hollow.

And that is not all, nowhere near it, for in recent years our terrestrial trees have fared just as poorly. People know about bushfires in Australia, and how eucalypts have evolved to exist alongside them. How quickly these trees regrow, as other species flounder in the ash. How some varieties need fire to trigger seed-drops and germination. How on hot summer days you can smell the oil leaking from their leaves, see it hazing through the air—an ancient thirst for flame.

But when the fires of 2016 chewed over Tasmania, birthed by strikes of dry lightning that ignited over 80 uncontained blazes, eucalypts weren’t the only trees their hungry tongues licked. Some were native conifers, such as pencil pines and King Billy pines—pale-trunked, thick-needled, slow-growing totems of patience that live only in the cold, damp Tasmanian highlands, where fire is – or was – rare. These are Gondwanan trees, ancient and archaic. Standing in their presence – particularly beneath a tall, mossy, charismatic King Billy – is to experience the quietest, humblest sense of joy that wood and leaves can offer. They did not evolve to burn, and when the inferno climbed over the tiers and roared toward them, they were defenceless.

Only their blackened skeletons remain, their dead limbs still reaching over mirror-faced tarns. Some of these trees were over 1,500 years old. They will not recover. They will not regrow. Beneath their roots, the fires that killed them hibernate in the fibres of sunken, slow-burning peat, waiting to re-emerge when the weather’s violence eventually summons them.

There are other handfish. The smooth variety wasn’t the only one of its kind. But none of the others are well understood or often seen, and three of the remaining species – the spotted handfish, the red handfish and Ziebell’s handfish – are critically endangered.

We’ve seen extinction in Australia many times before. 34 mammals that were present on the continent before the European invasion are gone—about the same number of mammal species that have disappeared from the rest of the world’s countries combined during the same time period. Our rate of extinction hasn’t slowed down either; it remains about the same as it was during colonisation. Laws to protect these species are drawn, ignored, exploited, side-stepped and re-drawn. Everyone appears to be furious. All the while, native animals die in the millions.

The most iconic of those vanished creatures lived here in Tasmania: the thylacine. Its likeness is emblazoned across our businesses, our beer labels, our sporting teams, our coat of arms, the ubiquitous logo of our State Government, constantly reminding us – at least, those Tasmanians descended from colonial settlers – of the apex predator we deleted from the island. Every few years, there is talk of cloning them back into existence. In the meanwhile, our museum curators comb at the stuffed corpses, and our forests throng with unhunted wallabies.

Will we miss the smooth handfish the way we miss the thylacine? Probably not. It wasn’t charismatic megafauna, and most people didn’t even know it once existed in the first place. It’s hard to see it being added to all the shining logos our long-dead tiger still stalks. It’s hard to imagine scientists trying to clone it. And even if they were so inclined, what would be the point? To toss it into a bath-warm sea, and watch it die again?

Through this pandemic, we’ve grown to miss other things—the things people are missing all over the planet. Our families. Our friends. Our jobs. The ease at which we could move through the world. Like everyone else, we’re spending a lot of time talking about what we’ll do when we lurch out of this pandemic. When things go back to normal. When we can travel again.

The data shows that our hunches were true: we have lessened our emissions this year. But just like the infection rates we’ve followed so closely, the numbers aren’t as promising as we might hope. It would take decades of lockdown to balance out what we’ve done to the planet over the last century. And as soon as Covid-19 is gone – if it ever does leave us, if it doesn’t linger in our breath and spit forever – this hiatus in pollution will rush to a halt. Unless we change a great many things, it will have been a brief, near-inconsequential blip in our history of deadly, destructive heating.

It’s hard to focus right now. It’s hard to know what to be angry about, what to be sad about, what to do when we’re not meant to do anything. The world is infectious, and people are refusing to wear masks. Underwater, a little fish is gone forever. Preventable death—we are thrashing in a sea of it.

But if there is one thing we should feel, it is a sense of urgency. If anything should cause this, it is bearing witness to extinction. The loss of a species leaves our world irrevocably smaller, more hollow. It is an absence of colour and texture that cannot be replaced. And beyond the death of a unique creature, it’s a colossal cheapening of the most precious thing on the planet: life. Yes, it’s hard to focus, it’s hard to know what to do. Yet we must do something. At the very least, we must crawl out of this pandemic with the aim of helping the entire world recover, not just ourselves.

Here in Tasmania, the snows are weak. The ancient trees are dead. The kelp forests are gone. And the smooth handfish is a curious ghost, boiling in the shallows of our peripheries.

Robbie Arnottis a Tasmanian writer who was born in Launceston in 1989. Flames, his highly acclaimed first novel, was published in 2018, and was shortlisted for the Victorian Premier’s Literary Award for Fiction and the Guardian Booker Prize, and longlisted for the Miles Franklin Literary Award. His latest novel is The Rain Heron. He lives in Hobart. Photo Credit: Mitch Osborne

This piece is published as part of the Queen Mary Wasafiri Global Dispatches series, where six writers will send dispatches from around the world – writing from Tasmania and South Africa, the UAE and Argentina, England and Canada – and reflect on themes of Climate, Justice, Childcare, Racism, Futures, and Isolation—all in the context of Covid-19.

Read Dr. James Bradley’s response to Robbie Arnott, and the topic of Climate and Covid-19.