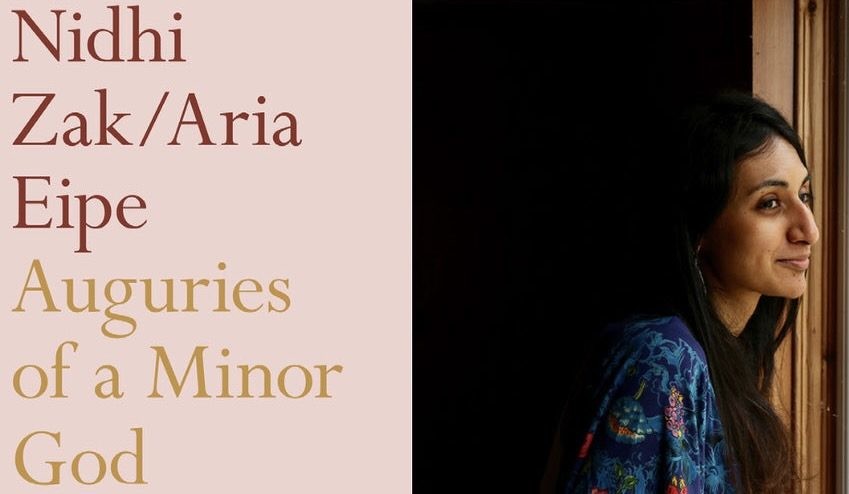 In these two poems from Nidhi Zak/Aria Eipe’s Dylan Thomas Prize-shortlisted collection Auguries of a Minor God, the poet explores her own writing process, and the complex construction of her verse. Together, these extracts and accompanying commentary provide both a unique understanding of the rich meaning that these poems carry, and an insight into her poetic craft.

What birds plunge through is not the intimate space

But it isn’t a bird

it’s a man in a bird suit
a song inside him, blue
shoulders instead of feathers.

There is a sky, teeming with winged
things, birds with fiery plumage
winging wildly across the white

a stand of white pines

the day-blind stars
waiting with their light.

Suddenly she puts out her wing –
the whole, full, flirtatious span of it:

blackbird, my lord,
as nothing will hurt you
I’ll sing as I love.

On ‘What birds plunge through is not the infinite space’

Auguries of a Minor God opens with the arrows of Kāma – a love god without wings – who travels through worlds on the back of a green parrot, Suka. The parrot, a species that is known to form long-term monogamous pairings, is a harbinger of spring, symbolising an opening-up of the natural world and the blossoming of romantic love. Flight, in all its manifestations, lives at the heart of this collection — and I wanted to capture that fluidity and movement in the visual pattern of the poem as well.

This cento emerged as a tribute to some of the poems and poets whose work has transformed me. These poems did not simply change my perspective or approach; they took over my imagination. They are the lines I could not forget. I returned to them as one who believes in the Fates returns to cards, tea leaves, entrails, constellations — divining something from their alignment, the way they nestle up against each other, the resonances they echo.

Taking its title from Rainer Maria Rilke’s poem beginning with the same line, Rilke’s second stanza begins, ‘Space reaches from us and construes the world. / To know a tree, in its true element, / throw inner space around it’. It is this space, this vastness within transposed to the Open without, that I wished to trace through the cento. In its structure and stillness, in what it sings and stays silent about, I hope the arrangement of these extraordinary phrases allows for the miraculous to shine through.

you said you really needed coffee so we walked into the first place with
display pastries in the window and while you stood there indecisive
in front of the chalkboard menu I looked so carefully at the posters plugging
those coconut oil espressos, ran my fingers through the hand-picked fairly
traded artisan-roasted brown beans sourced direct from the farmers’ co-op
in Guatemala, even waved my phone over the QR code which showed a
short film of Jos.’s highland farm in Huehuetenango with its gleaming
cherry-red berries, and all this simply to avoid meeting the gaze of the dark
flute-boned cashier with the letters I-N-N-O-C-E-N-T embedded on the gold
badge on his chest a bright star blazoned across his jersey striped with the
colours of Cameroon who was asking you now what you wanted, but the
thing is it didn’t sound like talking it sounded as if his throat was melting
and so were you and me, me too.

This poem employs mirrors — the glass of the café through which one first encounters temptation; the reflection of the screen permitting a curated glimpse of a distant smallholding; the promise of danger and desire enacted through the seeing eye, the hearing ear. ‘Desire is the desire of the Other’, Jacques Lacan theorised, and ‘Innocent’ orbits this projection of fantasy in the face of the other.

In writing it, I was interested in exploring the café – a ‘third place’ – at the intersection not only of public and private space, but also of public and private desire. The sensual aspects in the poem are heightened: smell, sight, sound, the anticipation of touch andtaste. Colours and textures come more sharply into focus; movement slows. The immediacy of the encounter rubs up against the transient nature of the space and the people who inhabit it, those who linger from elsewhere, just passing through.

‘Everything begins, and ends, with the eye, within the eye,’ wrote Roberto Calasso. This poem tries to find a vantage point to situate the seeing ‘I’ before the speaking ‘I’ — as we gaze, back and forth, you and eye.

Nidhi Zak/Aria Eipe is a poet, pacifist and fabulist. Auguries of a Minor God, her first collection, was published with Faber & Faber in 2021. Shortlisted for the Dylan Thomas Prize and the John Pollard Foundation International Poetry Prize, it was chosen as a Poetry Book Society Recommendation, National Poetry Day (UK) Recommendation, Shakespeare & Co. Year of Reading Selection, and a Book of the Year by both The Irish Times and The Irish Independent.