‘Too much talking. We’ve got work to do’ 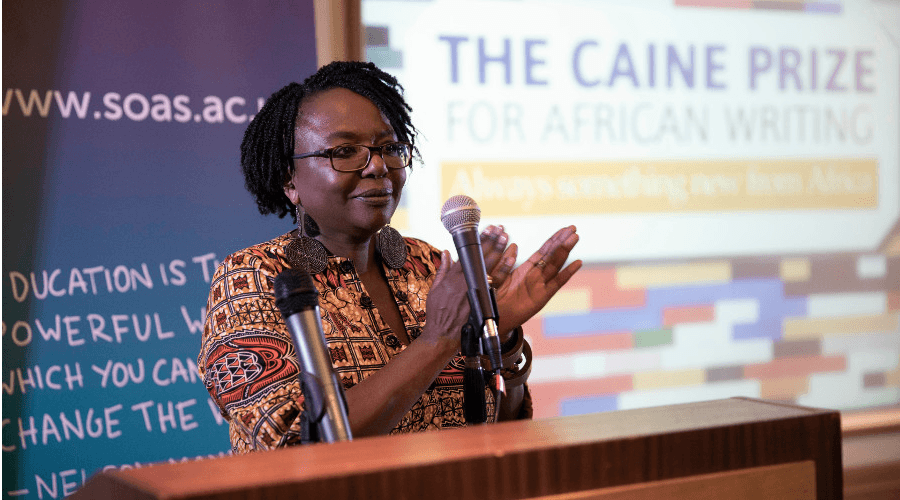 Ellah P Wakatama OBE is Editor at Large, Canongate Books Ltd.; Senior Research Fellow at Manchester University (Centre for New Writing) and Chair of the AKO Caine Prize for African Writing. She is a trustee of The Royal Literary Fund and sits on the Advisory Board for Art for Amnesty and the Editorial  Advisory  Panel  of  the Johannesburg  Review  of Books. She  is  the editor of Africa39 (Bloomsbury, 2014) and the anthology, Safe House: Explorations in Creative  Nonfiction (Dundurn/Cassava Republic) and is a contributor to New Daughters of Africa (Myriad Editions, 2019). Her  introduction  to Woman of  the Aeroplanes by  Kojo  Laing  was  published  by  Pearson  in 2012. In 2011 she was awarded an OBE for services to the publishing industry and in 2016 was named one of New African Magazine’s ‘100 Most Influential Africans’.

Over email, she spoke to Wasafiri about her new role as Chair of the AKO Caine Prize for African Writing – which turns twenty this year – and looks to the past and future of the Prize.

Sana Goyal for Wasafiri: When we met at Berlin’s African literature festival last April, you’d just been named the new Chair of the AKO Caine Prize for African Writing. You said then: ‘I have changes to make.’ How has it been since you stepped into this role almost a year ago? What have you been up to?

Ellah P Wakatama OBE: I remain hugely excited by this role. It feels such a huge responsibility to be steering a Prize that has the power to change writers’ lives, and to shape the future of what we read. The first task I faced was raising funds. The Prize has a bedrock of committed and generous donors and this year we secured additional funding from the AKO Foundation. Having that support to bolster our coffers has meant that we can plan strategically, and with confidence for the immediate future.

The Prize is in the challenging position of having helped shape a literary movement through the careers it has launched and celebrated in its first twenty years. We are no longer the only Prize for short stories by writers from African countries or of African descent. For me the main strategic challenge is to ensure that we remain relevant, that we continue contributing to the amplification of these voices and that we grow within our mission in terms of expanding our activities to include editorial support for writers and with more activities in partnership with literary organisations on the Continent.

The (AKO) Caine Prize for African Writing is in its twentieth year. What’s your diagnosis of the Prize so far? Any lessons learnt from the past, your plans moving forward – taking it in a different direction, perhaps?

Rather than taking the Prize in a different direction, I want to see how we can continue to do what we do but to do it all better and with more ambition and a wider reach.

Tell us more about the just-announced judging panel for the 2020 Caine Prize. How did you curate it? What did you want the spirit of the jury to stand for, or say about those who are tasked with awarding ‘African writing’?

In thinking of the ideal judging panel I started with the Chair. I wanted someone who had organisational experience – who knew how to lead a team with imagination and an ability to bring out the best in others. I had met Kenneth at a South Bank event and was intrigued by the range of his experience in the Arts. The other judges represent the great diversity of the Continent in terms of countries of origin and each brings a unique perspective. For me this is key – variety and expertise to ensure that the eyes judging the Prize will read for innovation, excellence and range.

The Caine Prize is a British prize for African writing. Some of its strongest critics can be found within its roster of winners (and shortlisted writers). Namwali Serpell, who split her winnings with her fellow shortlistees in 2015 – in what was later called an ‘act of mutiny’ – recently spoke to Wasafiri of the ‘philanthropic model that persists in the form of these prizes… this sense of patronage that sometimes feels literally patronising […] That sense that we must be grateful because we’re being ‘launched’? I find it quite condescending. There’s also a kind of NGO-ism about it,’ she said. Can you speak to these concerns regarding the Prize’s neo-colonial nature?

That phrase ‘neo-colonial’ is one I really try to avoid. Indeed, any definition of Africa’s current cultural heritage that centers itself on the colonial experience (as if that is the only thing that defines us) is one that I am not interested in. And yes, we acknowledge that we are a Prize based in Britain. But Africans are everywhere – we have and we always have travelled, sojourned and  settled away from home. We have ‘sister’ Prizes based on the Continent and I would hope that we are seen as working together. In the end, I am focused on the ability to reward writers, to celebrate their work and to help bring that work to as wide a readership as possible. I love being able to help put in a writers’ pockets and this is what the Prize does. Support for the Arts, and for literature in particular, has to be philanthropic, there is no money to be made in the award for a Prize. My own role, for example, is unpaid. What we do (our donors, our trustees, our advisory council members) is based on a belief that this work can make a difference, can help shape our culture – so it is philanthropy and that is to be celebrated. But it doesn’t have to be patronising. As to Namwali’s comment regarding ‘NGO-ism’ – we are working hard to ensure that our writers, across all our programmes, are respected and feel that the Prize is working for them. We are nothing without their work, their talent. And as our staff and board develops to reflect the faces of the Continent, I hope this is something that will become a criticism of the past.

In an article in the Guardian, you write: ‘A prize that focuses attention on the African origins of the writers allows the judges, faced with a pile of submissions, the freedom to dismiss that unifying criterion.’ There’s this continental impulse when it comes to the Caine Prize. What ‘African literature’ is or isn’t, who an African writer is or isn’t, has been debated ad nauseam. Questions around authenticity and identity, appropriation and ghettoisation – the ‘African-ness’ of a Caine Prize story – have plagued the Prize time and again. What, for you, comes with this ‘freedom to dismiss that unifying criterion’?

It’s the freedom to look at the stories as individual works. To judge them based on artistic excellence and impact without the burden of geography and biography that writers from the global South in particular are so often assigned.

Over the years, the Caine Prize has gained the reputation of being a literary rite of passage of sorts for African writers (one can be ‘Caine-anointed’). But it’s also been accused of telling a single, or limited story of what writing from a continent can look like and be, of pandering to western stereotypes, called out for its failure to represent the region fully – including geographically or linguistically. Scandals galore and gatekeeping aside, the Caine Prize still seems to stand on a pedestal – prestigious and tall. Is there such a thing as the ‘Caine Prize story’? With the proliferation of prizes on the continent, how does the thus-far premier Prize for African writing hold its own?

There are now a handful of important and influential Prizes that work towards the same goals as us. Our task is to make sure that in our appointment of judges we are creating a space for celebration of excellence that all can recognise. We have to work hard to continue to be relevant and we cannot rest on the past success of the Prize. For me this is about a constant reminder that we are here for the writers and for the readers. It is a kind of gatekeeping – yes. But that’s how culture works, that’s how canons are formed. Sitting in this Chair, my task is to make sure that those gatekeepers have open minds and open hearts, and that we are accessible.

You’ve sat on the panels of several international literary prizes. It seems to me like the perception of prize culture has shifted, changed in the public eye. Thinking back to the 2019 Booker Prize for Fiction announcement, or last year’s Nobel Prize in Literature – people are talking about literary prizes, taking them more seriously… Why do you think this is? We’ve also seen a lot of ‘firsts’ – with Bernardine Evaristo’s and Roger Robinson’s wins. Coupled with PoC-centred publishing – including Stormzy’s Merky Books imprint and Jacaranda Books Twenty in 2020 initiative, to name a few – is this the start of a new chapter, or conversation for UK publishing and prize culture?

I really hope it is. But we have had these false starts before. My focus is no longer on those conversations British publishing likes to have with itself around ‘diversity’. Too much talking already. We’ve got work to do.