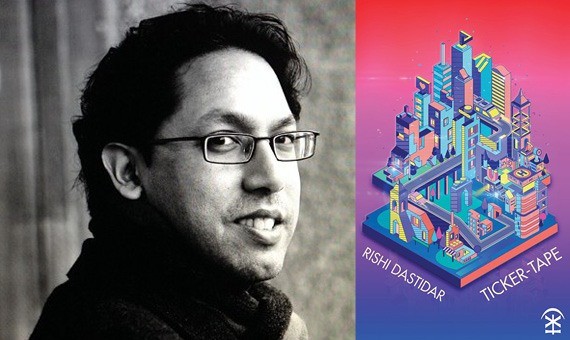 On first encountering the idiosyncratic titles of poems on the index page of Ticker-tape (such as –  ‘Deconstructing an attempted date with Miss Pacific Standard Time’, ‘Joystick Valhalla’, ‘All the laurels in the world, and you give me these?’, ‘Bantz’ and ‘A shark comes to dinner’), the reader is primed for the poems inside that pop and fizz with wit and modernity – rather like the way the neon pink fluorescence of the cover catches and holds the eye in its day-glo glory. And that quirk of title is indeed reflected in the distinctive tone of the poems themselves. It isn’t so much that the poet sounds like no other. That’s close to the truth but it’s nearer the mark to say that the poet sounds entirely like himself, with a gaze firmly fixed on the digital, pop cultural and musical here and now. Given the sensibilities that inform his poetics, it’s not surprising to find out that Dastidar’s day job is in advertising.

There is plenty of manoeuvring the reader must do and plenty of room in which to do it – politics, pop, love, sex, art, state of the nation, diversity, advertising, technology, Kaiser Wilhelm II and even The New Yorker magazine are some of the things that come under the poet’s scrutiny. Sometimes these poems ask the reader to turn on a dime that’s a tad self-referential but perhaps it’s as an examination of 21st century masculinity – “these things boys do!” – that the poems properly begin to cohere around solid and graspable themes. It’s a peculiar kind of masculinity, performing a high wire triple act. There’s the quiet desperation and yearning of ineffectual, half-formed and spent masculinity contained in poems like ‘Joystick Valhalla’ and ‘Matchstick Empire’. ‘In Doom Loop’ the narrator is:

bored of striking angular poses that I can’t hold
how the hope and change thing never works out,

Then it concerns itself with ambiguity and contrasts when it verges on the swaggering that characterises contemporary young men in ‘We are Premier League’ (“We’ve parked the bus and we want more”) and ‘Bantz’, the post-millennial, TOWIE influenced way to refer to the word ‘banter’. To be clear, the poet is taking an eviscerating tool to the posturing that hides behind the supposed humour of banter and in so doing, reveals it for the vapidity that it is. That braggadocio continues in ‘Making a cheese soufflé rise’ when advertising tycoon:

David Ogilvy is swashbuckling opposite me,
wreathed in the blue smoke of his success.

as he persuades the young man before him that with advertising:

You are the messenger of a good thing,

whatever your Frankfurt School says, a thing called progress,
a worthy thing for any man who calls himself a man.

The contemplation of manhood approaches an uncommon tenderness in the short and affecting love poems like ‘Writ’ and ‘What night is’ scattered throughout the collection. And of course there’s lust too – ‘Licking stamps’, the only poem written from a female point of view, will ensure that you never think of posting a letter in quite the same way again.

However, it’s when the poet writes in the first person voice that the poems are at their most authentic and powerful. There is an abstraction to some of the poems written from points of view other than the first person that give the impression that the poet is just skimming the surface of things. A cynic might suggest that there’s something a little bit showy about these poems with their knowing wordplay and arcane references and that they are in danger of becoming echo chambers of themselves. Conversely, there are poems that read as if they haven’t been excavated enough. It can be no coincidence that the most affecting poems, for this reader at least, are the ones where the poet seems to be writing honestly and bravely from a source of uncomfortable but deep feeling. They tend to be the ones written in the first person voice that also evoke a sense of place like ‘From Stavanger’ and ’22 March, Working in an Office on Berners Street.’

The title poem ‘Ticker-tape’ is also poetry of place, an exhaustive paean to London, in fact, that considers what it means to be a denizen of this city from every conceivable angle. It is obviously the backbone around which the collection is built and splits the book into two distinct halves. If the first half is more personal, the second half takes a more political stance, attempting to take a measure of the state of the nation and tackle bête noires such as racism, islamophobia, diversity, what it means to be British. The poet employs bold, wry and ingenuous methods to elucidate and make poetry of these themes but the problem is a lot of the poems in this section don’t seem quite cooked enough. Others are rather on the nose. The closest the poet gets to an unequivocally personal take on these issues is in the short, epigrammatic poem ‘The problem of becoming English:

wasn’t, as I was supposing,
of whether the ethnicity
would accept my race;
but rather one of posing
in a top hat for publicity.

All of which ensures that the second section of the collection doesn’t wield as much heft as the first. That aside this is an effervescent debut that showcases a writer who combines breath of imagination with comic chops. I’m intrigued to see where he’ll turn to next.