The Song of Life by Usha Rungoo 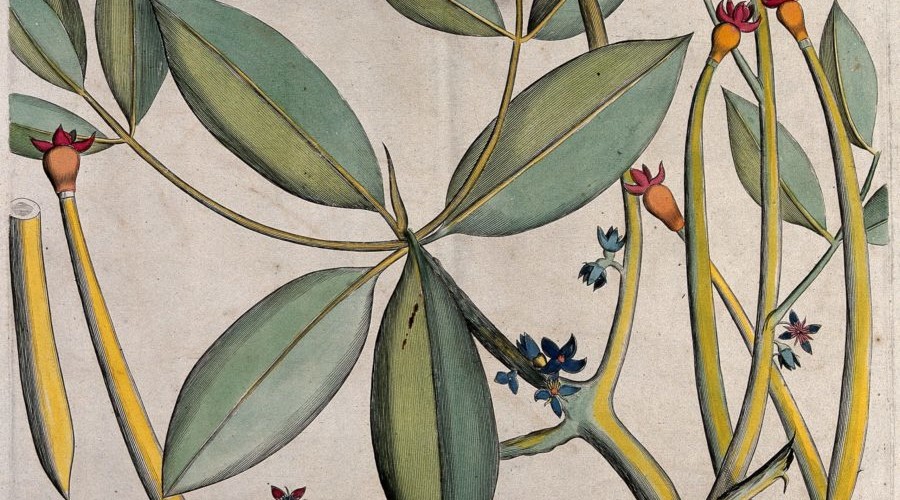 Wasafiri is proud to publish the shortlisted works of the 2021 Queen Mary Wasafiri New Writing Prize. These poems, life writing pieces, and short stories detail a range of emotions and experiences, produced by skilled new writers from all over the globe. In this life writing piece, Usha Rungoo writes about heritage and motherhood, interrogating the systemised racism that parents of colour are subjected to, and ultimately reaffirming the solace that generational and ancestral connections can provide.

One morning, I dream I’m immersed in salt water beneath the canopy of a cavernous, humid mangrove forest, swallowing me in, lulling me, as if a womb. My mother says morning dreams come true, provided you don’t share them. I keep the dream secret and hold it sacred.

Pregnancy arrives to me without surprise. I do prenatal yoga four times a week, drink plenty of milk, and eat just the right amount of salmon. I’ll do everything right, I think, with some vanity and much naïveté.

At four months, we visit baby stores. We don’t know the difference between a crib and a bassinet yet. We don’t know yet the sleepless nights and the days without a decent shower. We consider the snot-sucker with curiosity and mild disgust. Like tourists in a foreign country, we mostly look around politely and buy a few gadgets we will never use.

At five months, I imagine what he will look like. I wish for him his father’s curls. And I’m sure, for the rest, he will be like me: dark skin, big eyes, thick lips, and a round, flat nose. The nose cannot be escaped — I inherited it from my father, as did my sister and her own children. It is often made fun of in my mother’s family; the kind of fun meant to shame, particular to the cruelty of Mauritians, the peculiar cruelty of plantations. The nose I used to be ashamed of — Indian, of Bihar not Bollywood, of indentured servitude not skilled immigration.

At six months, I still step aside for others in public. A white pregnant woman is the Madonna, parting a sea of smiles in front of her, enjoying unraced motherhood. The rest of us, welfare queens with our anchor babies, claiming the country’s resources, killing the planet. And yet we are unable to claim as much space as whiteness does. A jogger almost runs into me. I hold my belly, as if protecting my unborn child.

At seven months, I walk around the gated Ivy League quadrangle where my husband and I have a faculty fellow suite. We live amid green ivy and stained glass and cathedral libraries. We live in the bubble of bubbles, we are told by friends. As I walk to our suite, I am stopped and asked what I’m doing here. She is less nice, less subtle than her colleague who had asked me a week ago. Between me and my husband, this is the fourth time. Another couple, faculty fellows like us, white unlike us, do not get stopped. A year later, my husband, with our baby on the stroller, will get stopped again, and asked again if he belongs. As my presence is questioned, I hold my belly, unable to speak; unable to protect my child who is not yet born and already does not belong.

A few months before I give birth, I take a childbirth class with my husband. When we take these classes, we are surrounded by white middle-class couples. In one of them, there is a lesbian couple and for the first time, all eyes are secretly on them instead of us. How early can I get an epidural, I ask the nurse-instructor. As early as you’d like, she says. I will forget this after thirty hours of labour.

It’s the middle of the night, I know he’s coming: my spine and my muscles knot and unknot in tandem with the intermittent pain. I had the choice between the hospital and midwives; an ultra-medicalised practice or a natural approach to childbirth. I chose the latter, not knowing I was trading one dogma for another. A day later, we drive to the birthing centre. I beg incoherently for relief, but the midwife tells me it’s too early for an epidural. She does not tell me it might be too early; the epidural can slow down contractions. She makes the decision for me. My brain foggy with pain, I nod. She is the authority, and I believe her. Later, I will read about the disparity in health care for women of colour, about the ways we are left with no control over our bodies, infantilised and dismissed. I dilate from four to nine centimetres within twenty minutes, from too early to too late for an epidural. Naked and terrified under the hospital gown, my legs up, lightning cutting through me, I still apologise to everyone in the room for everything.

From the start, the baby had been impatient, moving and moving, swimming in the womb for hours at a time. He arrives five days early, comes out of me with one hand on the cheek, as if in deep reflection, a Rodin in miniature. Impatient and tender, this is how he will be for the rest of his life; I know it. They pull him out and put him on me. The midwife-in-training stitches up my second-degree tear, a nurse shows me how to breastfeed. Exhausted, overwhelmed, but most of all I’m confused. He looks nothing like me. No dark skin. No round, flat nose. Nothing of me, of my family name that I insisted we hyphenate with my husband’s to give to him.

In the next few days, a dizzying, rotating slew of midwives, nurses and doctors come in and out, and in and out. The midwife who delivers my baby does not believe I should be teaching this semester. She tells me this in a country that mandates mere weeks of poorly paid maternity leave. The lactation consultant pushes me to exclusively breastfeed my child, dismissing my questions about bottle feeding and formula. She does this in a country that frowns at breastfeeding in public. In a few days, one pediatrician will respond to my husband when I speak to her. He does not have the right skin tone, but he does have the right accent and a baritone. I find myself attempting to casually insert into a conversation that excludes me that I am a college professor. I do this in a country that excises me from itself. In turn, I find myself excising other immigrants from myself, me from myself.

For the next few months, I tell the dizzying, rotating slew of pediatricians at the health centre that there is a problem. He vomits abnormally and cries constantly. Babies spit up, they tell me. All babies cry, they insist. I browse various parenting websites for hours, giving myself a crash course on his symptoms. I diagnose him on my own with colic, then reflux, then sensory processing disorder, then torticollis. Four months later, I think he might have an allergy to cow’s milk protein. I cut out dairy from my diet completely, and he’s a whole new baby. They never believed me.

(We name him to be remembered, a thundering three-syllabled name the next generation will pronounce correctly. His father, a Buddhist, tells me it means the interconnectedness of all things, words, and ideas. Like the fabric of life itself. My family tells me in folk Hinduism, it means maya: sorcery and enchantment. The world-as-conjuring. This shape-shifting name appeals to me. I have lived my life between languages, speaking similar shape-shifting words across them, as they negotiate nuances under my teeth and trade meanings through my lips. This nomadism of words appeals to me; the way they shed some skins and squeeze into others, adjusting slightly in meaning to bear another culture, to carry a different world. The name is an immigrant.)

Up until a few months ago, this new addition to our twosome still felt a bit strange. My kisses and coos all rang a bit hollow. His crib and diaper bag felt like add-ons to our familiarity. Until one day he’s asleep and his toys on the floor look like tender forlorn friends without him, and I smell his socks because I miss his marshmallow feet. Until one day, we return from the beach and he’s happy to be back home, because it’s his home too. Until one day, a verse comes to me, as if from an old cassette player, the memory interspersed with radio static, in the inimitable voice of Manna Dey.

When I was a child, my mother, my sister, and I sang to fill the house, a house of many things, of laughter and silence, of love and blows, but mostly a house of songs. This song of old now blooms under my tongue; a living, expanding memory in Proust’s teacup. The mother is the goddess Kali, the strength of Shiva, the mother is the goddess Durga, the voice of the Vedas, it goes. I then sang with a measure of solemnity, the goddess mother, unshakeable, fearsome, deserving of my veneration. Now it is the tender intimacy of the last verses that demands of me a quiet sort of reverence:

Taking the child on your lap

You sing the song of life

I am indeed not the Madonna, and neither am I Kali nor Durga. But I am a mother who sings. I sing, as I wrap myself around my baby, my body remembering the soft contours of my own mother’s lap. He looks up at me, his eyes ever-alert, ever-curious. He is a captive audience to my song in Hindi, as he is to my words in Creole, all languages he will repudiate and forget. But it’s okay, I tell myself. Across the many oceans and generations, tongues, stories, and songs travelled, adapted, and survived. And as he shifts between his many meanings, negotiates his different worlds, they will again, from the ancestors to him. We belong to each other when we don’t belong anywhere else. We create community out of exclusion, conjure memory out of loss, weave resilience in song. A genealogy of mangroves blooming in salt and mud.

I already see his ever-curious eyes losing their curiosity one day when I speak my country to him, guilty like all immigrant mothers. Already I see reflected in his ever-alert eyes,  a world I won’t live to see. But it’s okay, I tell myself. One day, he might sing too, his tongue a mangrove leaf and the veins a forest of condensed histories, latent memories. And his nose is already rounder, flatter than it was. 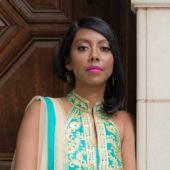 Usha Rungoo (she/her) is a Mauritian-American scholar, creative writer, teacher, and speaker, and is currently at work on a few academic and creative projects.