An Extract from ‘The Book Smuggler’ by Bina Shah 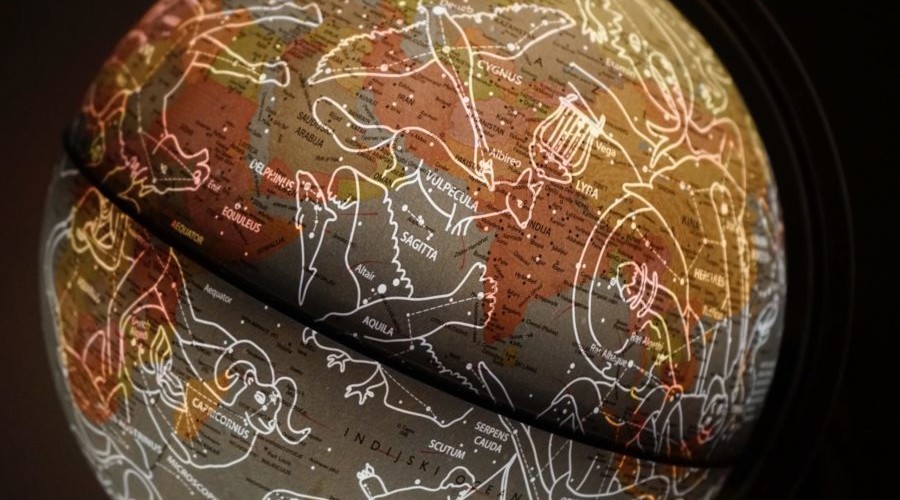 By Wasafiri Editor on January 10, 2022 in Fiction, extracts

Download the full text of ‘The Book Smuggler‘ for free until the end of January, or read it in Wasafiri 108: House of Wisdom

When I was a young boy, my grandfather taught me the difference between stars and planets. At first, he tried to explain to me that the stars did not move from their positions in the celestial sphere, but that the planets moved past the stars night after night.

When I didn’t understand, he said that the stars blinked on and off while each planet emitted a beam of unbroken light. I was still dumbfounded, so he pressed an old-fashioned telescope to my eye and told me to look carefully at two objects. Only one would twinkle; that was the star Mu Virginis (in Arabic, Rijl al Awwa, or ‘the foot of the barking dog’). The one that didn’t was the planet Venus (in Arabic, Al-Zuhara).

‘Do you see the difference now?’ he said.

‘I do, I do!’ I exclaimed, not seeing it at all, but wanting to please him.

‘Here, Grandfather,’ I said, offering him a shiny white flower from my pocket, one that had fallen from the tall tree in his garden. ‘You can have this instead. It looks like a star to me. See? It has five points. I don’t know its name in Arabic, though.’

He took it from my hand and smelled it, and ahhh’d with pleasure. ‘Thank you, Gulliver. The word for this is not in Arabic, but in Sanskrit: champa. You are my star, my night child. May I always be the moon that orbits your sun.’

But in those days, I was his satellite, and he was my centre of gravity.

My grandfather named me Gulliver Abhijeet Singh after a character in a children’s story about a man, Lemuel Gulliver, who travelled to far-off lands. My grandfather always wanted to travel, but his job and raising me after my parents died in a car accident did not permit him the freedom to do so. In naming me Gulliver, he hoped that I would journey in his place.

When I was twelve, I went to my grandfather in his book-lined study and demanded that he allow me to change my name. ‘I don’t want to be called Gulliver anymore, Grandfather. It’s too weird. The kids in my class call me Dirty Gully. They say that’s where you found me, because I wasn’t born like a normal person with a mother and father.’

My grandfather looked up from his computer, where he was preparing a lecture for his philosophy class at the University of Dubai. He examined my face closely, gauging the intensity of my anger so that he might calibrate his response appropriately. ‘Wherever Gulliver goes, he is always the same. It’s the other people he meets who think he doesn’t fit in. You have to be uniquely you, Gulliver. That is your destiny. No two stars in the sky are exactly the same.’

Destiny! Philosophy! Astronomy! Were these the only languages my grandfather knew how to speak?

‘Fine, Grandfather. Name me after a star. Or a planet. Call me Alpha Centauri Singh. Or Orion Cummerbund. But for God’s sake, please don’t make me be Gulliver any longer.’

My grandfather tried, unsuccessfully, to hide a smile. But he did not accede to my request for an official name change.

At eighteen, when I told my grandfather I was studying hospitality and intended to work on another planet some day, he took out his dog-eared copy of Critique of Pure Reason and thumbed through it to read out loud to me from Kant’s discussion of space and time. Kant believed that space and time were not real, but ideal: something that we fashion out of our own need for confirmation that we truly exist.

I stared at him blankly as he read this out loud to me. He looked up and caught my expression, ran a hand through his thin white hair and sighed.

‘I have to confess something to you, my boy. When you were a child, I told you the stars did not move and the planets did not twinkle. I thought you might not understand that we’re too far away from the stars to really see them move, even though they do. Or that the earth’s atmosphere can make even planets appear to twinkle. I thought that by teaching you a simple rule, you’d understand better, even if it wasn’t really the truth.’

‘Oh, Grandfather. It doesn’t matter. I don’t even understand any of that now.’

‘You’re not a child any longer, Gulliver. And when you go into space … you’ll be so far from me … You’ll have to make your own decisions about what rules to follow. Should I read to you what Wittgenstein said about the paradox of rules?’ It was a question that, alarmingly, almost ended in a sob. I couldn’t bear to see my grandfather, my centre of gravity, look as though he might be collapsing into his own black hole.

I came around to him and kissed him on the top of his head. ‘I’m a duffer, Grandfather. You know I don’t do well with your philosophy. I need it all in black and white. I need rules that don’t change. I won’t know who I am without them.’ And then I hugged him, hard, taking in the smell of the musty books behind him as if it were his own essence that I wanted to inhale.

I applied for an entry position in the Pan-Arab Space Travel Agency. The Agency had been formed in 2039 and by 2050 boasted several successful tours to Mars. My name weighed me down almost as much as gravity did on this planet. I could not squeeze all the letters of my legal name into the form fields, so I typed myself in as ‘G. Singh’.

My application passed the first round of scrutiny, and I was to present myself at the Space Agency on 1 July 2052 at 08:00: the first anniversary of the death of my grandfather, who had passed away quietly in his sleep, as quiet as the end of one of his books.

My interviewer brought up my name almost as soon as we’d finished shaking hands. ‘Gulliver,’ said the interviewer, reading from the device in his hand, then looking up at my face. ‘Is that a common Indian name?’

‘No,’ I said. ‘It isn’t. But the person who named me hoped I would travel far, just like Gulliver.’

‘You won’t be travelling for at least the next three years,’ he replied. ‘That’s how long the training takes. Only after you’ve completed the requisite programme will you be qualified as a Space Travel Agent.’

‘Perhaps we could skip some of the more basic elements of hospitality training,’ I responded. ‘As you can see from my transcripts and recommendations, I have excelled at some of the world’s finest hotels. The Five Seasons in Budapest, for example.’

‘What did you do there?’

‘I was the assistant to the night manager. During the Arab–Israeli peace talks, I sourced halal food for visiting Arab dignitaries and kosher food for the Israeli ones, even though Eastern European cuisine features almost nothing but pork.’

‘And look here, sir, the Mandarin Oriental in Hong Kong. I trained as a concierge. Believe me, nobody is more finicky than a Chinese grande dame from Hong Kong. If you can satisfy her whims, there is nothing you can’t achieve in hoteliery.’

The interviewer fell quiet for a moment, as if calculating how much time he could save in this interview. ‘Well, Gulliver, then let us see how you get on in space. You’ll train for six months, in our accelerated programme. If you do well, you’ll start as the assistant to the general manager at the Aurora.’

‘Six months? The Aurora?’ I said, hardly able to believe my ears.

Aurora Station was the lodestar for those of us who aspired to work in space. The world’s first luxury space hotel had opened in 2045, the flagship venture between the Pan-Arab Space Travel Agency and the Five Seasons hotel chain. In these seven short years, they had welcomed 10,000 guests, flown them at Low Earth Orbit to witness as many as sixteen sunsets in a day, and gathered every award that existed in the hotel industry.

Newer hotels offered a smorgasbord of galactic delicacies from which luxury travellers could sample freely — trips to see the rings of Saturn, attend or participate in the Lunar Games, a spa trip to the steamy Venusian atmosphere.

In comparison, the Aurora was what you might call old school. The quarters in the Aurora were spartan: only ten people could live in a space that was hardly larger than the cabins of a private jet. The luxury rooms were pods, the meals were space food, well known to provoke acid reflux, and the entertainment – space ping-pong, a zero-gravity gym, an ion spa – was minimal.

But anyone who had stayed at the Aurora had the satisfaction of knowing that he or she was part of a special cohort: like someone who had travelled on the Orient Express, or climbed Mount Everest. Aurora Station remained the terrain of the world’s discerning elite — and I wanted in at any cost.

The interviewer examined his device once more, checking his facts. ‘Yes, the current assistant manager was taken ill with space altitude sickness hardly a few weeks into his contract. A pity, since he did so well in all the simulations. We’ve been searching for a replacement, but nobody’s been quite … suitable. You, though, have potential. As long as … ’

‘As long as what, sir?’ I was quivering with excitement.

‘Just stick to the rules. No exceptions.’

‘Yes sir, thank you, sir,’ I said, fully confident that that at least was a part of the job at which I would excel.

Bina Shah is a Karachi-based author of five novels and two collections of short stories, including a feminist dystopia called Before She Sleeps, published in 2018. Her work has appeared in The New York Times and Pakistan’s biggest English-language newspaper, Dawn; the literary journal Granta; and other international newspapers and journals. In September 2020 Shah was awarded the rank of Chevalier in the Ordre des Arts et des Lettres for her work in the fields of literature, women’s empowerment and the promotion of the French language and culture in Pakistan.

Download the full text of ‘The Book Smuggler’ for free until the end of January, or purchase Wasafiri 108: House of Wisdom.

Photo by Vedrana Filipović on Unsplash