The Accusation: Forbidden Stories from Inside North Korea by Bandi – book review 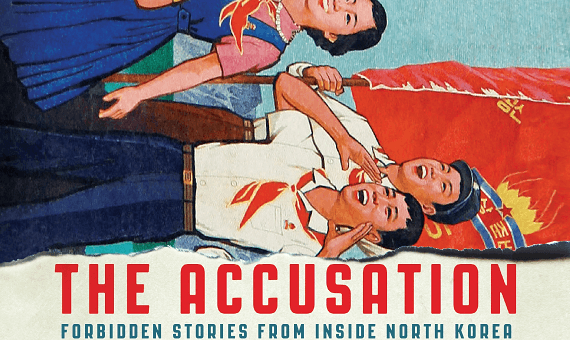 Prior to opening Bandi’s The Accusation, I was already filled with immense curiosity and presentiment, the weight of the author’s precarious position pressing heavily upon me. Written in North Korea between 1989 and 1995 during the Kim Il-sung era by a writer who draws from his perspective as a worker, the original handwritten manuscript is a vital artefact of the Republic’s hidden history. Unable to publish under his own name, Bandi is a pseudonym meaning ‘firefly’, which aptly symbolises both illumination and fragility; the act of revealing ordinary acts of life that are required by North Korean law to remain in darkness, puts the writer in a very dangerous position. Smuggled out of North Korea and into China, and subsequently published in South Korea, these seven stories are now available in English, a valuable and rare volume of samizdat literature that is both bitingly humorous and achingly tragic.

The tensions of North Korea’s political situation are transmitted onto every page of the volume. First-hand narratives, intimate diaries, and official declarations detail the ways in which ordinary life is controlled and transformed by the power of the Great Leader and his government. The theme of accusation runs throughout, leaving no household, no family, and no individual unexamined. In ‘City of Specters’, Pyongyang readies for the National Day celebrations, a marvel of organisational acumen that tallies with the publicly broadcast face of North Korea that is associated with lavish shows of military prowess and mass unity. Central protagonist Gyeong-hee, mother of a two-year old son, lives in an apartment facing Kim Il-sung Square, overlooking two huge portraits of Karl Marx and Kim Il-sung, and is accused of ‘neglecting to educate [her] son in the proper revolutionary principles’. In an exquisitely funny chain of episodes that unfold during the festival preparations, it is revealed that due to a rash threat made to keep her son quiet the boy has mistakenly conflated Marx, Kim Il-sung and the fairy tale monster Eobi, who comes for bad children. Every time he sees either of these giant portraits, there is a risk that he will cry out ‘Eobi’, be overheard, and thus reveal the supposed anti-Communist sentiment of his parents. The ridiculousness of the situation escalates as the mother adds contraband curtains to their apartment, which is in plain view at the epicentre of the celebrations, in an attempt to obscure the view of the portraits from the boy.

Similarly characters in other stories are punished or sent mad by the accusations levelled at them: failure to chop down a tree, share food, cultivate crops amidst unprecedented storms, sleep with persons high up in the Communist Party, travel with the correct papers, or weep uncontrollably at the death of the Great Leader all result in extreme penalties. As well as the black humour, which darkly satirises the whims and obsessions of the leadership to exert complete control and to never lose face, the stories are remarkable in their daring outpourings of emotion. In contrast to the regimented and obsequious mass that will turn on a traitor in seconds, each tale reveals the rich emotions, and the gutsy rebelliousness within individuals. The palpable tension generated under the conditions of the regime is exacerbated as the private grief, anger, and violence erupt in thrilling and heart wrenching ways. A man who has believed all his life that the elm tree outside his house symbolises hope and abundance for all his hard work, explodes in a rage, facing officials with an axe and flinging a glass ashtray at his wife. Insults are hurled, betrayal and cruel disappointment abound, real tears are shed and uncontrollable sobs verge on the hysterical.

The wittiest reflection on the performative aspect of North Korean life comes in the form of a young factory worker, Kyeong-hun, who has a very enlightened view of living without freedom. Accused of crimes against the Party – clowning around, drinking alcohol, and flirting  –  he defends himself, claiming that while working as a border sentry, his brain ‘had been rotted by the South Korean puppets’’ anti-Communist broadcasts that parrot ideas of ‘freedom’. However, it becomes clear in his defence statement that this worker is cleverly using the drills and stage rehearsals required of him as a member of the community to parody the system and use the idea of ‘stage truth’ to make his comrades laugh. The reader is left to unravel the layers of performance required of the townsfolk in order to fake ‘real’ emotion for the Party. Laughter is a also a key component in ‘Pandemonium’, where folklore provides the framing device for an encounter with Kim Il-sung that combines magic with oppression, in which a demon uses laughing magic on his slaves to conceal their pain. As well as theatre and marching drills, Bandi’s stories also ruminate on the role of journalism, propaganda, and food production within the Republic. The reader becomes enmeshed in the intricate twists and turns of the characters as they struggle to remain invisible and undetected in their fallibility. Some of these situations are truly nail-bitingly tense.

The volume as a whole presents a wide-ranging emotional and psychological portrait of North Korea over a time-span that is made to seem curiously modern. Not only do readers understand that the political situation is little changed in the twenty-first century, with one leader merely replaced by another male family member, but the way in which the perspective is shared is refreshingly nuanced. Gender roles and relations are more fluid, with traditional aspects of marriage, labour and domesticity pitted against the individual responsibilities of living inside the Republic. Class and power determine the patterns of sexual harassment, childcare, and privilege in non-expected ways for a Western reader. Ideas are focalised through first person, third person, epistolary, and para-textual narrative segments. Bandi’s energetic and whip-smart prose nudges into the cracks and corners that may be seeing light in English for the first time.

As the volume’s afterword attests, Bandi took dangerous steps to ensure that the sheaves of worn paper bearing the imprint of these affective stories reached a wider audience. But a great part of the impact also rests with translator Deborah Smith, who ensures that culturally specific terms pertaining to naming, hierarchical order, food, rituals, and weather retain detail without forsaking dynamic, suggestive energies. I was left feeling cold, frostbitten and chafed by the elements and the lack of warmth, and raw from the cumulative affect generated in these tales of struggle and epic sacrifice. In the twenty-first century, we can readily read what Kim Jong-il thought about cinema, consume news from the region filtered through layers and layers of spin, worry about North Korea’s nuclear agenda, and wonder at how and why North Korean athletes will attend the Winter Olympic Games held in South Korea in 2018. Bandi’s wonderful stories create the underworld from which this is all possible. They tell of ordinary yet extraordinary people, who, above everything can laugh for real.

Felicity Gee is lecturer in World Cinema at the University of Exeter. She is the author of the forthcoming monograph Magic Realism: The Avant-Garde in Exile (Routledge, 2018), and has published on Luis Buñuel, Surrealism and avant-garde film, Japanese and Korean film, and affect theory. Most recently, she was awarded a British Academy grant to conduct archival research in Cuba, on the interdisciplinary work of Alejo Carpentier. Felicity’s research straddles film, art history and literary studies, and her current projects investigate the collaborative work of modernist writers and artists that takes place across and between media.