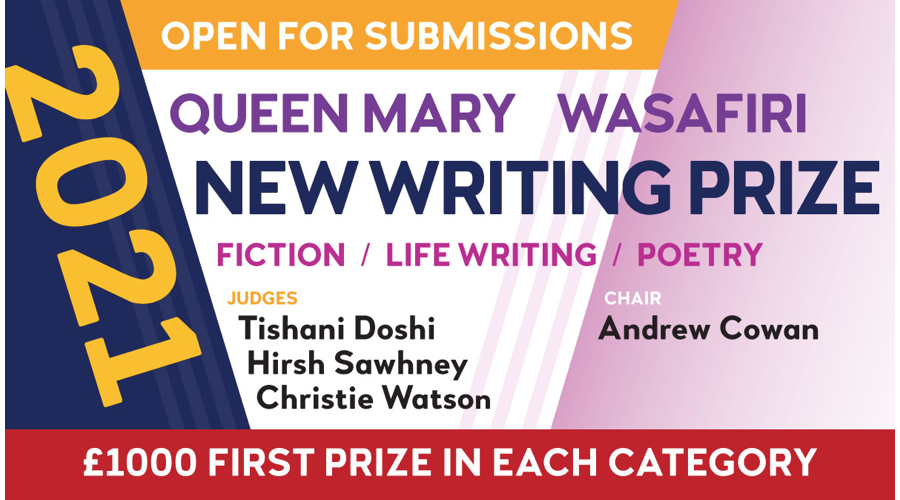 By Wasafiri Editor on February 1, 2021 in Articles

Representing more of the globe than any other prize of its kind, the Queen Mary Wasafiri New Writing Prize is opening its doors for 2021 and welcoming work in fiction, poetry, and life writing from unpublished writers around the world. The prize will remain open from 1 February to 31 May 2021.

Winners of the prize will be announced on 14 October and will receive £1,000 each to support their work. All fifteen shortlisted writers will be offered mentoring and career guidance from partners The Literary Consultancy and The Good Literary Agency. All winners of the prize, running since 2009, remain part of the Wasafiri community, and are supported by the magazine as their careers grow. Past winners and shortlistees have gone on to score deals with major international publishing houses such as Verso, Peepal Tree Press, and HarperCollins India and to be shortlisted for and win prizes including the TS Eliot Prize, Ambit Short Fiction, and Bocas Poetry Prize, among very many others.

This year’s multiply-award-winning international judging panel comprises Tishani Doshi (Poetry), Hirsh Sawhney (Fiction), and Christie Watson (Life Writing). It will be chaired by renowned novelist and Professor of Creative Writing Andrew Cowan, who says of this role, ‘I’m thrilled to be chairing the judging for this year’s Queen Mary Wasafiri New Writing Prize. I’m looking forward to working with Tishani, Hirsh, and Christie, who are such wonderful writers. It’ll be a real pleasure, and a genuine honour.’

Read the full T&Cs and submit your work.

Andrew Cowan is a novelist and Professor of Creative Writing at the University of East Anglia and has taught creative writing all over the world. His first novel  Pig  was published in 1994 and received multiple national awards. Including a Betty Trask Award and the Sunday Times Young Writer of the Year Award. It was followed by much-celebrated novels  Common Ground  (1996), Crustaceans (2000), What I Know  (2005), and Worthless Men  (2013), and Your Fault (2019). He has also written a creative writing guidebook, The Art of Writing Fiction, and he is currently completing the monograph Against Creative Writing.

Tishani  Doshi is Welsh-Gujarati  poet, novelist, and dancer. Her most recent books are Girls Are Coming Out of the Woods, shortlisted for the Ted Hughes Poetry Award, and a novel, Small Days and Nights, shortlisted for the RSL Ondaatje Prize and a New York Times Bestsellers Editor’s Choice. A God at the Door (Bloodaxe Books), her fourth collection of poems, is forthcoming in spring 2021. She lives in Tamil Nadu, India.

Hirsh Sawhney’s writing has appeared in international anthologies and periodicals including the Times Literary Supplement, The New York Times Book Review, The Guardian, the Indian Express, the Financial Times, Outlook, and many more. His novel South Haven was nominated for the 2017 DSC Prize for South Asian Literature, and he is the editor of the fiction anthology Delhi Noir. He currently lives in New Haven, Connecticut and teaches at Wesleyan University.

Christie Watson is an award-winning and bestselling writer of fiction and non-fiction. She has been a nurse for over twenty years and is currently Professor of Medical and Health Humanities at UEA. Her work has been translated into twenty-three languages.