Syncretic Spaces: On Wendy Nanan by Olga U Herrera 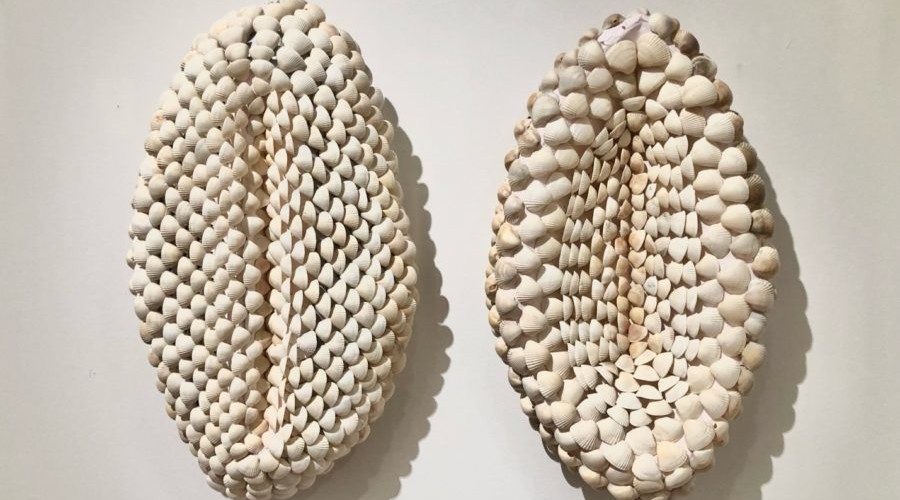 In this visual essay, including exclusive photos, Olga U Herrera explores the work of Wendy Nanan, and her dedication to capturing the nuances of her own life and the world around her. From Trinidad to Manchester, Nanan has continued to create work that pushes boundaries, and pays homage to the formative experiences as a Trinidadian woman that govern her practice. She is a seminal figure in Caribbean contemporary art history.

Wasafiri 110: Afterlives of Indenture interrogates the lives and experiences of indentured workers, and the legacies that their communities still carry. It is now available for purchase or download.

In the last two years, some of the most outstanding and iconic artworks by Trinidadian artist Wendy Nanan (b. 1955) have been circulating in various exhibitions across the United States. Amongst them are the traveling show Cultural Encounters: Art of Asian Diasporas in the Caribbean, organized by Adriana Ospina; the mid-career retrospective at the Art Museum of the Americas in Washington, DC; and Everything Slackens in a Wreck at the Ford Foundation Gallery in New York, (the last two curated by Andil Gosine). Nanan, at age sixty-three, has found a new, enthusiastic audience — and for good reason.

In an artistic practice spanning over forty years, Wendy Nanan has explored the meanings of home/place, Indo-Caribbean cultural and post-indenture identity, religious syncretism and symbolism, decolonisation and postcolonialism, and everyday global Caribbean existence. With a penchant for sculptural pieces in papier-mâché and oil paint – a technique and medium she has perfected – her art demands that viewers intimately engage with her recording of history, culture, and the complex legacy and challenges of a post-colonial contemporaneity.

Known for her precisely-built sculptural forms, one of her early artworks, Persona (1984), becomes a great introduction to the contours of her artistic vision. A highly personal and autobiographical artwork, it comprises seven moments of Nanan’s life in a middle-class Trinidadian Indian family, with its own business and social mores and expectations. The first of these moments is Birth, which she references in art historical terms by the Venus of Willendorf, inspired by Sandro Botticelli’s painting Birth of Venus. As we witness her childhood and adolescent years, the artist renders herself attending Sunday school at Greyfriars/St. Ann’s Presbyterian Church while practicing Hindu rituals at home, as well as her school years at the Anglican all-girls Bishop Anstey High School in Port of Spain. There, she encountered the UK-trained art teacher Judith Laird, leading her to discover a lifelong passion for art. Family summer vacations in Manzanilla Beach through her teenage years are evoked as a happy memory of endless sandy days, while bright water is contrasted with her experience as a young adult abroad. Shrouded in a new landscape of bleak, gray, snowy winters, Nanan references her attendance at the Manchester Polytechnic and later the Wolverhampton Polytechnic, where she received her BFA. Next, Nanan is depicted embedded in the 1970s disco club scene and fashion, dancing the night away in golden trousers, before her return home to Trinidad, where as a UK-trained professional artist, she again faced the challenge of fitting in and belonging as a woman of Indian heritage. 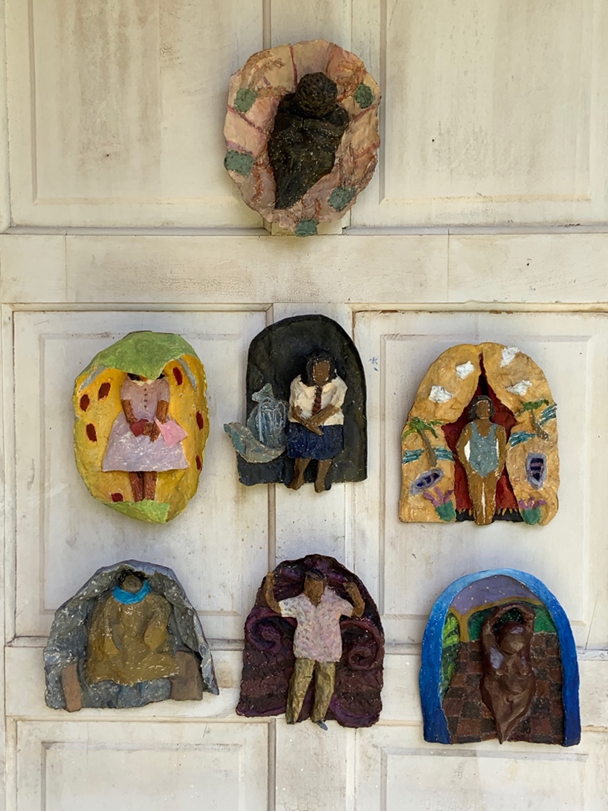 Nanan’s exploration of religious syncretism is exemplified in Idyllic Marriage (1990), an artwork that received critical attention when first exhibited, and launched her into the national art scene in Port of Spain, resulting in a solo exhibition at the National Museum and Art Gallery. With its clean lines and expressive figures, the sculpture represents an Indo-Trinidadian aesthetic, depicting a shared pantheon of Catholic and Hindu divinities. La Divina Pastora (Virgin Mary) and the Hindu god Vishnu, positioned side by side in full regalia, enter marriage under a hybrid structure featuring a Catholic church steeple and a Hindu temple’s symbolic dome. The piece references the history of Indian indentured workers in the Caribbean, and also Nanan’s coming-of-age in a polytheistic space, attending Christian schools while practicing Hindu rites with her family. 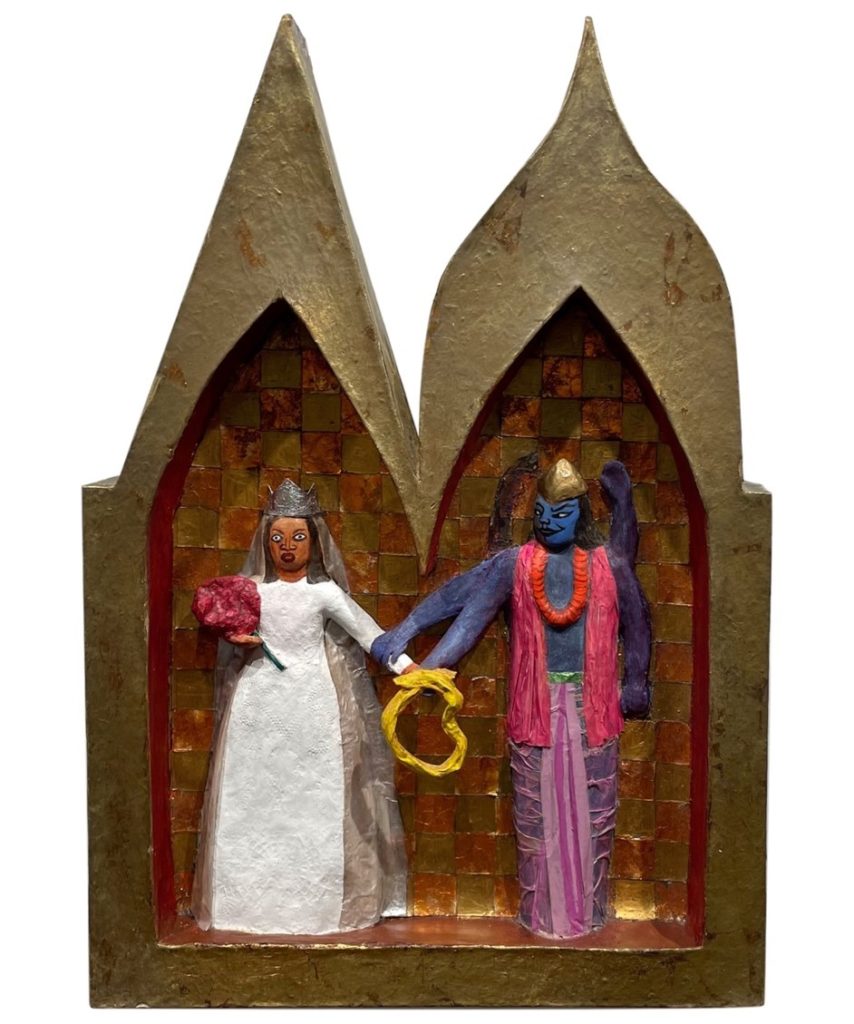 One of Nanan’s notable open oversized books, The Bounce (2012), also engages religious syncretism, but includes the first lines of the anti-lynching poem ‘Strange Fruit‘ — written in 1937 by U.S. poet and social activist Abel Meeropol, and later made famous by Billie Holiday as a song. Set against a blue celestial background, the Golden Lion of the Twelve Tribes and the Hindu god Ganesh touch as two dominant forces of spirituality and religion. The lines ‘Southern trees bear a strange fruit/Blood on the leaves and blood at the root’ are inscribed at the top of the page, as Ganesh metaphorically pulls the page back to reveal the historical violence in the American South and the Caribbean. The artwork links Nanan to a broader history of slavery and African American culture, with the title referencing the famous bounce between Barack and Michelle Obama on election night. 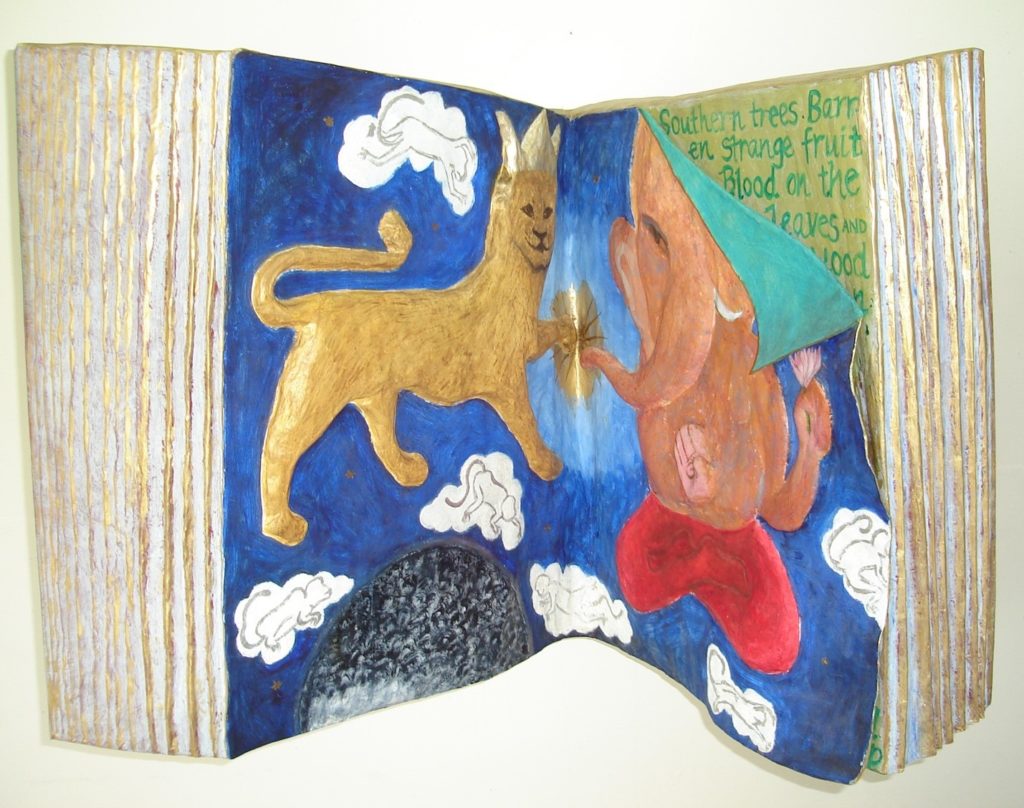 A more recent engagement with the iconographies of Hinduism and Christianism comes together in The Baby Krishna (2020), an electric god with blue pigmented skin, red lips, a halo, cherubic wings, and scales of justice tattooed on the arms. The rainbow baby that Krishna holds in his hands can be perceived as a symbol of the creolization of African, Asian, European, and Caribbean cultures, but also as the acceptance of queer pride. 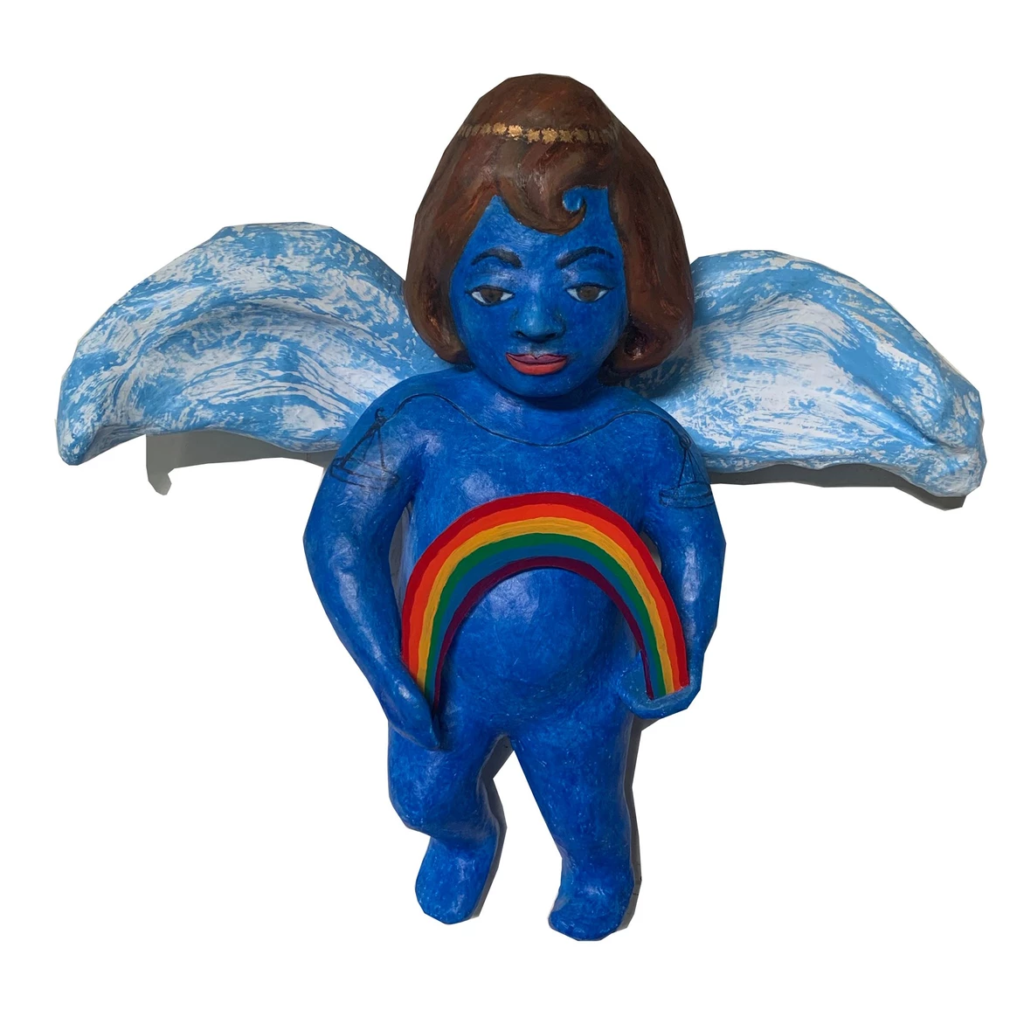 Nanan’s gaze extends further than religious symbolism, however. In Cricket Drawings, an astounding series of thirty-nine ink drawings executed between 1984 and 2011, the artist renders the physicality of the sport using the simplicity of calligraphic gestures, incorporating the bold expressiveness of Japanese Zenga — what Nanan calls a meditation and release of control. She captures the essence of cricket, the players’ demeanor, and atmosphere, in primary lines and curves. Her initial drawings in the series were created as a student in Wolverhampton, responding to ugly racism and the inhabiting the derogatory state of ‘the other’ by challenging and reclaiming her identity and self: ‘I’m West Indian, we are the very best!’ At the time, the West Indies cricket team was at the top of its game, defeating the UK team on their own field in a string of victories termed ‘the Blackwash’. In Trinidad, Nanan often attended cricket games at the Queen’s Park Oval with her parents, who were avid fans. Over thirty years, the series recalls the centrality of the sport in her life and West Indian culture at large. 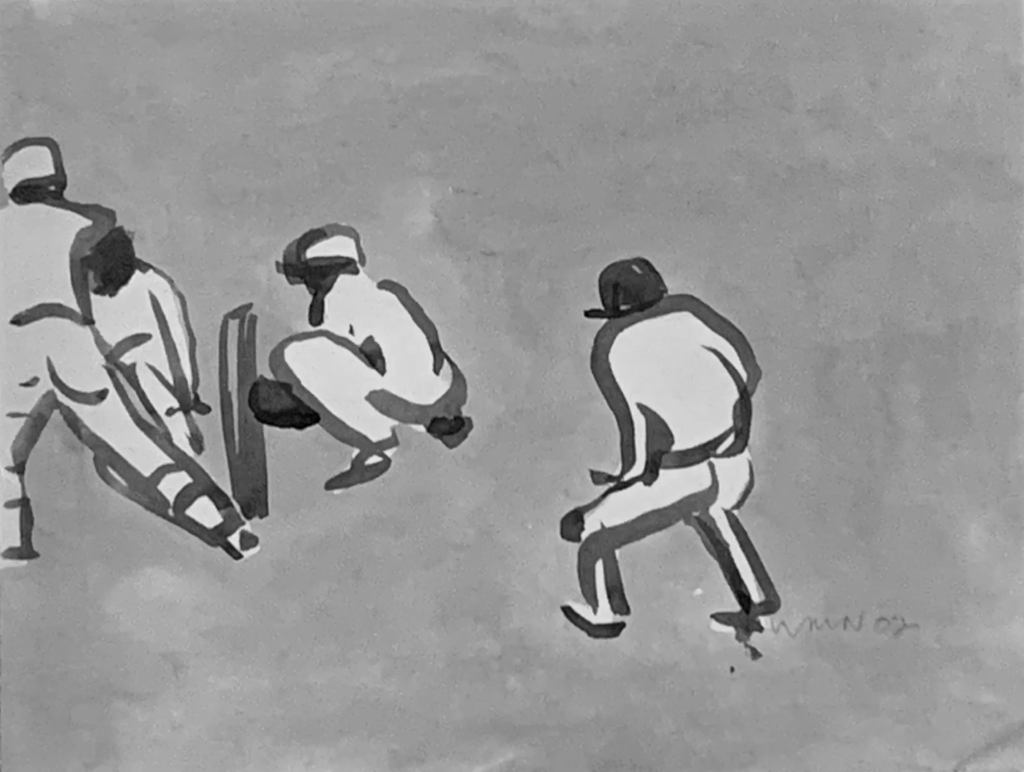 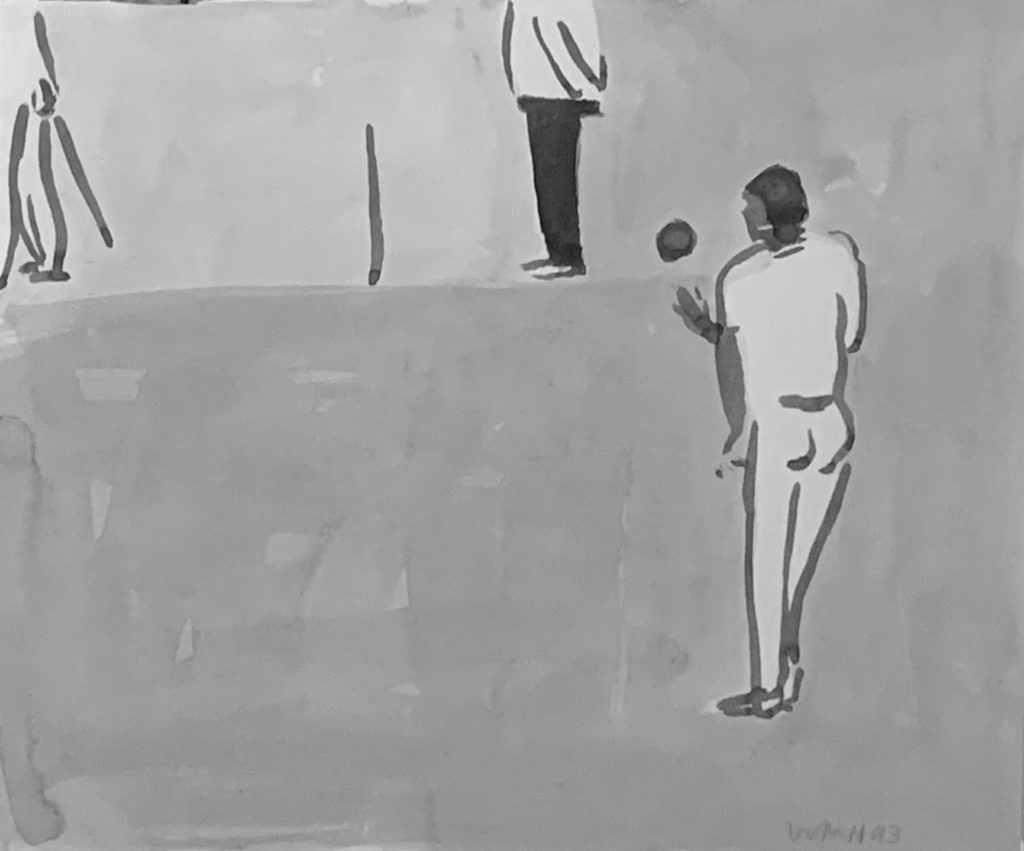 Recent artworks continue to trace connections between Nanan herself, and larger sociocultural issues, as she experiments with her practice and craft. Her latest sculpture, Breath (2020), engages exercises of meditation and deep calming, which she learned from a British Buddhist monk. Eight pods made of wire and papier-mâché, painted with silver oil and covered with rows of Trinidadian clamshells, are arranged in four sets of two. The viewer is invited to breathe in and out, and to contemplate and consider each piece in its totality. Breath was inspired by a nature documentary on clams in the sand, as they tried to breathe and survive. A video accompanies the installation with the same title, directed by Andil Gosine, capturing the voice of the artist as she recalls moments of her life and the artistic process of creation. The act of conscious breathing is at the centre of meditation and relaxation, but Breath also carries a double meaning in the age of the Covid-19 pandemic and the Black Lives Matter movement. The piece recalls not only the millions of deaths due to respiratory infections – where Black communities remain disproportionately affected – and George Floyd’s last words: ‘I can’t breathe.’

It’s that kind of complex, subtle meaning which has rendered Wendy Nanan’s work so popular and relevant today; her ability to draw upon her own experiences and create something larger out of them. The long overdue artistic visibility positions her as one of the most significant contemporary artists in the Americas, and one who will continue to innovate, translating the ever-shifting world around her into a sculpture, a painting, or a wide-open book. 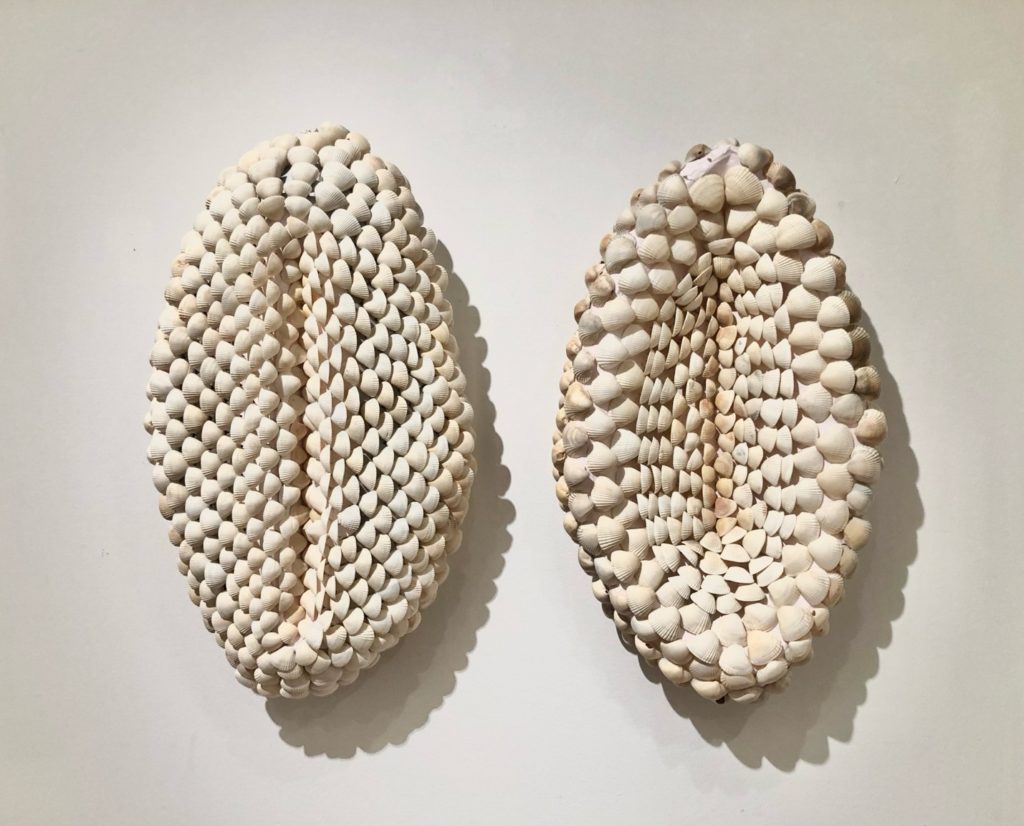 Olga U. Herrera is an art historian and independent curator. She is currently managing director of the Crossing Latinidades Humanities Research Initiative at the University of Illinois at Chicago. 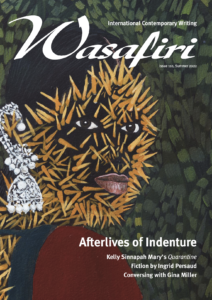