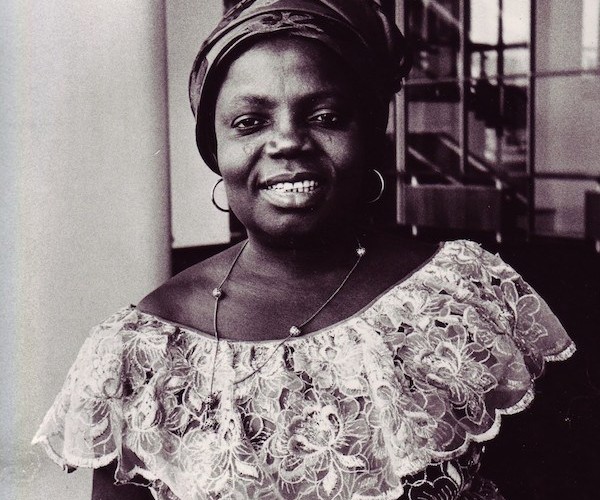 Buchi Emecheta was a phenomenon, as an immigrant, a writer and a black single-mother surviving in the hostile conditions of London in the 60s and onwards. When, in 1981, I went to interview her at her home in north London, she had five children and had published five novels, so when she opened the door I was surprised at how young she was: to have achieved so much at thirty-seven! When, two years and three novels later, I interviewed her again, she was proud to tell me she had just been declared one of the Granta Best Young British Writers under forty (alongside Salman Rushdie and Martin Amis). The accolade marked her transformation, in less than twenty years, from the young (eighteen) Nigerian wife and mother who came to England to join her husband in 1962, to the self-assured professional woman who greeted me on her own door-step, and the writer now being claimed by her host country.

The story of this transformation was the subject of Buchi’s first two semi-fictional works, In the Ditch (1972) and Second-class Citizen (1974). She went on to publish three historical novels set in her home village of Ibuza in mid-west Nigeria. The Bride Price (1976), starting in the 1890s, is set in her grandmother’s life-time; The Slave Girl (1977), set in the 1920s and including references to the famous anti-taxation rebellion known as the Women’s War in 1929, is her mother’s story; and Joys of Motherhood (1979) is set in the 1940s, the period when Buchi’s age-cohort was born. Buchi said of these novels, based on oral storytelling remembered from her childhood, ‘I’d wanted to be a storyteller, because, as children in the evenings, they used to tell stories.’ She was not a stylist, nor was she interested in inventing new forms or breaking literary conventions (though in The Rape of Shavi (1983) she anticipated the current vogue for speculative fiction with a novel set in a futuristic imagined African country; and in Destination Biafra (1981) she wrote an action thriller with a female hero). It was her potential as a storyteller that was recognised by her publishers, Allison and Busby; along with the importance of the story she was telling.

To appreciate her significance context is necessary, both in terms of Nigerian women’s writing and Black British writing of the 1960s, and 70s. In Nigeria, while Amos Tutuola, Cyprian Ekwensi and Chinua Achebe had started to gain an international reputation from the 1950s, women like poet and short-story writer, Mabel Segun and novelist, Adaora Lily Ulasi were less visible because locally published. The first UK-published novel by a Nigerian woman, Efuru, by Flora Nwapa, appeared in 1966, followed by Idu in 1967.  In Britain, similarly, though the Windrush generation of post-war West Indian immigrants was notable for the many writers who became prominent in the decades following, there were at first no women of note, and no black women were being published. When Buchi began writing, therefore, there was no obvious tradition of either Nigerian (or African), or Black British, women’s writing into which she could insert herself. Even the African-American authors – Walker, Morrison, Shange et al – who later became so influential only started to appear in Britain in 1982. Buchi’s astonishing output – nine novels in the first ten years, two each in 1981 and 1983 – is testimony to her self-belief and the power of fiction to create, not only stories, but a life.

In the autobiographical Head Above Water, Buchi relates how her husband destroyed the manuscript of her first novel – The Bride Price. To today’s readers, accustomed to the glamorous reputation of a Chimamanda Adichie or a Sefi Atta,  such an act seems incomprehensible, but Buchi was not alone in facing the consequences of her temerity in daring to write. Kenyan Micere Mugo, Egyptian Nawal el Sadaawi and Ghanaian Ama Ata Aidoo all had stories to tell of critical condescension, censorship, even detention, of being forced to choose between marriage and writing, of being threatened and intimidated.  In 1985, Aidoo spoke of her ‘secret terror’ of masculinist reactions to her work, and in 1984, one male critic castigated Buchi for her ‘vague feminist ideals’ and ‘inordinate attention to portraying male characters in an unfavourable light’. Even the Black and Third World Book Fair of 1982 in London could only field two female poets out of a total of twenty at its International Poetry Reading, and the following year, five out of twenty-five.

In this environment, Buchi not only wrote, she supported her family by her writing, won prizes, and, in 1983, set up her own publishing house, Ogwugwu Afor. Yet, in those days of feminist activism, she refuted the label, calling herself a ‘feminist plus’, ‘because we (in Africa) have so many other problems’. She remained humble, straightforward and direct. When I asked her, in 1981, if London had changed since she had first arrived, she replied: ‘No, London hasn’t changed. It’s me who’s changed. I came here with nothing and I’ve sort of acquired a career and sort of made a success.’ Today’s generation of younger women writers might well envy that sort-of!