Skinning Up by Jacqueline Crooks 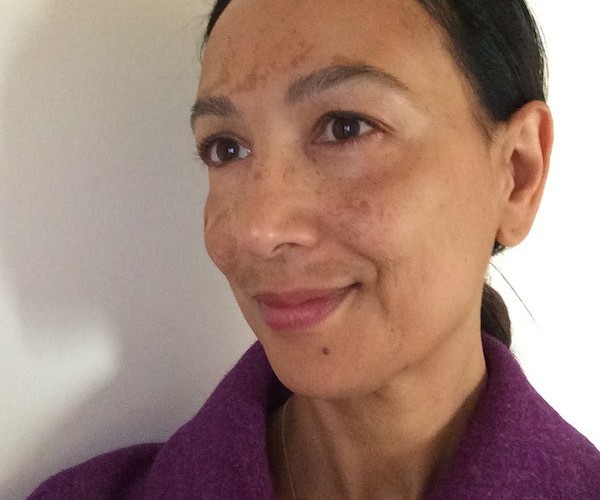 By Jacqueline Crooks on February 16, 2017 in Fiction

Riley stepped outside the shebeen. Steam was coming off her body. She pulled the grey rabbit-skin jacket around her. Her brown face was bloodless, leeched by the airless underground club.

Five o’clock in the morning and she’d had enough of the dub and skanking.

“Where yuh goin?” someone from a group of men called out. “The party ain’t done.”

The men were squinched together like quabs. Their silk shirts opened way down on their chests, like the cold was nuthn’, like it wasn’t biting their raas.

“Yeah, yeah,” Riley said as she waved away their laughter. She could hear them siss-i-sissing behind her as she walked away, but she didn’t business. If she didn’t step she wouldn’t get back before Tutus woke up and realised her younger sister had taken her fur. More importantly, Riley had to get home before Mumma who was working nights at the old people’s home at the back of the estate. Mumma didn’t know she was bustin’ out of the house at night, going to blues parties and dutty shebeens; but it was only a matter of time before she found out. Mumma was cunning like that.

Riley crossed the road to the minicab office.  She didn’t have any money – never did. No matter, it was just one long walk up the Cemetery Road – twenty minutes max. She walked past the minicab office – the last sign of life – and turned onto the long dark road that wound past the cemetery on one side, rundown houses and wasteland on the other. In fifteen minutes she would reach the patch of frowsy grass that tried to pass for a park.

She walked for five minutes.

The street lamps drip-fed bile-coloured light into the darkness. She felt like a stix-gyal in the fur jacket, badn’raas. Invincible. Not like that fool-fool Barry. He’d collected her that evening, driven her to the shebeen, promised to take her home.

Inside the club he pulled her to dance, winding and grinding against her, rubbing his sweaty face against her cheek. She shook him off. Left him rubbing-up with some ugly bug-eyed gyal. Chaa! She didn’t business bout his dry-arse self and his mash-up car. She just wanted to get home and climb into bed with Crimpey, her little brother. His curled-up body was always warm, sweat dotted around his scalp and down his spine.

She heard steps behind her. She stopped and turned. It was Glendon.

Six-foot four, slit-eyed Glendon who didn’t skin-up with women or men. Every now and then he pulled a gyal off the streets and into his car. If the gyal was lucky he released her within a day or two. With or without her baggy.

Every now and then he jooked-up a youth with his blade. Riley’s joints stiffened, but her brain was working hard. “Yeah, w’happen, Glendon. Yuh come to walk me home, eh?” Glendon kept slow-skip-skanking towards her.

“Looking out for me, Glendon, thanks,” Riley said. Her voice was turning speakey-spokey. Don’t lose it, she told herself. Play it real or you’re in trouble.

“What’s up, Baby,” Glendon said. “Where you goin’?” He stopped a little way behind her.

“Back to my yard,” Riley replied.

“Forget that. Come back to my yard; mek we have a likkle drink an’ t’ing. You know dem ways.”

“Nah, man – gotta step before my Mumma gets up.”

“Don’t carry on them ways, Babe.” The slitty eyes flickered in his long dark face.

“Know what, Glendon, I appreciate you walking me home like this. It’s kinda scary walking past the cemetery this time o’ night. Nevah know what’s going on back there.” She stopped walking. Glendon looked over the cemetery wall. He looked back at her, and Riley could see he was unsure. Yes! She’d dropped the image right inna his head.

“Big-big man like you ain’t scared of no duppies,” Riley said. “You’ve come to take care of me, make sure I get home safe, ain’t you. I check for that.”

He stroked his chin like he was thinking about something deep.

Riley wasn’t sure how long she could carry on the skank. Everybody knew that Glendon couldn’t read or write. His parents left him in Jamaica when they first came over. The people he’d been left with worked him like a mule and he never went to school.

She carried on walking and he followed.

“Come on, guess. Something every gyal wants.”

“It could be anything. Just tell me.” She was trying to keep her tone light, friendly. “Come nuh, man, what you doing walking behind me like that. How you gonna guard me if you ain’t by my side?” She didn’t like the way he was walking behind, like he was tracking her.

“A fur coat,” he said. “That’s what I got. Black mink. Know how much that thing cost? Couple grand. Gyal like you shouldn’t be wearing no rabbit. You betta dan dat.”

“Crisp? It’s more than crisp. It’s hanging in my cupboard, waiting for you.”

“Hold up nuh, Baby. Why you stepping so quick?”

He caught up with her, pulled her wrist so that she was facing him.

“I could come over next week,” Riley said. “I’m bleached, I don’t wanna come to your yard like this. I ain’t fresh.”

“I don’t check for freshness. I like things a likkle renk.” He put his arm across her shoulder. She could smell his sex, it clung to the back of her throat. She wanted to spit. But she swallowed it down.

“You’re fit, you know dat,” Glendon said. “You’re fit too, like a sprinter or something.”

“Not that kinda fit – gwaan like you don’t know what I’m talking bout,” Glendon said.

She had to try something else: “You believe in duppies?” Riley asked.

He splayed his fingers around the back of her neck like a brace. “I don’t believe in dem fuckries!”

Riley knew he believed in duppies. People who said they didn’t believe were just trying to protect themselves.

“My aunt Ermeldine is an obeah woman,” Riley said. “Big time obeah woman. She brought all her sorcery with her when she came to this country. Everyone else brought bangarang. She knew what she needed in this town.”

“Are you for real?” Glendon asked her.

Riley took hold of the arm that was around her shoulders and moved it away; she linked her arm through his. Wasn’t that how rich people linked and walked; people who lived good, knew how to behave.

She couldn’t out-run Glendon, she had to wrong-foot him. Skank him.

His arm stiffened. Her arms and legs were trembling. She looked at him from the corner of her eye. He had the same bush features as her grandfather Poppa-Landell: thick lips, wide nose, mallet-arms.

Glendon was like all the migrants from this slum town, living underground. Carving out their lives from darkness. But Poppa- Landell had used his strength to work his way up, to get to the surface. Glendon was lost, working his way deeper and deeper down.

Darkness was his territory.

Sweet him, she had to sweet him up. “Nice scarf, Glendon. Burberry?” “You know dat.”

“You always look crisp – you must be doin’ alright.”

“I’m not gonna bust my raas like my Mumma, cleaning shit for shillings. Cho! You gotta tek it.” He swiped the air, grabbed a fist of darkness and flung it into her face.

Riley flinched, steadied herself. “Your Mumma live round here?” Her voice was drying up.

“The only place you should be thinking about is my yard and that fur coat that’s waiting for you.” His tone was harder now. They were getting close to the turn off for Hunt Road, close to her house.

He wasn’t gonna let her go much further. She blinked, hoping that she would find herself back in her paraffin-heated bedroom. Why had Mumma come to this country? Why hadn’t she stayed in Roaring River, married some bush man who did nothing but dig up yams from the rusty earth.

A fur coat, to raas. Glendon was after her skin.

They came to the large wrought iron gate, the main entrance to the cemetery. The other entrance was on the northern side, close to the old people’s home where Mumma worked. Riley thought of her in the old people’s home, pulling sheets up to the chins of old white people with cracked, powdery faces.

“What the raas is that?” Glendon shouted.

Through the gates Riley saw a small figure moving through the cemetery, not walking on the path, but cutting inbetween the gravestones, the shorter route to the gate. Head down, moving quickly.

The figure came through the gate.

“Pickney, where yuh goin’ this time a de night?” it shouted. Glendon flexed his arms a little way from his sides.

“You t’ink I don’t know you been crawlin’ out at night like some dutty man?” the figure bawled.

Riley realised that Mumma had been taking the short cut home through the cemetery, even though she’d told them all never to go that way – day or night.

“I’m gonna bus’ you raas when I get yuh backside home, yuh hear,” her Mumma shouted.

Her Mumma was standing between her and Glendon as she grabbed a fistful of her rabbit fur collar and dragged her closer, without looking at Glendon.

Riley and her Mumma turned their backs on Glendon and began walking slowly towards Hunt Road.

‘Skinning Up’ is published in the Closure anthology published by Peepal Tree Press and reviewed in Wasafiri Issue 89, which is available from 28 February 2017.