Selma Dabbagh on A God in Every Stone 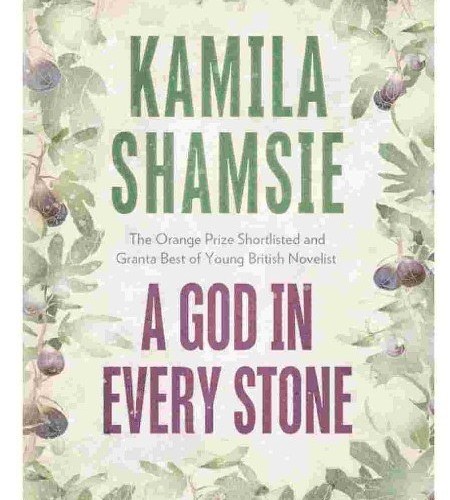 A God in Every Stone

‘You are reading Kamila?’ asks Baronessa Beatrice Monti della Corte in the garden of Santa Maddalena – her writing retreat in Tuscany. Yes – and yes, I was going to write something about it. ‘She wrote much of it here.’

‘There’s a dog in A God in Every Stone called Alice that was Beatrice’s dog,’ her assistant, Henry, adds.

‘Yes, look, there.’ And above my head is a plaque for the Baronessa’s pug who died in 2011 and was loved by all including the writer of the book I happened to be reading for review at the time. The world of writers is small. Santa Maddalena verges on the magical. The possibility of an honest review in these circumstances now daunts me.

I start my review:

Kamila Shamsie is one of a growing number of writers of non-Anglo Saxon origin who have branched out from their backgrounds (or, more loosely put in some cases, the source of their names) not just in their choice of language, but also in their choice of fictional terrain. Other examples of diverse settings are Kazuo Ishiguro’s English stately homes (Remains of the Day, 1989), Monica Ali’s Portugal (Alentejo Blue, 2006) and Aminatta Forna’s Croatia (The Hired Man, 2013). This is a trend, to this writer’s mind, that should be encouraged. It is hoped that those of us with odd nomenclature, mixed origins and experiences can be taken seriously for their views of the world at large, rather than being seen solely as ‘authentic voices’ for their place of origin.

At dinner, the Baronessa tells me that I should read regular guest Michael Ondaatje’s Lectio Magistralis, ‘Mongrel Art’ (July 2012). In it, in more elegant prose than I can muster (it is part of the process of the retreat to be daunted by the greatness of previous writer guests, but then with relish to discover in the writings left behind that they have suffered from such doubts themselves), he reiterates much of what I had written or thought, focusing on writers who are in a way mongrelised by race or place or circumstance. He writes, ‘So as writers we are influenced not just by where we grew up, and by place and race and culture, but also by the genres and forms of art around us.’

Kamila Shamsie is from Pakistan, lives in London and writes in English. A God in Every Stone, her sixth novel, is set between Turkey, India, France and England. Her previous work has been set as far afield as Japan (Burnt Shadows). The novel is set in two main periods: 1914/15 shifting forward to 1928/30. Told in the third person, there are two main protagonists, Qayyum Gul, a Pathan officer who served in Ypres, and a female archaeologist, Vivian Rose Spencer. The novel charts their individual evolutions and revolutions against colonial regimes and patriarchal expectations in a rapidly changing world, where continents divide, powerful empires are challenged and fallen empires re-excavated.

Shamsie is a masterful plotter and a thorough researcher, who knows her factual terrain well, while using her research assiduously; she is able to restrict the material she draws on. She is also able to create, in the characters of both Tahsin Bey and Qayyum Gull, attractive male heroes that match the will and verve of Vivian Rose. The landscape and references to Herodotus and archaeology are reminiscent of Michael Ondatjee’s English Patient; the discoveries of the ancient past and the anti-colonial rebellions of the more recent present brought to mind Ahdaf Soueif’s Map of Love.

Dominant trends in contemporary fiction, which some would ascribe to the creative writing industry, have set a fashion for pared down language stripped of adjectives and adverbs, a limited number of characters and a restricted viewpoint. Shamsie is not afraid to depart from this trend and, although her style may not be to the taste of all readers, hers is the assured voice of a storyteller, weaving her characters through an intricate plot full of colour and action. It is a voice that can be heard telling the reader the feelings and motivations of characters and spelling out their joy or despair. On occasion, it would have been desirable for the pace of events to slow, for the characters to be better grounded in their settings, so that the sentiments could be felt by the reader, the bearings of place more clearly obtained.

There is a jaunty wit to Shamsie’s observations of cultures looking at each other with admiration and disdain that runs throughout the novel, an example being a sentence like this: ‘Quyyum raised the buttered bread to his nose, the scent of it a confirmation that Allah himself loved the French more than the Pashtuns.’ Or Quyyam on a French platform singing in Pashto: ‘There’s a boy across the river / With a bottom like a peach / But alas! I cannot swim.’ This to the approval of the French men and women present: ‘the woman rested both elbows on the back of a bench and leaned forward, looking straight at Qayyum. Magnifique, she echoed.’ There is also some pleasing metaphor: ‘He thought of the snake he’d once seen shedding its skin. ”Shedding” wasn’t the right word. It simply seemed to glide forward along a pebbled pathway, leaving behind a layer of scales. As though the skin it had lived in was nothing more than a sock.’

The particular, peculiar politics of Indian soldiers serving in the British army presents a complicated and mainly unseen history through the eyes of Quyyum. The alternating admiration and distrust of the British public towards these ‘colonials’ is handled sympathetically in the Brighton hospital scenes as well as during the second period of time when Quyyum returns to Lahore. The novel also provides commentary on another struggle, the role of women – both in England with references to the Suffragette movement and the changes brought about by the First World War, and in India/Pakistan with the attempt by women to engage in national struggles (in this case epitomised by a literal leap by a woman from a window onto an army of men below).

Kamila Shamsie’s novel should be celebrated for its vibrant revelation of forgotten histories through a multiplicity of viewpoints.