‘We are louder when we are heard together’: Sara Ahmed on Complaint! 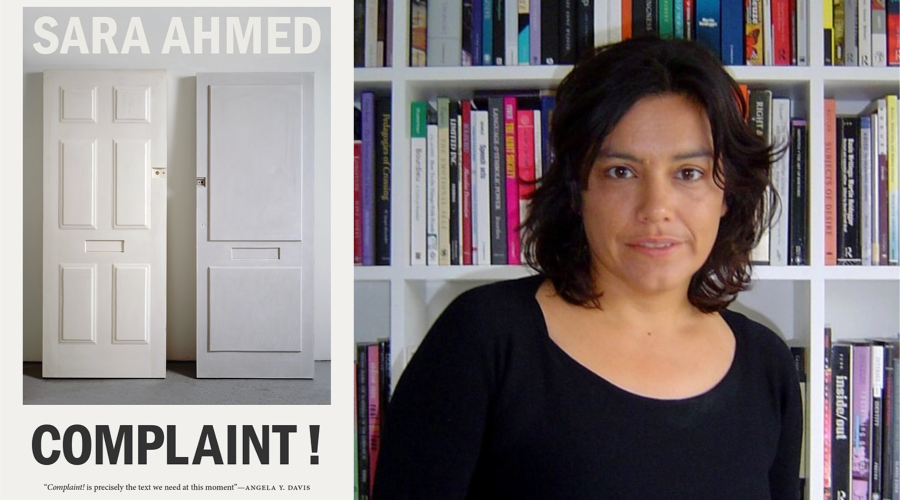 By Wasafiri Editor on May 2, 2022 in Interviews, extracts

In this exclusive extract from Wasafiri 109, Adrija Dey interviews Sara Ahmed, discussing Ahmed’s experience of writing her book Complaint!, and the larger process of gathering testimonies, being a ‘feminist ear’, and working to advocate for others and oneself from an intersectional perspective.

You can read the full excerpt in Wasafiri 109, now available to download or purchase online.

Sara Ahmed is a feminist writer and independent scholar. She works at the intersection of feminist, queer, and race studies. Ahmed is the author of books including What’s the Use?, Living a Feminist Life (2017), and most recently Complaint!, which was published by Duke University Press in 2021, when this interview was conducted. Complaint! draws on testimonies from academics and students who have made complaints against universities, examining how complaints work and who they work for. It considers the kind of collective work that might make institutional change possible.

This interview is a conversation of loss and hope. It’s also a conversation about sharing lessons and experiences; we speak about institutional mechanisms, theirfailure, accountability, and collective solidarity. It is also a reminder that we are not alone and we rise, roar, and rage together. The process of both reading the book and conducting this interview have been hugely validating. It has given me hope and reminded me that it’s not always about winning. It is about, as Sara said,‘what we gain and learn along the way’.

Adrija Dey: Firstly, I want to say congratulations on the publication of Complaint! Thank you for creating a space where our stories of struggle and solidarity have found a home; a space where the voices of survivors are centred — a voice that is so often unheard and lost in the darkness of hollow institutions or locked away in cabinets, files, and behind doors (as you write in the book). Thank you for creating a complaint collective. And finally, thank you for being a killjoy and inspiring us to be the same. I could relate to every page of the book, every complaint, the experiences of every survivor. I am part of a campaign called Account for This, which was started by a group of survivors of sexual violence within higher education who were institutionally stopped from filing a complaint. The campaign was about demanding justice but equally about demanding an overhaul of institutional mechanisms and introducing new policy structures and procedures which were survivor-centred, feminist, and inclusive. So I read this book not only as an academic but also someone with shared experiences. You started this book a long time back but you must have had to do a lot of work on it during the pandemic. How was your experience of writing about trauma and hurt in times which were so traumatic? So I wanted to start by checking in. How are you doing?

Sara Ahmed: One of the things I love about doing our feminist work is how we take care of each other, check in with each other. So, thank you for your kind feminist question! I did finish Complaint! at a time of mass trauma and loss. I have no doubt that the affective reality of our times is in the book, how could it not be? To write in some situations we need to let them in. I wrote this book with a sense of urgency and responsibility. In the introduction I write that I did not want to become a filing cabinet; we have too many of them already. I did not want the stories that had been shared with me before the pandemic to sit with me, to pile up, during it. I wanted, I needed, to get them out, to give these stories of complaint, these complaints, somewhere to go. Writing this book was thus very orientating. It gave me a focus, a rather fierce focus at that. I had a sense of a point and a purpose. But it became painful and hard when I sent the book in. I felt its absence deeply. Sometimes, we keep busy in order not to process some stuff. And then you have to process some stuff!

It is so hard to listen, absorb, and then write about these experiences though. I was wondering, what kind of structures did you have in place to take care of your physical and mental health during these times? This would be a very important lesson for people like us who work in this space as well.

I think there is a clue to how I took care of myself in my answer to your first question. It was hard to listen to these stories, but listening to them also gave me so much; energy, direction, and more. I listened to them and I learnt from them. I felt part of a collective in receiving them. One thing that really strikes me now, looking back, was how I felt a sense of connection to those I spoke to — a fighting connection. I realised through listening to others who complained or tried to complain that the point of fighting is not always evident from the outcome of a complaint, to the extent there is a simple or even obvious outcome. In fighting against something, we find other people, we become a collective.

How did you position yourself while you were speaking to survivors and then writing this book. Could you tell us a bit more about the feminist ear?

When I began supporting students at the university where I worked, I realised how it mattered to have someone that would listen. It matters more to be heard the more you are not heard. Being a feminist ear is how you say something. You are sending a message to someone that says, you can bring your complaint to me. I thought of my action in the research as turning my feminist ear out, to others outside my world and institution. I didn’t explicitly position myself like that, of course. All I did was write on my website that I was doing this research. I had an email address for this project (complaintstudy@gmail.com), which is still active, so that people could get in touch. That can be enough, just to say, you can get in touch. To become a feminist ear is also about hearing complaints together, listening for resonances, learning from repetition, what keeps coming up.

I cannot agree with you more on this. Often the academics who would support us would be the most precarious members of staff, people of colour or queer folks. I have been reflecting a lot on your section on ‘blanking’ — how they drag things on, make you wait with the aim of tiring you out. This is so similar to what we call ‘ghosting’ in our private relationships. This is basically institutional ghosting. There is such alack of accountability and care. But at the same time these institutions are inherently sexist, patriarchal, queerphobic, casteist, and capitalist and how much accountability and in what form do we wish to have from them?

I think blanking is related to ghosting. There are so many ways you can be made to disappear. To complain is often to encounter your own disappearance. It can be uncanny. That blanking and ghosting can happen in interpersonal and institutional encounters has something to tell us. What happens when we are blanked in a complaint process is not unrelated to what happens elsewhere. This ‘not unrelated’ tells me something about wishes. When we wish for something else, we wish wherever we are, to be able to breathe, to have room to be, to do the work we need to do.

Adrija Dey is an academic and activist with the 1752 group. Her research is titled Sexual and Gender Based Violence (SGBV) in Indian Universities: A Study of Campus Life, Student Activism, an dInstitutional Responses. She has been a vocal campaigner against SGBV, and part of campaigns such as Account for This. She is also a political activist organising with anti-capitalist and anti-fascist groups from a feminist, internationalist, and intersectional ideological perspective.

Read the full excerpt in Wasafiri 109, now available to download or purchase online.