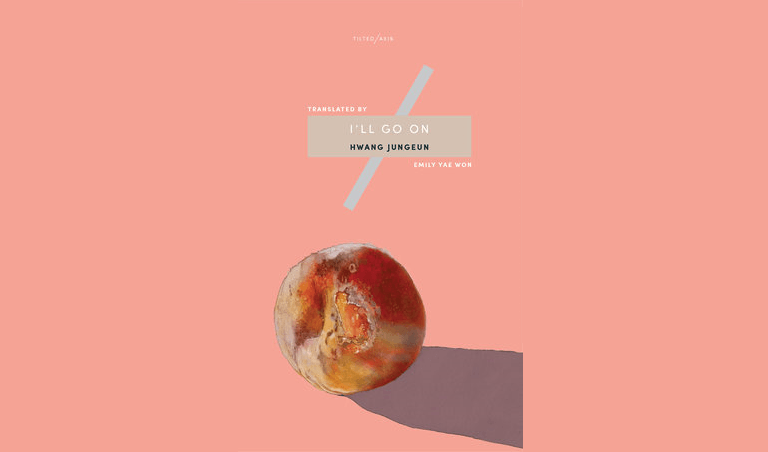 ‘People are trifling, their lives meagre and fleeting. But this, Nana, thinks, is also what makes them loveable.’

Nana is the central figure in a tightly woven triptych formed in childhood, completed by her older sister, Sora, and former neighbour Naghi. Hwang Jungeun’s I’ll Go On, is a portrait that blooms out of the composite images of their overlapping stories into three chapters, with Nana returning at the end to deliver a celestial, philosophical epilogue. It is Nana’s persistence, her recollections and stubborn introspection that give the novel its title, a phrase that frequently punctuates the narrative of her story, and which signals her belief in the value of continuance and resilience: we must ‘keep on’, we must cherish life. For Nana is pregnant, contemplating single motherhood, while her own fragile mother – destroyed by the death of Nana’s father in a shocking factory accident – fills a room full of tissue-paper flowers in a care home far away, unable to live in the ordinary world.

These contrastive states of hard and delicate, mournful and joyous moments establish the undulating rhythm of I’ll Go On. Its beauty and poignancy is rooted in Jungeun’s understated delivery of poetic realism and acutely observed mundanity. The first chapter, told by Sora in first and third person, introduces the reader to a series of ancestral disasters marked by floods, disfigurement and poverty. While Nana calmly ends episodes with ‘I’ll go on,’ Sora begins many of hers with ‘Listen’. Her taemong – premonitory dreams linked to motherhood – are what first reveal the possibility of Nana’s pregnancy, and her firm belief in this superstition encourages her to reflect on their shared history and its possible future. The novel brilliantly charts the sisters’ resentment and bitterness towards each other through darkly comedic events. Unni-ya – the Korean term for older sister – suggests an intimacy that Nana attempts, and fails, to withhold from Sora but in moments of danger or absentmindedness she voices the word against her will. Ultimately, the bonds of this sisterhood are too strong to ever be cast off, just as the sisters’ bond to Naghi Oraboni and his mother Sunja Najumoni, who once shared a house with them, is eternal.

In fact, intimacy provides the overarching framework for these stories, and not in an at all faintly sentimental manner. The intimacy is coupled with proximity, and is spatially imagined, underlining the harshness of conditions where families are thrown into ‘keeping on’ with very few resources. It is through Sora’s opening story that we learn of the house that Sora and Nana come to share with their mother, Aeja, and Naghi and his mother. The space is a subterranean ‘semi-basement,’ cool and smelling of fungi and kelp, divided into two habitations: ‘The dividing wall was the axis from which the two symmetrical spaces spread out like a butterfly’s wings.’ Evicted from their prior home after their father dies, the small girls explore this space with nocturnal curiosity, their observations frequently dwelling on the subject of the indeterminate realm between life and death. On their first night encounter with Naghi, Sora recalls that he cried out ‘Dokkebi’ as he mistakes them for supernatural beings. Dokebbi, or Dokkaebi, are believed in Korean folklore to be spiritual creatures that determine what can happen in the real world, and can be both a positive or negative force. This is how Naghi first perceives the sisters, but after a while the house is united: ‘A house some people might easily dismiss into non-existence purely because they can’t imagine it.’ The novel is punctuated with ghosts and spirits, of the living and the dead communing through jesa rituals to remember those already passed on the anniversary of their deaths.

The novel never veers far from its tight spatial configuration, with the three main characters occupying cramped, shared spaces navigated through tales of the past and present. It is a sensory experience, perfumed with home cooking, mingled with the sounds of damp footsteps peeling off floors or the ‘Whoosh, sshaa sshaa’ of blood vessels in Nana’s ultrasound; pellucid light, sweat, breath and dialogue intersect in weird, layered and repeated episodes. The main focus seems to me to be the extraordinary hardship of their shared past, but Jungeun subtly draws socio-political commentary into the stories by way of the novel’s emphasis on housing. Besides the cruel eviction that befalls the sisters and their mother, Sora works for the ironically named Good Construction redevelopment company, whose purpose to re-house the needy has been capitalised for gentrification purposes. Later, reflecting on her single-mother status, Nana worries about the stigmatisation of the lower classes, North Korean migrants, and what this might mean in her neighbourhood. Naghi’s mother returns to her father’s lonely grave once a year, accompanied by an armed soldier, as it is near the Military Demarcation Line. These are brief, but lasting reminders of the world outside the intimate life of these three characters.

I’ll Go On, quietly unsettles as much as it provides comfort and humour, and Emily Yae Won’s translation captures the sensory rhythm and vitality of these interlocked stories. The novel raises questions about the contemporary family, its heteronormative, conservative values, and its future. It delivers lessons on loyalty, empathy, and suffering while never tipping into the didactic or clichéd. It is wrought delicately from the gossamer moonlight that enters Nana’s final dream of the novel, yet leaves the reader with an impression of solidity and depth.

Felicity Gee is Lecturer in World Cinema at the University of Exeter. She is the author of the forthcoming monograph Magic Realism: The Avant-Garde in Exile (Routledge, 2019), and has published on Luis Buñuel, Surrealism and avant-garde film, Japanese and Korean film, and affect theory. Her research straddles film, art history and literary studies, and her current projects investigate the collaborative work of modernist writers and artists that takes place across and between media.