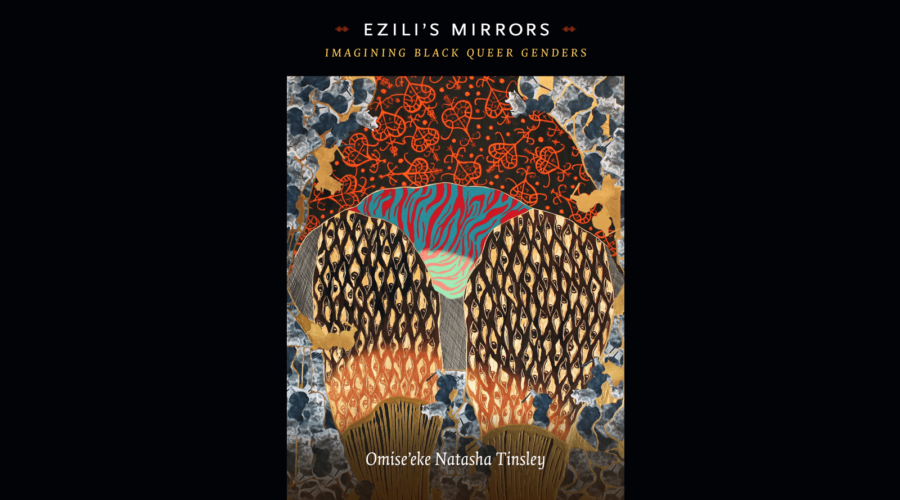 This article is published alongside the publication of Wasafiri Special Issue 98: Queer Worlds/Global Queer. Available to pre-order now.

My first encounter with Omise’eke Natasha Tinsley’s authorial voice remains a transcendental experience; it fundamentally changed how I related to my queerness, my blackness, my self. I was caressed and reshaped by her words, returned to waters of the Atlantic Ocean, where, she made me realise, I had never really left. It was within her article Black Atlantic, Queer Atlantic (GLQ, Duke Press, 2008), that seemingly disparate parts of me (me the diaspora child; Black like who? Black like me; not Queer as in theory but Queer as in my body tells me it’s so – this is what I know; me as in mine, me as in whole, me as in not your cargo) were synthesised. My tongue learned how to be my messenger because of Omise’eke. Because of her voice I remembered how to say my own name. I relearned how to connect in ways that this commodified flesh was never supposed to, to love my own kind when my kind was supposed to cease to exist. By her word I was reminded that I have survived.

Suffice to say, I was looking forward to diving into this book. I wanted to hear her again, to be reshaped once more. But this voice that had spoken so clearly to me in Black Atlantic, Queer Atlantic, this voice that had gathered my fragments and carried me whole, was not the voice I found. Whereas during our first meeting I was effortlessly enabled to reclaim the parts of myself left in the Middle Passage, Ezili’s Mirrors finds me utterly lost at sea.

Tinsley’s second book is a work that explores Haitian Vodou, but it is not a book about Vodou. It imagines black queer genders, but it is not a book that theorises gender per se. Ezili’s Mirrors does not fit comfortably in any one category. Though it has been filed under Black Queer Studies and Afro-Caribbean Literature, it feels perhaps more accurately to be about performance studies, and Tinsley herself admits to “experimenting with theoretical polyamory [which] opened possibilities for [her] to say things [she] couldn’t otherwise embody in academic prose” (p178). It reads like an exploration or meditation instead of a theorising; I don’t think this work has theory as it’s goal at all.

It is an intimate journey that requires much from whoever accepts the task. Readers are trusted to commit to the journey just as Tinsley has, to stay focused, committed, to travel the lengths of it all and to be present to whatever floats to the top. As we find out in the opening paragraphs, this book is not actually a book at all, but rather, a song. Perhaps my first mistake was to take this as a metaphor. It isn’t.

Across three distinct fonts, (imagined as the three voices, Beyoncé, Kelly and Michelle, in Tinsley’s favourite band Destiny’s Child), we are sung to. To search for clear meanings in these lyrics is perhaps to miss the melody completely. It’s the melody that lingers and resonates to the end, discordant, just out of reach, difficult to hum in ones own head. I’ve been trying to figure out why I feel so lost, and I think it’s because Tinsley is a little lost too. Ezili’s Mirrors is a song written in a time signature I am not used to, nor do I find it easy to follow. This time signature requires Tinsley’s reader-listeners to be at home in, and to be willingly led, by a temporal discordance that is black, queer and decolonial. But, it is also not prescriptive. Structurally it feels a little like Charlie Brooker’s Bandersnatch, or some sort of Griot tale in which any thread you pull will take you somewhere new. In Ezili’s Mirrors, time and narrative are not to be taken as linear.

Time distorts into a kind of cyclical experience, falling with, for, and over derivatives of itself, so that you have to complete the journey in order to make sense of it. This is what I mean when I say that Tinsley expects as much of her reader-listeners as she has given. It is with a kind of femme generosity, of labour, of emotional honesty, and of intellectual vulnerability, that we are offered Ezili’s Mirrors. This is a song led by desire and passion over structure; by gut and affectual constellations over argument and evidence, fabulously imperfect.

Which is not the piercing clarity of her earlier work, cited by many throughout Black Studies and taken up as a seminal work in Black Queer Studies. Ezili’s Mirrors is a song, a dance and a call and response. Her thoughts seem almost unfinished, a work in progress. Something that needs to be shared in order to become articulated.

Ezili’s Mirrors is a vulnerable and bold imagining; an invitation to work out the messy unravelling tapestry that is Black Queer genders in community, rather than offer a didactic truth to her seasick readers. If you are looking for definitive answers, Ezili’s Mirrors is not the book for you. But if you want to be lost at sea, to try to begin to make sense of your own melody, this book is the song you can’t quite get out of your head but can never recall the lyrics to; the song that infiltrates your dreams because it needs you to make sense of it, the song you require a community of your many selves to make sense of. “Let yourself fall under the sea […] and there you look at the Black Mermaid man lady with fishes and fishes and pearls and flowing down behind and realize that you are himher, you are that safe coral castle at the bottom of the ocean floor where you can take in what you need. […] You go down and you come up, you go down and you come up again, you go down and you come up from the underwater juke joint swampland public pool Black Atlantic Bristol Bay Aqua Star to a place where you can live” (p166).

Imani Robinson is a London-based writer, curator and live art practitioner. Since 2015 she has been a member of SYFU Collective, with whom she has co-curated exhibitions in Glasgow and London; programmed events, talks and workshops throughout the UK and Europe and developed her artistic, educational and facilitation practice. Imani is currently completing her MA in Forensic Architecture at Goldsmiths, UoL, exploring black geographies, prison abolition & drug policy reform using poetry, performance and critical race theory through her work. She is also a trustee of ONCA Gallery, Brighton.