A Red Glow in the Night  by Ann Field 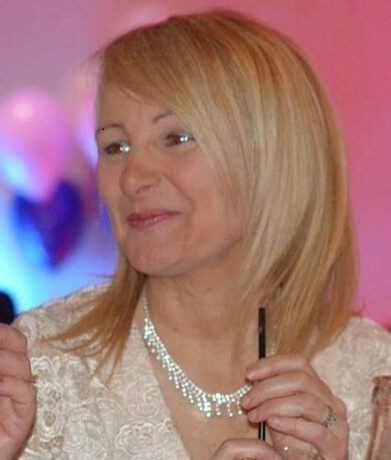 Ollie was just about to jump when he heard footsteps walking towards him across the stone bridge. Standing frozen on the wall, he never considered anyone approaching at this time of night. Ollie never moved and kept his eyes on the fast flowing water below while he waited for the person to pass. But the footsteps stopped just a few feet away. Snatching a quick glance, he saw the shape of a man fling up a trouser-suited leg and climb onto the wall and stand there. The man looked directly down at the river not four feet away from Ollie. The man said nothing and Ollie thought they must look very odd, as they both stood in the moonlight, so close they could have touched had they reached out. This was most unfair, he thought, as on an occasion such as this, he preferred to be alone.

He stole another glance and saw the new arrival was a broad built man of about fifty, give or take a year, so younger than himself. He wore a heavy dark coat with a thick woollen hat, pulled down to cover his ears. It was a frosty night in October and Ollie’s ears were freezing. He wished he had thought of bringing a hat himself and that coat looked as if it held onto the heat. Ollie was feeling the cold as it began to bite and he openly watched the man now, not caring if he appeared inquisitive. Hadn’t this stranger materialized without any consideration about intruding on Ollie’s well-planned preparations?

The man patted his coat and took a packet of cigarettes from his pocket. He searched deep until he produced a silver lighter catching a beam of moonlight as he rolled his thumb on to ignite it. On the second attempt, he caught the flame and inhaled hard as the tip turned to a bright red glow. He then blew smoke out through his nostrils like a dragon and snapped the lighter shut. The moon returned behind the cover of a cloud that slowly drifted across the stars.

Ollie could not believe the sheer neck of this outsider infringing on his territory nor his blasé indifference to his own presence on the wall. He had carefully chosen this bridge and certainly didn’t want to share it. This was the bridge where he learned to fish with his father, it was also where he had first kissed Kathleen, God rest her soul. Ollie was fuming as they both stood in the darkness with their backs to the dusty old road, closed off to traffic since the new by-pass opened last year. This man was ruining Ollie’s plans and he felt aggrieved because he had arrived first. His cheeks burned until he could no longer hold his tongue.

‘Could you not find your own bridge?’ he asked the man sharply, who did a sharp half-turn, seeing Ollie for the first time. He wobbled slightly before regaining his foothold on the uneven surface of the bridge wall.

‘Who are you?’ he asked in total surprise, as he squinted toward Ollie. ‘What are you doing here?’

Ollie thought that was a bit rich coming from the stranger. And it must be obvious to any sane man what he was doing standing on a brick wall overlooking a river in the middle of the night.

‘I might ask you the same question, Mr. Eh What’s your name? I don’t recall seeing you around here before.’ Ollie certainly was not about to give his name to someone he didn’t know.

The man finished his cigarette and flung the butt into the river. It twirled down to the water and they both leaned forward slightly and watched the red glow as it disappeared into the black water below.

‘It’s Charles.’ He spoke in a deep yet quiet voice. ‘Charles Mahon, I live about five miles outside the town. You wouldn’t recognise me, as I haven’t lived there very long. So how about yourself?’ He turned so that his face became fully visible in the returning moonlight. Ollie saw he had dark eyes and a white face, a very white face he thought.

‘Ollie McCarthy and I think you should go off and find another bridge for yourself. I got here first and I can’t go with you standing there looking at me.’

There he’d said it now and he waited for this Charles Mahon to get down off the wall and walk back across the bridge. Just leave him alone to complete his task.

‘Well, I could go in before you,’ suggested Charles after a little consideration, ‘but if you’d prefer to go first, I’ll turn away until I hear the splash.’

He held out the cigarette packet. ‘Would you like one before you go, Ollie?’

Stretching across, Ollie took one of the cigarettes out of the box and lit it, enjoying the warm flame from the lighter. He coughed a bit as he hadn’t smoked in years. Charles took the lighter back and lit one up himself.

‘You’re having another one?’ asked Ollie incredulously. He thought Charles would’ve left, especially now that he’d shared his feelings about wanting to be alone.

‘Oh, I intend to smoke them all. There’s no point leaving them behind. No one would want to smoke a dead man’s cigarettes.’

‘But… but then you will be here for ages.’ Ollie’s teeth chattered as he spoke. ‘Jeez, Charles, I’m freezing. I don’t have a hat and coat like you and standing here is making my legs stiff as planks.’

He stamped his feet against the uneven stonework, forcing the circulation back into them. At sixty-eight years old there was only so much blood left to reach his feet.

‘Sure the water will be ice-cold, so it doesn’t really matter if you’re freezing before you go in. As I said, I’ll go first if you like, but not before I finish these.’ He turned back and stared at the water below, lost in thought.

Charles going first did seem to be the best solution. Ollie’s legs were so numb from the cold that he decided to sit on the wall before he fell in. Wagging his feet, there was nothing else he could do only wait until Charles finished his smokes. Ollie couldn’t help wondering why he wanted to jump. Knowing his own reasons too well, he decided to bite the bullet and ask.

‘Why are you here yourself, Charles, if you don’t mind saying. I wouldn’t like you to think I was nosey but we’re going to be here for a while anyway.’

Ollie thought he might have over-stepped some boundary as Charles was taking a long time to answer. But after another long pull on his cigarette, he started to speak in his low voice and Ollie strained his ears to listen.

‘Well Ollie, I’ve nothing left. First my business went and then the car, quickly followed by my wife. They took away my house keys today.’ He sighed deeply before he went on. ‘I’m the developer who built that by-pass. It’s hard when you lose everything, you know?’

Ollie found this revelation a bit emotional and felt sorry for Charles who paused quite a while before he continued in his low voice. ‘Em, you want to say what your own situation is?’

Ollie tried to clear the lump in his throat with a small cough before he began telling his tale. He rubbed his arms to get some heat into them as his breath turned to vapour in the night air.

‘Well, I’m very down in myself Charles, can’t seem to shake it. Depressed, according to the doctors and all the tablets they give me are useless. I think it all began when my son James died two years ago and I’m finding it difficult to cope. I miss him something terrible.’ His voice quivered. ‘I can’t bear rattling around the house with no one to talk to. I’ve even started talking to myself.’ Ollie gave a harsh little laugh as he finished the cigarette down to the filter. He squashed it on down flat on a brick set into the wall, sending little sparks off into the dark. His teeth chattered and the smoke made his eyes water. He wiped his sleeve across his face and sniffed hard.

Carefully, Charles got down from the wall and stood on the disused road. He removed his heavy coat and placed it around Ollie’s shaking shoulders. ‘This’ll help with the shivering. You are going to catch your death, you know. That cardigan is not ideal for these chilly nights.’

As they stood leaning against the wall of the unused bridge, Charles said he could murder a cup of tea as his throat was burning from all the cigarettes.

‘Sure I’ve plenty of teabags at home.’ Ollie made the suggestion with some brightness in his voice at the thought of a hot drink. ‘There might even be some heat left in the fire,’ he added wistfully as they set off together. ‘And sure the kettle won’t take long to boil.’

They arrived at Ollie’s small house and it didn’t seem so empty with the extra big man inside. They sat and talked for a long time in front of the glowing embers of the fire drinking hot strong tea. Soon they realised how much they had in common. Charles gratefully accepted Ollie’s offer to use the spare room until he got back on his feet.

Ann Field hails from Leixlip, County Kildare, Ireland. Belonging to a Creative Writing Group, she has numerous stories published in magazines and shortlisted to read for Kildare Readers Festival in 2015. Along with writing, Ann enjoys painting and attends a reading group with a penchant for crime thrillers.