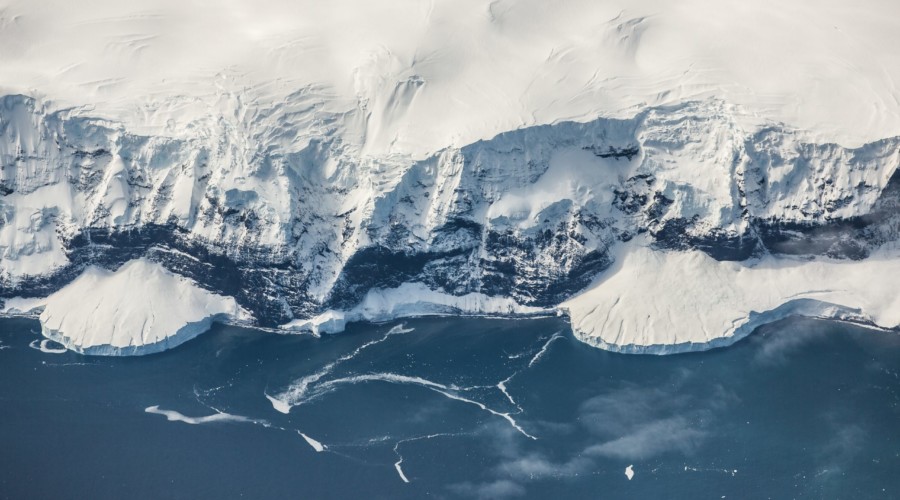 By Wasafiri Editor on June 1, 2021 in extracts, life writing

Isabel Hofmeyr and Charne Lavery, colleagues from the Oceanic Humanities for the Global South project based in Johannesburg, attended a conference of the Standing Committee on Humanities and Social Sciences (SC-HASS) of the international Scientific Committee on Antarctic Research (SCAR) in Ushuaia, Argentina, on 3-5 April 2019. Ushuaia is the main gateway city to Antarctica, and from there they took a ship to the closest part of the Antarctic continent, the Antarctic Peninsula, accompanied by Lucy Allais, Kantian philosopher, and Lauren Beukes, science-fiction author. In this jointly authored reflective essay, Hofmeyr and Lavery discuss their shared yet distinct experiences of the same ten-day cruise, focused on the experience, history, literature, indispensability and impossibility of reading in Antarctica. In the spirit of putting academic conventions at sea, Hofmeyr is Reader 1 and Lavery is Reader 2.

Not Reading in Antarctica

The instructions from the travel company were quite clear. The likelihood of sea seasickness was high and when seasick you cannot read. The cruise would be ten days long—what if I could not read for the entire period? Low panic set in until I remembered I could listen to books rather than read them and I duly acquired every piece of technology for playing audiobooks. As matters turned out, and armed with every available version of medication, I didn’t get seasick and could read as much print as I wanted. The episode however was a useful introduction to reading in Antarctica, where everything is governed by the elements. The elements determine when one can read, what, and how. If seasick, you must turn from print to audio. Even when not nauseous, and if the seas are a bit rough, you must lift your eyes from the page to glance at the horizon as a way of fending off mal-de-mer.

We received a ship’s log after we disembarked, which recorded the conditions on each day of our journey. The voyage out from the port in Ushuaia via the Beagle Channel and across the Drake Passage –  the narrowest point of the Southern Ocean – was unexpectedly calm. Day three of the voyage was recorded as ‘Wind: N 5; Sea State: Slight; Weather: Fog; Air Temp: +3 °C; Sea Temp: +2 °C’. The fog marked the line of the Antarctic Convergence, where cold Antarctic waters meet warmer South Atlantic currents, and in those first days the widely rolling sea seemed hardly ‘slight’. The return journey a few days later, however, reads as ‘Sea State: Rough’, and had us holding tight to our e-books which slid away down the bench if left unattended. The ship had in fact been forced to leave the peninsula early to try to circumvent a storm approaching from the west. The elements – air, water, their temperatures and pressures – were both determining for the shape of the voyage and intimately experienced at the level of eye to page.

Having taken to the audiobook in Antarctica, on my return I in fact listened to Moby-Dick followed by The Mill on the Floss. Coming from a relatively dry country, I couldn’t but be struck by the amount of water that one encounters in this and most other British novels. Water seems intrinsic to its design and form. This awareness of water was one of the after-effects of Antarctica, which turns one into a reader of elements and an elemental reader — reading, for instance, for water. This mode of reading is becoming influential: we now read for fog, atmosphere, air, and rain (Carroll; Engelmann; Hensley and Steer; Peters; Taylor). Antarctica is an excellent training-ground for this way of reading: it is a place built so starkly from the elements and one cannot but return as an elemental reader.

Reader 2: Seawatching, and the Perils of Reading

Before we left I started compiling a reading list, hoping to get much of it done on the long featureless days of sea travel like the ship passengers of times past. I read none of it. Unlike my cabinmate and coauthor, who spent half her days peacefully in the library, I spent most of mine rushing distractedly from window to deck, from side to side, watching the sea. The sea! So vast and full of life. I had a lighter version of the same impulse as Jonathan Franzen, who in a well-known essay on a similar Antarctic cruise, tries to prove himself the ‘hardest-core birder’, a figure who stands ‘all day in biting wind and salt spray, staring into fog or glare in the hope of glimpsing something unusual’. I’m no birder, but everything we saw was unusual to me. While Franzen in the characteristically grumpy essay lists the mundaneness of the tourist experience no matter where you are, he also stops in stunned wonder at the place itself: ‘I’d never before had the experience of beholding scenic beauty so dazzling that I couldn’t process it, couldn’t get it to register as something real’. What Franzen calls ‘seawatching’ took up all the space I had for reading.

I had other reasons too, humbler than the fear-of-missing-out on sightings. I am prone to motion sickness and, despite being far more heavily drugged than Reader 1, queasiness hovered, and much more closely when looking down at a page. This sense of slight hazard to the act of reading persisted throughout the trip and is perhaps why since returning I’ve been drawn to stories of the dangers of Antarctic reading.  One is a short story by Russian novelist Gary Shteyngart, ‘The Devil You Know’, which was commissioned for an episode of the radio show and podcast, This American Life. It is written as a series of diary entries by Sergey, a research engineer overwintering on a Russian Antarctic base, who measures his vodka in grams. On the base, he says, the only relief from boredom is a handful of politically sanctioned websites (for example IlovePutin.com) and a small library of books. But, ominously, ‘all is not well in that realm’. The engineer, from a working-class background and reading his way through the classics for the first time, is taken by the brilliance of Anna Karenina, Moby-Dick, Mrs Dalloway, and a translation of Philip Roth, The Complaint of Tovarich Partnoy. Before he can finish any of them, however, an educated and chatty welder named Oleg finds a way to drop hints revealing their endings. ‘“Oh, hello,” he says, “I’m Mrs Dalloway. I really should have married that fascinating Peter Walsh instead of boring, predictable Mr Dalloway. I wonder how my party will go tonight.”’ Eventually, one spoiler too many and 700g into the evening’s vodka, Sergey snaps and, shouting, ‘How’s that for an ending,’ stabs Oleg in the chest.

A full version of this article was originally published in Wasafiri 106: Water, guest edited by Stephanie Jones and Charne Lavery, which you can purchase here.