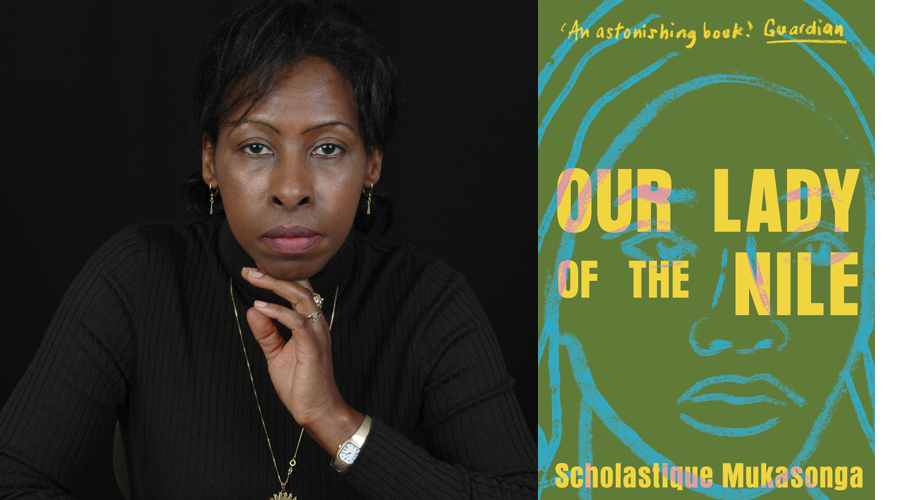 By Wasafiri Editor on February 23, 2021 in Fiction

There is no better lycée than Our Lady of the Nile. Nor is there any higher. Twenty-five hundred metres, the white teachers proudly proclaim. ‘Two thousand four hundred ninety-three metres,’ points out Sister Lydwine, our geography teacher. ‘We’re so close to heaven,’ whispers Mother Superior, clasping her hands together.

The school year coincides with the rainy season, so the lycée is often wrapped in clouds. Sometimes, not often, the sun peeks through and you can see as far as the big lake, that shiny blue puddle down in the valley.

It’s a girls’ lycée. The boys stay down in the capital. The reason for building the lycée so high up was to protect the girls, by keeping them far away from the temptations and evils of the big city. Good marriages await these young lycée ladies, you see. And they must be virgins when they wed – or at least not get pregnant beforehand. Staying a virgin is better, for marriage is a serious business. The lycée’s boarders are daughters of ministers, high-ranking army officers, businessmen, and rich merchants. Their daughters’ weddings are the stuff of politics, and the girls are proud of this – they know what they’re worth. Gone are the days when beauty was all that mattered. Their families will receive far more than cattle or the traditional jugs of beer for their dowry, they’ll get suitcases stuffed full of banknotes or a healthy account with the Banque Belgolaise in Nairobi or Brussels. Thanks to their daughters, these families will grow wealthy, the power of their clans will be strengthened, and the influence of their lineage will spread far and wide. The young ladies of Our Lady of the Nile know just how much they are worth.

The lycée is very close to the Nile, to its source, in fact. To get there, you follow a rocky trail along the ridgeline. It leads to a flat parking area for the few tourist Land Rovers venturing that far. A sign reads: source of the nile → 200 m. A steep path brings you to a heap of rocks where the rivulet spurts between two stones. The water pools in a cement basin, then dribbles over in a thin cascade and along a little channel, before disappearing down the grassy hillside into the tree ferns of the valley. To the right, a pyramid has been erected, bearing the inscription: source of the nile. cock mission, 1924. It’s not a very tall pyramid: the girls from the lycée can easily touch the broken tip – they say it brings good luck. Yet it’s not the pyramid that draws them to the source. They’re not here to explore; they’re on a pilgrimage. The statue of Our Lady of the Nile looms among the large rocks overhanging the spring. It’s not quite a grotto, although a sheet-metal shelter protects her from the elements. our lady of the nile, 1953, reads the engraved pedestal. It was Monsignor the Vicar Apostolic who decided to erect the statue, in order to consecrate the Nile to the Virgin Mary, despite the King of Belgium persuading the Sovereign Pontiff to consecrate the whole country to Christ the King.

Some people still remember the unveiling ceremony. Sister Kizito, the old, somewhat frail cook, was there that day. Every year she describes the occasion to the new pupils. ‘Oh, it was a beautiful ceremony, similar to those you see in church, in Kigali, at Christmas or in the stadium, on Rwanda’s National Day.

‘The King’s official representative sent an envoy, but the colonial administrator was there too, flanked by an escort of ten soldiers. One held a bugle, another carried the Belgian flag. Various chiefs and deputy chiefs were in attendance, along with those from neighbouring chiefdoms. They brought their wives and daughters, who wore their hair piled high and pinned with pearls, they brought their dancers, who shook their manes like valiant lions, and of course they brought their herds of long-horned inyambo cattle decked with flower garlands. The hillside was thronged with farmers. Naturally, the whites from the capital didn’t dare venture onto the rough path that led to the spring. But Monsieur de Fontenaille, the coffee planter who lived next door to the lycée, was there, sitting beside the administrator. It was the dry season. The sky was clear. No haze wreathed the mountain peaks.

‘We waited. Finally, a black line could be seen approaching on the ridge path, and a murmur of hymns and prayers arose. One by one they came into focus: Monsignor the Vicar Apostolic, with his mitre and crosier, looking like one of the Three Wise Men from the pictures they show in catechism class. The missionaries walked behind him: they wore pith helmets, as all the whites did back then, but were bearded and dressed in long white robes with a chunky rosary around their necks. Children from the Legion of Mary strewed the path with yellow petals. Then came the Virgin. Four seminary boys in shorts and white shirts carried her on a plaited-bamboo litter, the kind used to take a young bride to her new family or the dead to their final resting place. But it was impossible to see the Madonna because she was wrapped in a blue and white veil. Behind her jostled the “native clergy”, and then, preceded by their banner and the white and yellow papal flag, came the straggling line of catechism pupils, straying cheerfully off the path onto the slopes, despite the best efforts of the monitors with their sticks.

‘The procession reached the hollow and the spring; the Madonna’s palanquin was lowered beside the stream – she was still hidden beneath the veil. The administrator stepped forward and greeted Monsignor with a military salute, exchanging a few words while the rest of the procession took up position around the spring and the statue, which had been raised onto a little stage. The Bishop climbed the five steps with two missionaries, blessed the crowd, then turned to face the statue and recited an oration in Latin, with the two priests giving the response. Suddenly, with a nod and a wave from the Bishop, one of the acolytes unveiled the Madonna. The bugle sounded, the flag was dipped and a hushed murmur spread through the crowd. The hollow filled with the women’s sharp cries of joy and the jingling of the dancers’ ankle bells. The Virgin who appeared from beneath the veil certainly resembled Our Lady of Lourdes, who can be seen at the mission church dressed in the same blue veil, the same azure belt, the same yellow dress, but Our Lady of the Nile was black: her face was black, her hands were black, her feet were black. Our Lady of the Nile was a black woman, an African woman, a Rwandan woman – and indeed, why not? …

Our Lady of the Nile by Scholastique Mukasonga, translated by Melanie Mauthner, is published by Daunt Books on 18 March 2021.