On Walcott and Doig by Maria Cristina Fumagalli 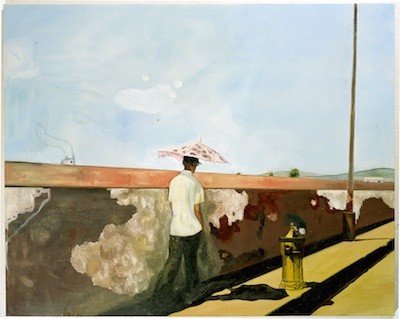 By Maria Cristina Fumagalli on January 2, 2017 in Articles

There was an old gardener in my village in Italy, about twenty-five years ago, who after his wife’s death, decided to go around wearing her necklaces and brooches. They had been together for more than sixty years and, as he once whispered to me in his deep, guttural dialect, this was his way to feel her close to his heart and to feel himself again. Someone should write about this, I remember thinking, someone who could pay homage to the deep humanity of this gesture, to the simple world it sprang from and to the authenticity of this love. After all these years, I had forgotten about old Michele but when I read ‘Lapeyrouse Wall’ by Derek Walcott and saw the painting by Peter Doig which appears next to it in Morning, Paramin (2016) — a new collection where Walcott’s words are put in a sustained dialogue with Doig’s work — it all came back to me. Finally, Michele’s spirit has posthumously found its perfect form(s).

In Doig’s Lapeyrouse Wall (2004) we see a man with a pink and white umbrella decorated with flowers who walks all alone along the Lapeyrouse wall which encircles the graveyard of Port of Spain. In Walcott’s poem the man is a bereaved widower who clutches his parasol while walking patiently, every day, along the perimeter of the cemetery: so close to death but still on the side of life, grounded in the here and now but perhaps also imagining (even longing) to be lifted by the wind and gently parachuted to the other side. For Walcott, this painting is ‘in dialect’: the man’s big shoes, his baseball hat, his big black glasses confirm Doig’s commitment to ordinary people and ordinary life, a commitment which is illuminated by his ability (shared by Walcott) to extrapolate arresting a ‘truth’ from a mundane scene (29). 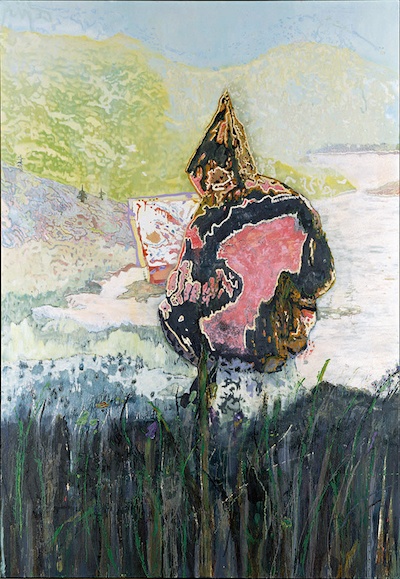 The Lapeyrouse Wall is one of the many Trinidadian landmarks evoked in a book which could be seen as a map of Doig’s and Walcott’s sensitivity to, and enthusiasm for the island, its culture, landscape and people. Despite not being natives of Trinidad, in fact, they have both developed a strong bond with it and a deep-felt sense of belonging. In the poem ‘A Lion is in the Streets III’, Walcott argues that Doig has earned the right to ‘belong’ because he paints Trinidadian ‘bareback’ streets –but, by extension, all Trinidadian subjects– with ‘a skill achieved by love and mental membership’ (99). ‘Mental membership’ requires a deliberate effort to become part of a landscape instead of simply being someone who depicts it from outside. In Figure in Mountain Landscape (1997-98), a painting based on a photograph of the Canadian painter Franklin Carmichael at work en plein air, Doig presents us precisely with an artist who becomes part of the (snowy) landscape he is painting as the landscape becomes part of him. As Doig celebrates Carmichael’s deep love for the Ontarian wilderness, the poem by Walcott that accompanies the painting and shares its title identifies Doig as someone who keeps a ‘double climate’ inside — his brush has whitened both ocean foam and snowfall — but, as Walcott forcefully puts elsewhere, who also truly ‘belongs’ in the ‘lowering green emptiness’ of Trinidad, in its ‘craziness,’ ‘its immense variety of racial choice’, ‘all of its languages’, ‘all its customs’, ‘its music’ (9, 85,49,85). 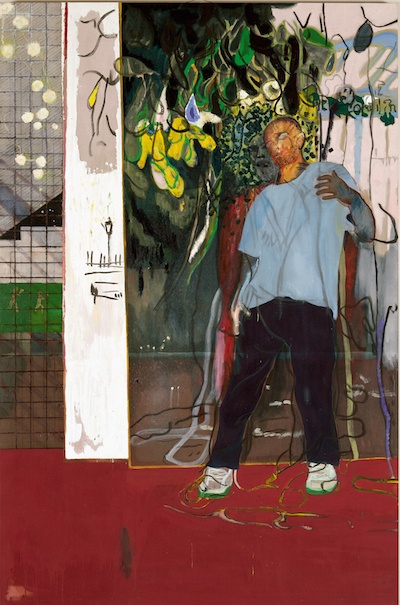 No foreign lands is the title of a recent exhibition by Doig (Scottish National Gallery, Edinburgh 3 August-3 November 2013) and in The Prodigal (2004) Walcott famously states that ‘if they asked/what country I was from I’d say, “The light/of that three-lined sunrise down the Via Veneto”’ (29). In Morning, Paramin Walcott seems to recognize Doig as a kindred spirit when, in ‘Night Studio’ (Studiofilm & Racquet Club) he asserts that the only authority that Doig obeys is ‘light’. The painting by Doig which gives Walcott’s poem its title, a 2015 self-portrait of the artist in his Port of Spain studio, in fact, can also be seen as another variation on the theme of cosmopolitanism. Here Doig superimposes his own figure on one of his own paintings, namely Stag (2002-2005): based on a black and white photograph of a clochard leaning on a pole, Stag relocates the Parisian scene firmly in Trinidad as the title, the name of a local beer, clearly suggests. As ‘real’ and painted people become indistinguishable, Doig’s superimposition of his portrait on the composite figure behind (the photographed Parisian clochard turned into a Port of Spain ‘drunkard’) also seems to question geographical and cultural distances whilst contemplating the translatability of experience. It is not surprising, therefore, that when, after reading ‘Lapeyrouse Wall,’ I told Michele’s story to Derek Walcott he smiled, delighted, but not at all astonished that I found Michele lurking behind the poem and the painting.
© Maria Cristina Fumagalli
Morning, Paramin is available from Faber & Faber. 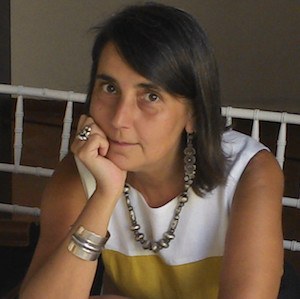 Maria Cristina Fumagalli is Professor in Literature at the University of Essex and she is currently the recipient of a Leverhulme Major Research Fellowship (2016-2019) to work on a new interdisciplinary monograph entitled Derek Walcott’s Painters which will focus on Walcott’s ongoing engagement with the visual arts.
She is the author of On the Edge: Writing the Border between Haiti and the Dominican Republic (Liverpool University Press, 2015), Caribbean Perspectives on Modernity: Returning Medusa’s Gaze (University of Virginia Press, 2009), The Flight of the Vernacular: Seamus Heaney, Derek Walcott and the Impress of Dante (Rodopi, 2001) and has published numerous articles and book chapters on different aspects of Caribbean literature and culture. She is also the editor of Agenda: Special Issue on Derek Walcott (2002-2003) and co-editor of The Cross-Dressed Caribbean: Writing, Politics, Sexualities (University of Virginia Press, 2013) and Surveying the American Tropics: A Literary Geography from New York to Rio (Liverpool University Press, 2013). Her research has been supported by the AHRC (2006-2011), by a Leverhulme Research Fellowship (2012- 2013) and by the ESRC (2016).
Share this...