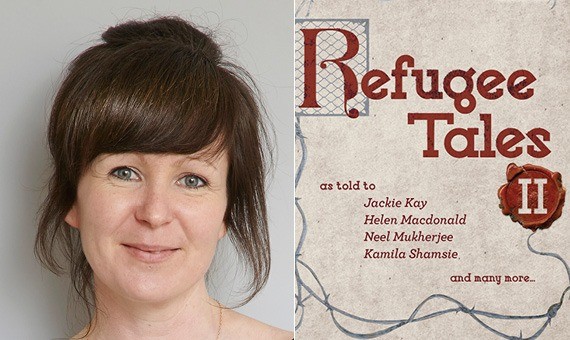 Olivia Laing is a British writer and cultural critic. She is the author of three books: To the River, The Trip to Echo Spring and The Lonely City. Her tale ‘The Abandoned Person’s Tale’ appears in Refugee Tales: Volume II, which is out now from Comma Press.

Tell us a little about how you became involved with Refugee Tales.

Ali Smith suggested me to Anna Pincus, one of the founders of the project, and I leapt at the chance to be involved. It’s really a project I believe in deeply. Freedom of movement and kindness to strangers seem like the founding principles of a civilised world to me.

How did you go about writing your tale? And can you say any more on the person you featured?

I spent an afternoon talking to the refugee in my story at Kings College, in a tiny room in the basement. I was really conscious that he’d been questioned and made to tell his account of his life hundreds of times, so I wanted to be very gentle and unprobing, while still discovering what had happened, and especially how he had felt about it. He was very low at the time, because the struggle to gain the right to remain had gone on so long, and because he’d lived in limbo all his adult life. I’ve since heard that he now finally has the right to stay, and very much hope he can now begin to fulfil his amazing promise.

Beds and sofas, airport lounges, a cafe in New York that looks onto a community garden.

A picture book about a man whose clothes are stolen when he swims in a forest pool and who has to survive in the woods. I can still remember the luminous drawings now: the physical sense of a book as something transporting, mysterious.

Something with very rich language, and ideally also some opium, so I could drift away blissfully. Maybe The Tempest or The Faerie Queen. I suppose that’s a bit impractical and a book about boat building would make more sense.

Coffee. And then back to work on my new book, Everybody, which is about bodies and freedom, a very apposite subject in these dark times.