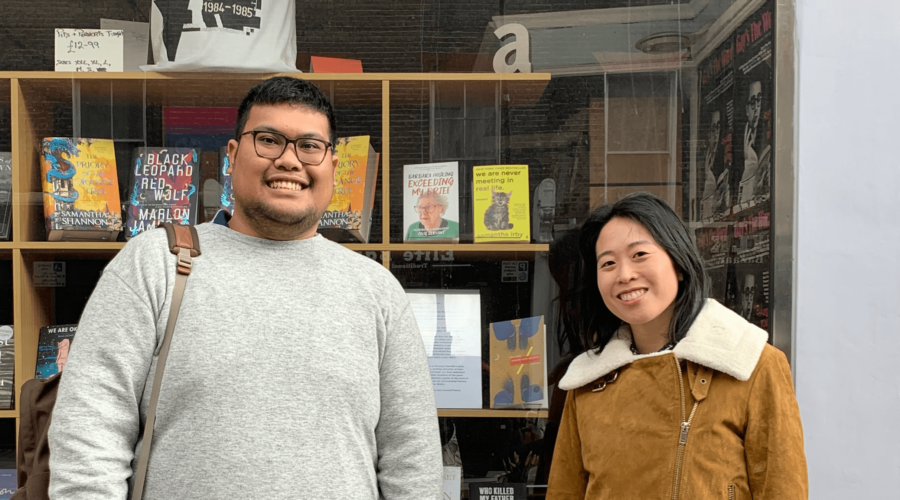 Norman Erikson Pasaribu is a poet and writer. His first poetry collection, Sergius Mencari Bacchus, was published in 2016 in his native Indonesia. Norman was approached by writer and translator Tiffany Tsao, and the pair then spent three years working together on Sergius Seeks Bacchus (2019), an English translation of the Indonesian collection which went on to win a PEN Translates Award. Norman and Tiffany are working together on translating Tiffany’s English-language novel, Under Your Wings, into Indonesian, and have developed a close, collaborative working friendship. They corresponded by email with Wasafiri’s Emily Mercer.

Tiffany, in your end note to Sergius Seeks Bacchus, ‘Beyond the binary – a note on translating’, you say that the roles of author and translator on this project were ‘mingled and merged’, and you’ve also called it ‘a very equal and liquid collaboration’, which is such a lovely description. What was made possible by this radically collaborative style of translation?

Tiffany Tsao  The English versions of the poems simply would not have been possible without our close collaboration. When I translate, I naturally tend towards the conservative because I don’t want to introduce changes that the author might feel uncomfortable with. I don’t want to alter someone else’s voice. It is a great responsibility to be entrusted with another’s words and I try to take that responsibility seriously. Working alongside Norman made me more confident about taking certain liberties, being ‘more poetic’ as Norman liked to say, because I knew Norman would tell me if there was anything about my translation that he thought could be improved. And thanks to Norman’s poetic genius, we were able to create anew in the English versions rather than simply trying to replicate faithfully the Indonesian ones.

You worked on the translations through WhatsApp, and even co-worked on Google Docs while WhatsApping. What has been the importance of these 21st century ways of communicating for your collaborative translations?

Norman Erikson Pasaribu As a person who grew up in a working-class family, I tend to be very practical when it comes to how we should do things. Often when people talk about the creative process, some tend to mystify the ‘writing ritual’ – which I don’t have at all. As long as I am well-fed and have a gallon of water and electricity, I write with my laptop. I think it goes the same when Tiffany and I work together. We both are too lazy to be ‘distant’ and ‘formal’! The boundary between us is built and maintained via respect. I think it works for us.

TT  Yes, I love how instant textual communication over long distances can create an environment where we fuel each other’s creativity, provide encouragement to one another, and can take ‘breaks’ where we also deepen our friendship with each other too. It makes the whole process more human and fosters more trust. Having said that, it works very well for us, but I’m not sure if it would work for everyone. I think author-translator pairs should assess the situation for themselves: it is a working style that requires a lot of trust and for each person to respect the other’s boundaries.

One of my favourite Norman quotes is, ‘queer liberation can only happen if we imagine it.’  You’ve imagined queer liberation in Sergius Seeks Bacchus through speculative work (‘Scenes from a Future Life’, for example), but also by queering historically and biblically. Norman, could you speak some more about imagining our way towards queer liberation?

NEP  I think it’s not an exaggeration to say imagination paves our way to the future. Imagination is always a machine of realities. It dreams of our direction and how we get there. But we always need to check whose imaginations are currently served in our reality today.

An example: I grew up with heterosexual love stories. Even the stories that portray homosexual love I read when I was a kid are often written by hetero writers. There, queer love is not something we empirically feel, not something that overwhelms us, because it is too whole to contain. Instead, its intensity was controlled, reduced into an object under examination–sometimes exoticisation. This is an example of the prevailing imaginations restricting what is allowed to be imagined. So… how can we dream a future queerness if we don’t experience its actual past and present form, but only this queerness masked by hetero imagination?

Standing on an ongoing erasure, I think it is important to just break free and spill a colour.

John Boswell, a historian who was also queer, whose books are among the foundations of my work, was often said to be ‘too speculative’ when he suggested that the early Christian community was more queer-embracing. But what Boswell did was disrupt history in a way that is now generally accepted. This is a form of deheteronormalisation. So for me: let’s all be queerly speculative. Because it can be our ground to build our future-queerness.

In your earlier answer, Tiffany, you said that you felt that you and Norman “were able to create anew in the English versions rather than simply trying to replicate faithfully the Indonesian ones.” Could you give some examples of this kind of new creation that came about in translation?

TT  Translation definitely has the potential to simplify and streamline or to complicate and multi-dimensionalise. By way of a very simple example: the Indonesian word tumbuh appears twice in the last two lines of the original version of  ‘On A Pair of Young Men in the Underground Car Park at fX Sudirman Mall.’ I actually translated one instance as ‘bloom’ and the other as ‘growing’. Even though the literal translation of tumbuh is ‘grow’, I feel it actually has a springy, sudden quality to it that the English ‘grow’ does not have, so I wanted to use both words to capture this:

why they were the ones who had to show love

can bloom anywhere, even in the dark, and that love growing in the dark

is no less life-giving.

Another example, from ‘She Died Making Pancakes’: the appearance of the pancakes (panekuk) is actually never described in the original, but Norman told me that actually the pancakes he had in mind are green, flavoured with pandan leaf extract, and have soft centres and wide-rimmed crispy edges. These pancakes have a more apparent working-class ‘Bekasi’ association (Bekasi is the city adjacent to Jakarta where he grew up and currently lives), which Norman wanted to convey. How could I do that in the English version? I remembered these pancakes from my own childhood, and thinking of them as green flying saucers, so I put that in the first line and asked if he thought it was too much. And he said he liked it, so we kept it. From just ‘pancakes’ to ‘pancakes—the green flying saucer ones he loved’. Imagine that!

You are currently working together on a translation from English into Indonesian of Tiffany’s novel Under Your Wings. How are you both finding that role reversal of author/translator?

NEP I feel happy and honoured because I love that novel. I can’t stop reading it. I also grew up with many Chinese families because there are many internal-migration (aka rantau) families where I grew up, including mine. Translating this novel reminds me where I come from. And I love this novel because it rejects the monolithic assumption about Chinese families. It has nuance and offers an important interrogation of how we look at Indonesia and its people.

TT  Let me just say, the fact that Norman loves Under Your Wings makes me so ridiculously happy I want to explode. I don’t think of this as a role reversal so much as an extension of the relationship we developed when I was translating Sergius Seeks Bacchus. The foundation of trust and mutual respect that we laid while translating Norman’s poetry collection continue to be the foundation upon which we will work for this project, which is still quite nascent. So far Norman and I have corresponded on his translation of the first chapter. There are still many, many more pages to go!

Sergius Seeks Bacchus is published in the UK by Tilted Axis Press.