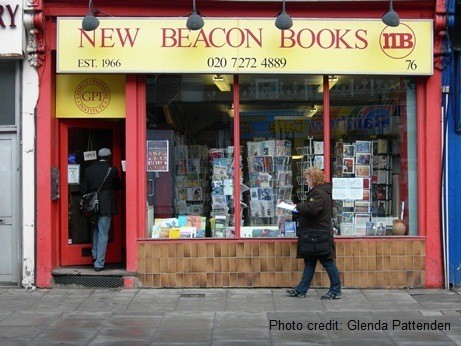 By Wasafiri Editor on January 18, 2015 in Articles

The enthusiastic first meeting of the New Beacon Book Club took place on a wet March evening in North London. A group of readers met to discuss Foundations, the first volume of poetry by Trinidadian poet and erudite activist John La Rose. Our first session was introduced by Linton Kwesi Johnson, who worked alongside John La Rose for many years.

John La Rose was born in Arima in 1927 and founded New Beacon Books in 1966 with his partner, Sarah White. This publishing house and international book service was soon joined by a bookshop in Finsbury Park. The shop (www.newbeaconbooks.co.uk) has been a landmark for readers interested in Caribbean, African, or black diasporic material ever since, as well as a hub for local and global forms of community activism. 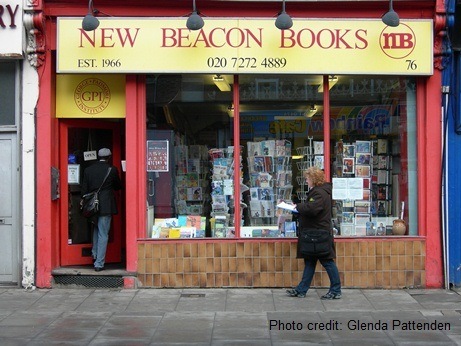 The Book Club is part of the Lottery-funded ‘Dream to Change the World’ project and meets at the George Padmore Institute (www.georgepadmoreinstitute.org), an archive, educational resource and research centre housed above the New Beacon bookshop. It is an open forum that welcomes different generations of readers to talk together about early books published by New Beacon. Extracts from the texts are circulated before each session and our conversations are introduced by someone with specialist knowledge of each book. For more information or to take part, please contact info@georgepadmoreinstitute.org.
Responses to the poems
Linton Kwesi Johnson:
John was a poet of ideas and emotion who wrote private and public, personal and political poetry. As some of the poems in Foundations show, there is often no clear demarcation between the personal and the political in John’s poetry. Some of the poems are tightly crafted; occasionally we find an example of the “unspeakable” not quite finding articulation. John’s diction sometimes seems idiosyncratic with the use of words like “unstatisticated”, “preterite” or “knout”. He writes mostly in English but at times he opts for his Trinidad dialect, and there is one poem in the collection, ‘Fantasy In Space’, which is written to be accompanied by “kaiso or other related folk music”. Some of the poems in Foundations are complex, some achieve great rhetorical flourish, some are quietly meditative. As a first collection, Foundations offers ample evidence of a poet of depth, passion and potential. That potential was realised with Islets of Truth Within Me, John’s second and last collection of poems.
Rob Waters, Doctoral student and GPI volunteer:
Linton Kwesi Johnson, facilitating the George Padmore Institute’s reading group on John La Rose’s poetry, introduced ‘Word Creatures’, the opening poem of La Rose’s Foundations, as a ‘manifesto’ to the short work. And certainly this is a poem that anticipates the themes that La Rose takes up throughout the collection:
These words
Come not trippingly,
But fall unspeakable,
From islets of truth
Within me.
Foundations is a collection about finding the poetic language with which to express a Caribbean experience. But if this is a manifesto, it contains neither the didacticism nor the unswerving certainty that such a term usually evokes. La Rose’s words are
Shouting for diction
truncated
In pained secretion.
The poetry that La Rose brings forth is clearly a painful birth, caught in the paradoxical space between ‘torrential anger’ and ‘slow transfusion’
Undernourished,
Searching its way
To surface and illusion
Impossible of definition.
But this is, rightly, a manifesto of the best sort: angry yet eloquent and, crucially, always alive to a politics of the future while never forgetting the past. Reading these poems collectively, 47 years after their first publication, it was their generative qualities that were most pronounced. These were poems always open to future uses, but resolute in the humanity and commitment that they demanded these be framed in. These were ‘utterings, / Unkempt children’ that would, and did
Loose their mooring
And chant their own paean to the morning.
Heiba Lamara, GPI volunteer:
In ‘Song To An Imperishable Sunlight’, John La Rose weaves together the names of Accabreh, Cudjoe- ‘Men of 1723 and 1729’ — George William, Toussaint, Bogle, M’zumbo Lazar, Alcazar, and Jacob Thomas in a defiant declaration of historical consciousness. The poem is La Rose’s panegyric, Linton Kwesi Johnson said on the night, to the men of the African diaspora, along with the ‘blackmen of the past, / forever nameless’,  who fought for and secured their future. 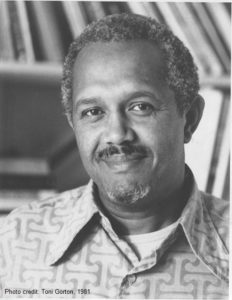 The poem prompted members of the book club to undertake further research to understand the significance of the named figures, share their knowledge with the group, and in doing so attempt to collectively piece together the poem. It was an exercise that inadvertently acknowledged La Roses’ role, and the role of literature, in mediating a collective sense of the past. For La Rose, there could be no redemption of the present without remembrance of and kinship with ‘our dead’, of those who ‘foreswore the present/ who foresaw the future’. It was fitting then that the New Beacon Book Club should take place in the George Padmore Institute, one of those passages to the past that he helped create.
Share this...