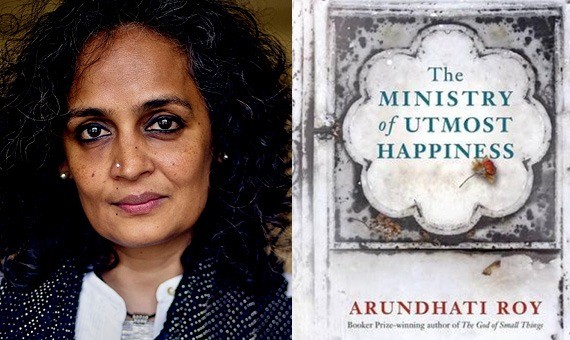 The opening chapter of The Ministry of Utmost Happiness asks us to consider where old birds go to die. Soon after, in Arundhati Roy’s trademark lyrical prose, we are introduced to the enigma that is Anjum. The discordance between her surroundings and her body builds as we learn about her early years lived as a boy. At the age of fourteen, she runs away from home and moves to Khwabgah, the house of dreams. The residents of Khwabgah differ greatly in their origins, experiences and self-identity, but have one thing in common, they are outcasts of society. Though some residents are happy to be identified as trans, Anjum prefers to be called a hijra.

Through Anjum, Roy introduces us to an array of characters (Saddam Hussein, Zakir Mian, Ustad Kulsum Bi, Gudiya, Sayeeda, Zainab and Ishrat to name a few) and just when we start getting invested in Anjum’s quest to become a mother, we realise that Roy’s book is not about one story, but many. Rather abruptly, and seemingly without any connection to Anjum, we are introduced to Biplab, Naga, Musa and Tilo, college friends who first met in the mid-1980s. The heart of the novel revolves around these four friends.

Thirty years later Biplab is a senior officer in the Indian Intelligence Bureau. Naga forges a career as a popular leftwing journalist. Musa becomes an underground freedom fighter in Kashmir. Tilo’s character remains mysterious. As the years pass, their interconnected lives start to unravel, each friend representing a conflicting ideology pulling at Kashmir. The narrative at this point moves back and forth rather quickly before settling down into a series of official reports, witness recordings, immigration forms and forgotten notebooks that tell the scattered story of Kashmir.

Throughout the book Roy deftly invites her readers to view alternate experiences of living in India. From the outcasts to the untouchables, from the marginalised to the misunderstood, from the war-torn Kashmiris to the rebelling Maoists, from domestic abuse to suicide, Roy covers it all. Towards the end of the book, we are confronted with another question, ‘How to tell a shattered story?’. The response follows swiftly, ‘By slowly becoming everybody. No. By slowly becoming everything.’

It’s apparent that this is what Roy is doing with her latest novel, becoming everybody and everything. On publication day, Roy was in conversation in Birmingham and I was lucky to be in the audience. The talk was preceded by a six-minute clip of visuals and sounds from the lives of her characters. The camera moved through narrow lanes and the voice introduced Anjum, ‘When people called her names – clown without a circus, queen without a palace – she let the hurt blow through her branches like a breeze and used the music of her rustling leaves as balm to ease the pain.’

In 1997, Roy donated her Booker Prize money to the Narmada Bachao Andolan, a social and inclusive movement protesting the construction of several dams built across a river that flows through three states. The construction meant displacing millions of villagers. Not only did she help the movement financially, she also became an active voice against the government and brought the struggles of marginalised people to the forefront. This struggle of a displaced community is shared in the book through a street dwelling security guard whose job is to make sure no one urinates on an advertising space by a public toilet.

During her 20-year break from fiction, Roy was busy protesting against India’s nuclear missile testing and accepting invitations to march with Maoists. The left named her India’s moral compass. She took active part in various political discussions and made some powerful enemies. In early 2017, a Bollywood actor publicly asked for Roy to be tied to an army jeep and used as a human shield. Over the years several threats have been made to Roy’s safety but they haven’t stopped her from standing up for her beliefs. When questioned about the precarious position she is in, Roy admitted to being aware of how privileged she is to still be alive and then wondered aloud if she is alive because she is privileged.

As an Indian with minority origins myself, I’m eternally grateful for Roy’s political stance, her fearless reporting, and her desire to give voice to the silenced. In 2004, when receiving the Sydney Peace Prize, Roy famously said, ‘There’s really no such thing as the “voiceless”. There are only the deliberately silenced, or the preferably unheard.’ The Ministry of Utmost Happiness is a collaged commentary informed by her politics but it is also Roy’s way of giving voice to the unheard.

In fact, the book is full of characterisation of marginalised experiences. We hear from the Muslims and the queer, the missing and the murdered, the dying and the dead. We read about the Gujarat massacre, the Bhopal disaster, the Sikh genocide and the public lynching of cow killers. We learn about the Kashmiri widows and the hunger strikes.

The book is very different from The God of Small Things and Roy was quick to distance her new novel from her previous work. She insisted there was no connection between the two novels but did say that she thinks of Tilo as the child of Ammu and Velutha. Tilo’s story is revealed in sporadic bouts and is the thread that keeps the narrative together.

The novel is ultimately rewarding and eye-opening. Roy has beautifully and hauntingly humanised the news stories making headlines in India for the last three decades. When asked what she would like the readers of her second novel to know, she said that she hasn’t fully understood the book herself and thinks the readers might need to read it more than once to truly understand her characters. She wasn’t being arrogant, just helpful.

The Ministry of Utmost Happiness is published by Hamish Hamilton.

Zeba Talkhani is an Indian writer based in the UK. Her work explores themes of identity, faith and social deconstruction. She was most recently published in 404 Ink’s Nasty Women anthology. Find her @zebatalk.