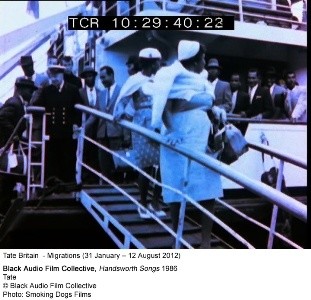 By Michael McMillan on January 17, 2015 in Articles

Immigration is a politicised discourse in which immigrants tend to be demonised as aliens, different, strange, even dangerous – read ‘terrorist’ – others, rather than people contributing to the national culture and economy through their skills, talents and labour. It is therefore courageous and timely for Tate Britain to mount an exhibition entitled Migrations: Journeys into British Art. Based on the premise that migrant artists have altered the landscape of what is perceived as British Art, the exhibition is divided into nine sections beginning with the sixteenth and seventeenth centuries and finishing with contemporary art practices. Curatorially, these sections also mark out themes, genres, movements and practices: ‘Portraiture and New Genres’; ‘Italy, Neoclassicism and the Royal Academy’; ‘Dialogues between Britain, France and America’; ‘Jewish Artists and Jewish Art’; ‘Refugees from Nazi Europe’; ‘Artists in Pursuit of an International Language’; ‘The Dematerialised Object’; ‘New Diasporic Voices’ and ‘The Moving Image’.

While these sections follow a temporal trajectory, there is no narrative thread that links them. There are also some omissions, such as of works by Lucian Freud or Frank Auerbach, who both came from Berlin in the 1930s. That said, the presence of the stylistically fresh portrait of Charles I by the Antwerp-born court painter Anthony van Dyck (pictured) and the grand panorama of Caneletto’s London: The Old Horse Guards from St James’s Park support the curatorial ambition to show how portrait and landscape genres for instance, perceived as quintessentially English or the establishment of the Royal Academy, have in fact been heavily influenced by mainland European artists.
As Paul Goodwin reminds in one of the catalogue essays, ‘People don’t make the journeys to come and die, they make them to come and live.’ The motives for many of these migrant artists coming to Britain were to escape war, political and economic instability, or religious or ethnic persecution in the case of Jewish artists leaving Nazi Germany. They also triggered different degrees of xenophobia, such as the 1905 Alien Act targeting Jewish immigration. This generated an assimilationist response from Jewish artists, as shown in the catalogue for the Jewish Art and Antiquities exhibition at the Whitechapel Art Gallery in 1906, which argued that the artists, like Jewish people generally, had identified themselves with their adopted country. Ironically, the subsequent exhibition The Twentieth Century: A Review of Modern Movements, also at the Whitechapel Art Gallery (1914), would include a ‘Jewish Section’ that attempted to connect Jewish artists and modernism, as illustrated through Mark Gertler’s neo-primitive (intuitive) Jewish Family. What this shift signifies is the acute fluidity of identity and negotiated positions that migrants, especially migrant artists, have to encounter.
These white European and American artists, such as James McNeill Whistler, were usually referred to as to as ‘émigrés’, rather than the more politically charged ‘migrant’ or ‘immigrant’, which signified their ability to access a bohemian artistic network that included Paris, New York and London. As Kodwo Eshun argues in one of the exhibition catalogue essays, quoting from Perry Anderson’s essay ‘Components of the National Culture’ (New Left Review, July – August 1968), ‘…they managed, simultaneously, to reinforce the “existing orthodoxy” and to exploit the “weakness” of an establishment defined according to antiquated beaux-art principles’.
In contrast, Caribbean artists such as Frank Bowling and Audrey Williams and Indian artists such as F N Souza and Avinash Chandra coming to Britain in the late 1950s and early 1960s, though creatively engaged with modernist art, would find themselves sidelined and viewed solely as ‘exotic’, in terms of their ethnicity rather than their work. Both my parents came from St Vincent & the Grenadines and, like Bowling and Williams, were ‘arrivants’, to use Edward Kamau Braithwaite’s term, from colonies where they were imbued with English culture. Like the writer George Lamming, Bowling and Williams saw themselves as beneficiaries of western art, classical and literary tradition, and for them ‘London was the Place to Me’, to echo the calypso Lord Kitchener’s famous words.
The red, yellow and green vertical stripes over blurred outlines of South America and Africa in Bowling’s painting Who’s Afraid of Barney Newman seem to aesthetically echo the Rastafarian iconography as much as the radical black politics and counter-culture which would impact a generation like myself born and educated in Britain. Within the context of post World War II migration from the Caribbean, Africa and South East Asia, the exhibition, unfortunately, does not engage with this intergenerational dialogue between first generation migrant artists such as Bowling, Williams and Rasheed Araeen for instance, and second generation migrant descendants grappling with identity, displacement, diaspora and what it means to be black and British in their work. Indeed, while works such as Sonia Boyce’s From Tarzan to Rambo: English Born ‘Native’ Considers her Relationship to the Constructed/Self Image and her Roots, Keith Piper’s Go West Young Man and Donald Rodney’s In the House of my Father in the ‘New Diasporic Voices’ section may have been made in the 1980s, they resonate with many contemporary subjectivities today.
If the moving image as a medium lends itself to the mobility of migration, then Zineb Sedira’s Floating Coffins fourteen-screen installation suggests a beginning as much as an end in our relationship with the sea. Sedira beautifully captures visually and aurally the wasted landscape of the largest ship graveyard in the world on the coast of Mauritania (pictured), which is also a departure point for West African immigrants. In a post 2011 riot era, Black Audio Film Collective’s seminal poetic film essay, created in 1986, Handsworth Songs, which responded to the inner city riots of 1981 and 1985, has to be mentioned, because, as it says, ‘There are no stories in the riots only the ghosts of others’ stories.’
–
Migrations: Journeys into British Art
Tate Britain, 31 January – 12 August 2012
£6 (£5 concessions)
www.tate.org.uk/britain
—
Michael McMillan is a playwright, writer and curator/artist whose recent work includes: The Waiting Room – an arts in health installation and publication (Gwynedd Museum & Art Gallery, Bangor, 2012), a new translation of Bertolt Brecht’s The Good Person of Sezuan set in Jamaica in 1980 (MAT, 2010), The West Indian Front Room (Geffrye Museum, 2005-06) and The Front Room: Migrant Aesthetics in the Home (Black Dog Publishing, 2009) (see www.thefrontroom.org.uk/). He has an Arts Doctorate from Middlesex University (2010).
Share this...