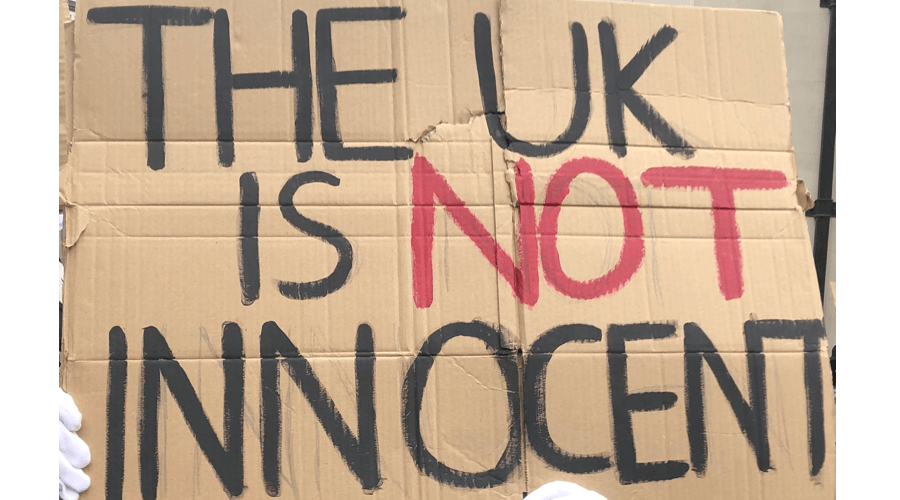 ‘BLM organisers call off London event [13th June] to avoid clashes with far right’, the Guardian headline reads on the very evening I’m writing this, less than thirty-six hours before I planned to participate in that Black Lives Matter protest now drawing the rage of rightwing extremists incensed enough to display their ‘patriotic unity’ on the heels of their and others’ outrage over this burgeoning anti-racism movement’s enormous success so far. Rage, perhaps over the racial and ethnic diversity of its participants, our energy and determination to challenge bigotry and racism in the UK and elsewhere, and – only a few days ago – the toppling by activists in Bristol of the statue of the 17th century slave-trader Edward Colston, a governing member of the powerful Royal African Company known for branding its initials, RAC, on the chests of all its trafficked slaves, even children. The statue was pulled off its plinth by cheering people of different colours, including many whites, its neck then knelt upon for minutes afterward in somber reference to the lethal atrocity visited by a white Minneapolis cop upon the body of George Floyd, and then rolled through Bristol’s streets and tossed into the River Avon where, hundreds of years earlier, African bodies bought and sold by Colston and others had arrived on ships. 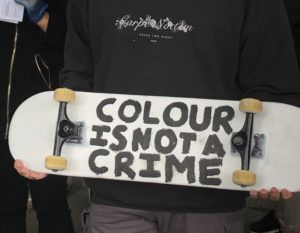 Black Lives Matter protests may have pushed British racists to fury, but so what? We’re angry too, and we’re sure as hell not afraid. Even in the midst of a global pandemic, we’re not afraid (although we probably should be)—and we’re mostly (but not entirely) wearing masks. Masked, taking part in this protesting fury throughout so many UK cities and streets. Look now and you’ll see so many teen-aged Muslim girls in hijabs last week in Birmingham, and then a few days after in London, shouting ‘Black lives matter!’ and ‘The UK is not innocent’, holding high aloft placards that say the same. You’ll see teen-aged white boys with words like ‘Colour is not a crime’ scrawled in paint on their skateboards, and lots and lots of energised, increasingly radicalised, ‘woke’ black and mixed-race people who have just had enough. 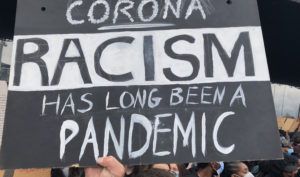 Enough of the fact that too many of us also can’t breathe. Haven’t been able to breathe for years, perhaps all our lives, and even longer. Enough of police killing of people like Sheku Bayoh in Scotland, 2015 (‘Say their names!’ we shout whilst marching). Enough of racist murders of black people throughout the world, including but not limited to the most recent and infamous: George Floyd, Breonna Taylor, Ahmaud Arbery, Botham Jean, Eric Garner. But we’re also remembering Stephen Lawrence (Eltham, 1993), Mark Duggan (London, 2011), Anthony Grainger (Culcheth, Cheshire, 2012), Sean Rigg (Brixton, 2008), and on and on. Too many to bear in memory, and way too many to forget. And absolutely not forgotten today. Not forgotten but angrily remembered and re-summoned in grief as we call out their names in Birmingham and London today, last week. Next month. Always. 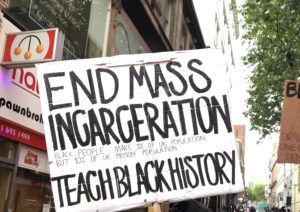 But now look at what these protestors are shouting in these chants: ‘Hands up, don’t shoot!’ (Yes, and we mean it.) ‘White silence equals violence!’ (It sure as hell does, more than any other type of silence: the silence of historical and contemporary perpetrators and the inheritors of the privilege.) ‘What do we want? Justice! When do we want it? Now!’ (Another rendition of call-and-response, with life-death stakes.) 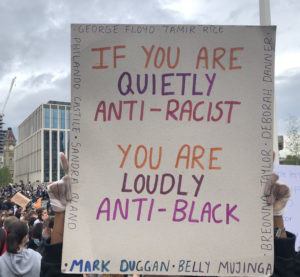 This is what twenty-first century anti-racism protest in Britain and the United States – and all over the world in solidarity protests – seems to look like. Mostly (but not only) young. Very young. Protests hashtag-begun and -publicised, advance notice for them tweeted and Instagrammed, and countless images of ourselves and others across the world captured, documented, in mobile phone videos and photos that also gather and present stark evidence of continuing police violence (such as the recent police teargassing and beating of BLM protestors in Washington, DC’s Lafayette Square). These images flash across TV news broadcasts, emblazon front pages of newspapers and magazine covers, and with the lightning speed of this century’s current technology, travel the entire planet within seconds. Speed and powerful protest images shared as – the very same day a memorial service is held for George Floyd in Minneapolis – thousands assemble in Birmingham’s Centenary Square and proceed to march from there through the city centre’s New Street, down to Snow Hill and back around up to Colmore Row. And back to New Street, and back through the city centre again. In London a few days later, thousands of us gather outside the fortress-like US embassy in Nine Elms, Vauxhall, and, gripping our placards and chanting (‘Say their names!’ ‘The UK is not innocent!’), walk northward over Vauxhall Bridge and up to Westminster, where one of our dearest grandfathers – a surprise many of us hadn’t expected – awaits us with open arms. All this after we’d knelt in front of the US embassy for a full eight minutes and forty-six seconds, the amount of time George Floyd remained a neck-bound prisoner under his killer’s knee (but even in grave reverence an unexpected humourous moment: an older woman in the crowd calls out, ‘Hold on, sweethearts…some of us ain’t so young anymore, can’t get down on our knees so fast’.) 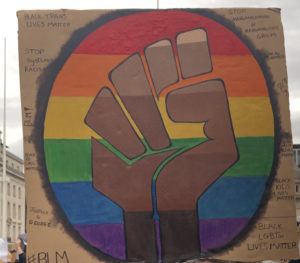 It’s more than moving. It’s indescribable. It does things to your eyes (and no, of course you’re not crying). It shows you that we’re all without question the grandchildren of the US and UK Black Panthers and all their historical kind. And it shows you – and this really hits deep – our dearest grandfather awaiting us with open arms upon our arrival in Parliament Square: the statue of a smiling Nelson Mandela, into whose arms we’re putting ‘Black Lives Matter’ placards as we take selfies with him. Those twenty-seven years weren’t for nothing, grandfather. We won’t permit them to have been for nothing. Now, say their names. Remember their names. For all time and evermore, we’ll make sure to remember all the faces, and all the names.

Thomas Glave is the author of four books, the most recent of which is Among the Bloodpeople: Politics and Flesh. He is the editor of Our Caribbean: A Gathering of Lesbian and Gay Writing from the Antilles, and has new work in Transition (2019). He is an associate editor of Wasafiri.