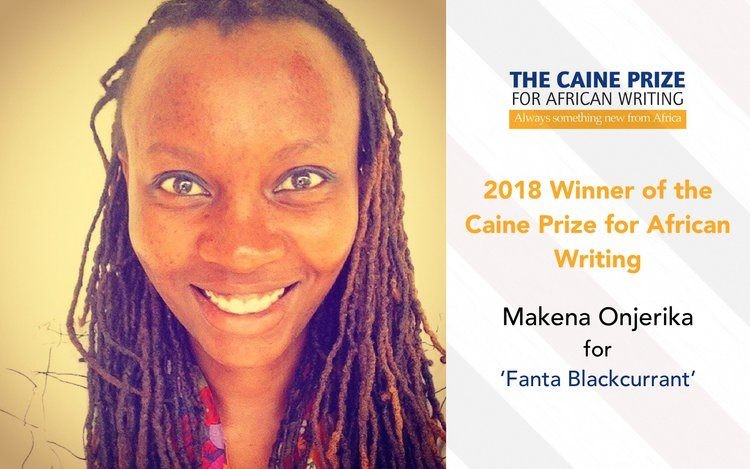 On 2 July 2018, Makena Onjerika was announced as the winner of the prestigious Caine Prize for African Writing for her extraordinary story ‘Fanta Blackcurrant’. The short story, which was first published in Issue 89 of Wasafiri, is a gritty tale set in the bustling streets of Nairobi. Told from the perspective of a group of girls struggling to survive and thrive in the Kenyan metropolis, ‘Fanta Blackcurrant’ offers an unflinching portrait of these girls’ experiences living at the margins of their society. It sheds vivid light on their desires as well as their heartache, emphasising above all else the spirited humanity of this community of souls.

When announcing the prize winner, Dinaw Mengestu applauded Makena’s story for being ‘as fierce as they come – a narrative forged but not defined by the streets of Nairobi, a story that stands as more than just witness. Makena Onjerika’s “Fanta Blackcurrant” presides over a grammar and architecture of its own making, one that eschews any trace of sentimentality in favour of a narrative that is haunting in its humour, sorrow and intimacy’.

Wasafiri caught up with Makena after the Caine Prize award ceremony and asked her some questions about her writing.

Matthew Lecznar for Wasafiri: Many congratulations on being awarded the 2018 Caine Prize for your story ‘Fanta Blackcurrant’. Everyone at Wasafiri is delighted for you! Could you tell us what winning the prize means to you and what impact you hope it will have on your writing?

Makena Onjerika: I didn’t expect to win. I was shocked to hear Dinaw Mengestu call out my name, paralysed for a few moments, actually. Getting shortlisted had me feeling motivated to write again after a five year break. You see, by the time I left my M.F.A. program at New York University, I simply could not write anymore. I had become too much of an editor, too conscious of my writing and the whole thing had become torture. So, I did what one of my professors advised. He said, “Quit, and see if you can live without writing. If you can’t, then you’ll know you are really a writer”. I stopped writing but I kept wanting to. Winning the Caine Prize has brought me full circle and made me understand the value of my writing, that there is some real value in it. I am now sharply aware that if I don’t write, my stories will never be written. No one else can ever write them.

‘Fanta Blackcurrant’ offers a moving and visceral portrait of a group of girls and young women struggling to survive on the streets of Nairobi. Why do you think it is important that this story gains the kind of international platform that Wasafiri and the Caine Prize provide?

Publishing internationally and winning international awards like the Caine Prize, has for many years now, helped African writers get the attention of agents, publishers and readers. It is no secret that most of our readers are in the U.K. and in the U.S., and while there are many new publishing avenues emerging in Africa, readership is still lagging behind, in my opinion. That said, I don’t think that ‘Fanta Blackcurrant’, as a story, required an international platform. The questions it asks are primarily for Kenyans, although others may feel that these questions are relevant to them as well.

Dinaw Mengestu, the Chair of the Caine Prize judges, has said of your story that it ‘presides over a grammar and architecture of its own making’. Were questions of grammar and voice – of how to effectively convey the lived experiences of the young women in the narrative through language – at the forefront of your mind as you wrote the story, or did the unique style of ‘Fanta Blackcurrant’ develop of its own accord?

Both. From the on set, I wanted my characters to speak for themselves. I knew that standard English would not quite do. I generally feel my way through stories. My choices are intuitive and I cannot really explain them.  The subconscious part of my brain just knows what works. I would argue that stories are products of specific circumstances of the writer’s life. And further, that stories belong to specific moments and influences. For example, the plural first person voice came from Julie Otsuka’s Buddha in the Attic. I cannot remember why I chose to create a chorus of voices around Meri or why Meri wanted a ‘Fanta Blackcurrant’ and no other soda. The story evolved as I evolved. I doubt I could write ‘Fanta Blackcurrant’ today. If I did, it would not be the same story.

As you are the fourth Kenyan to be awarded the Caine Prize – following in the eminent footsteps of Binyavanga Wainaina, Yvonne Owuor and Okwiri Oduor – what do these successes say about the vibrancy of Kenya’s literary scene?

It seems writing is a national sport, right up there with running. There are undoubtedly many many writers in Kenya, doing many different things. This is exciting to me. And I wish that reading would become as commonplace.

Finally, can you tell us anything about what you are working on at the moment? What should we expect from you in the future?

I am working on a collection of short stories about Nairobi. All my published short stories so far belong to that collection. I am also working on the first draft of a fantasy novel. I have sketched written scenes for two female and one male character so far, but there is much much more to learn about them and their world. I think you will see quite a bit of fantasy fiction from me in the future and much less realist fiction. Meri is unlikely to return in my work.

You can read Makena’s award winning story ‘Fanta Blackcurrant’ here or listen to Makena reading her the story on Soundcloud here.

Matthew Lecznar is a doctoral candidate at the University of Sussex researching artistic legacies of the Nigeria-Biafra war (1967-70). He is currently conducting an editorial and administrative placement with Wasafiri magazine, which is funded by the Consortium for Humanities and Arts South-East England (CHASE).