Make Sure to See the Exit Door by Miah Jeffra 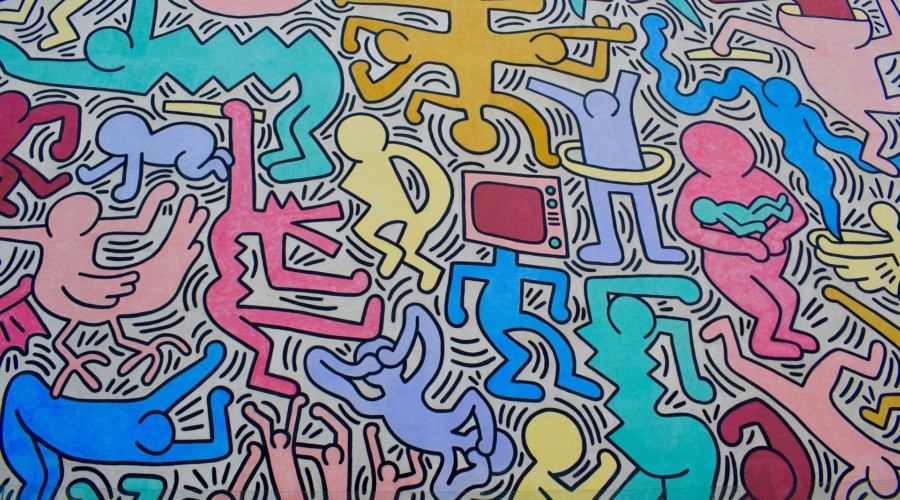 I’m on Craigslist again. I am angry, ten years ago. And this is Hollywood.

The Casual Encounters ads are scrolling faster than usual; every few minutes a host of two dozen or so repopulate the interface, almost the same rate I am pounding plastic-bottle Gin gimlets, Nina Simone lamenting the whip of Parisian wind amidst the clanging AC of my dilapidated pseudo-Craftsman Hollywood cottage. The hot windless day broke open some rising need. Not only in me, it seems; there is a flurry of M4Ms, of the typical photos—hairy chests and waxed chests, dangling and clenched dicks, finger-spread ass-cheeks and slightly parted lips filling the screen with overt sexual demands. I want to feel like a bandit, a punk, a renegade. Like you, Keith.

I first saw your artwork when I signed up for Best Buddies at a community service fair my freshman year in college. Your work was the poster image for the organization: simple faceless figures—one yellow, one orange—arms over shoulder in that classic buddy embrace, against a flat blue backdrop. Best Buddies paired students with mentally disabled adults to go on outings in the community: the zoo, Six Flags. I always took mine, Bobby, to the Krispy Kreme and Kentucky Fried Chicken on Ponce De Leon Avenue in Atlanta. We would take our pink box and family bucket to Piedmont Park and eat it all, lick sugary glaze off fingers and chew cartilage from bone after I got stoned on my cheap eighth of shake. I think we had a good time, me and Bobby. I was probably breaking the Best Buddies rules. I’m sure you would have, too, Keith.

That Best Buddies poster always made me feel— what’s the word? — jubilant. Perhaps it was the short black lines emanating out from the figures, like vibrations, suggesting movement. Bursting joy? Adolescent jittering? Like ever some kind of possibility. The colors told me: this artist is resolute, satisfied in his bold strokes. Sorry, Keith. I was young.

I thought there was some kind of possibility with a senior named Kent McKay, the other tenor in the University Singers chorale, who sat next to me, who tickled me during warm-up, the palest boy you could ever imagine. His thinning hair, the same color as his skin, resembled rough brushstrokes of a monochromatic portrait. He wore ripped jean shorts and no shoes, his feet cleft and mucky. His eyes bulged out, like a Boston Terrier’s, lips swollen and cracked like a glazed donut. And, I loved him. I even told Bobby about him while I smoked my schwaggy weed in the park, about the time when Kent and I were alone in the auditorium hanging lights for a Christmas concert and we discussed Judith Butler like we understood it, and he argued that Kinsey was right, and he kissed me and slipped his hands under my shirt, and we went back to his dorm room and I licked his fingers, and we cuddled and fell asleep in each other’s arms. My first hookup with a boy. A revelation.

Your animal drawings were always my favorite, Keith, especially the dogs, cats and chickens. I am an animal activist, too. Did you know that in order for a chicken to be certified ‘free-range’, all it needs is a minimum of five minutes of access to the outside? At Polyface Farms—a certified ‘free-range’ operation in Virginia—the ‘outdoors’ comprises 5×10-feet fenced-in gravel pits available through a doggie door at the end of the coop, a space to share with no less than 1,000 other chickens.

That one sounds punk rock. I click it. What do I get? A blurry cock flopped over the waistband of gym shorts. I reply with my body shot, flexing whatever little muscle I have. Another ad entreats, Are There Any Nice Men on Here Anymore? I skip. Cum on My Face? That sounds fun. I repeat with the sepia dick pic. I get a rather truncated response almost immediately: He asks me, ‘You a top?’ I write, ‘sometimes.’ He asks me, ‘You masculine?’ I write, ‘What does that mean?’ He asks me, ‘Stats?’ I write back that I prefer Analytical Geometry. He ceases correspondence.

After my sleepover with Kent, I spent three weeks worth of nights on the grass of the residential quad sitting under Kent’s window, waiting until his light went out, hoping he’d glance out the window, spot me under the fluorescence with my face of yearning, that romantic Hollywood someplace-far-away face. But he never did. You see, he never acknowledged that night in his dorm-room, not even when we woke up the next morning, limbs and sweat, a tangled bed. He quietly pulled himself away from the naked embrace while I pretended to sleep; he pulled on a pair of sweatpants and began studying at his desk, his broad stretch of back shielding the rest of him from my waking. The back told me that I needed to go, and I slunk out. At the end of chorale practice the next day, I touched his shoulder. He spun and dared me. He whispered through his soft face, ‘I’m not like you. I want a family.’ Within 24 hours, he had a girlfriend. I wrote him poetry, would leave it in his mailbox.

I remember a first line of one of the poems: What does it mean to be like me?

I remember a last line of one of the poems: I could love your paradox!

I didn’t discover how you really felt about all of this binary bullshit until much later, Keith, when I saw your other images. It wasn’t until I saw one in particular, of a headless body being strangled—not at the neck, but at the guts, all muscles and penis against a pink and glitter background—that I knew you were angry. After you had been checked in a bunch of recycled hetero boxes, after you had been rejected by countless lovers as too fem or too butch, too top or too bottom, too one way or the other, one or the other, apron or sledgehammer. How much liberation has there really been, that we still liken ourselves to Lucy and Ricky, to Ozzie and Harriet, to high heels and work boots?

Did you know, Keith, that even when the coop door opens for those ‘free-range’ chickens at Polyface, that five-minute opportunity to splay their chicken feet on that wide-open gravel and take in the sunshine, they don’t move? You would think they’d ache with the liberation and scuttle towards the door, clucking loudly until that first sliver of light cracks at the bottom of their coop, feathers pouncing in that push to the great big liberty. But, no. The door opens and they sit there, stunned and still, clucking like fools. Even, now, after all these years.

I’m angry, Keith. I’m wound, just like your own strangled gut. Liberty is a poly-face.

I am certified, now, and this is San Francisco. I have rights. I can even get married. The door has opened and the crack of light is bright and glaring, and I get my five minutes of sunshine. But I want more than the five minutes anyone is offering. I don’t want to be a certified free-range faggot. I want to roam the whole fucking farm. I want to wear the boots when I want, the apron when I want, to wield the sledgehammer while scuttling in the highest of heels, but more than that. I want none of it, so I can be all of it. I want to splay my feet on the grass of that college quad, only not looking up with a someplace-far-away face, but head-on. A renegade, against a flat blue backdrop. Because, like you knew, Keith, the only door worth walking through is the one to which you’ll never return.